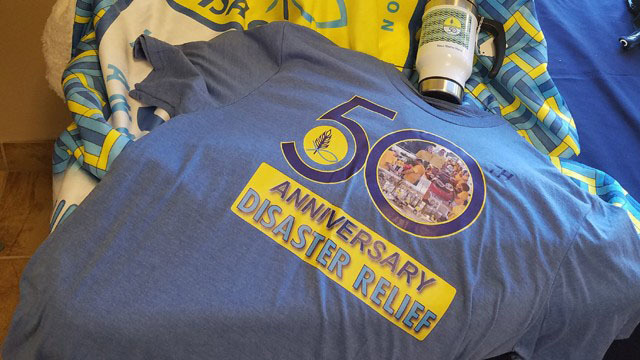 Representatives from nearly all state Baptist conventions participated in the Jan. 23-27 event at Camp Copass in Denton, TX. The week focused on celebrating five decades of ministry efforts, looking at the present state of DR and preparing for the future.

“Fifty years represents a significant event for us,” said Mickey Caison, executive director of SBDR at the North American Mission Board.

“Over those 50 years, we’ve responded to thousands of disasters, both domestically and internationally,” he recounted. “As part of that, we’ve seen thousands of people come to Christ out of that environment of damage and destruction. As we move through that process, we’re able to see people come to faith.”

“Trained volunteers have served thousands of meals through partnerships with the Red Cross and Salvation Army.”

He added that California volunteers have participated in hundreds of cleanup jobs and recovery efforts following earthquakes, floods and fires, as well as “nationally and internationally ministering to those affected by disasters in major events like 9/11, Katrina, Super Storm Sandy as well as tsunamis and earthquakes around the world” (see related story next page)

“California has led the way in providing emotional and spiritual care in the aftermath of a disaster by embedding trained chaplains with each team that is deployed,” Bivins continued, noting that “California Southern Baptist Disaster Relief desires to assist local churches in meeting urgent needs of hurting humanity in crisis situations by providing practical help and the hope of the gospel.”

At the Jan. 23 meeting the DR group heard from Bob Dixon and John Lanoue, who participated in the first SBDR response following Hurricane Beulah in 1967. Using campcraft skills from Royal Ambassadors, the men turned one-gallon cans into miniature stoves (called “buddy burners”) to prepare hot meals for people impacted by the storm.

Roundtable participants also spent significant time debriefing the past year’s deployments, including two floods in Louisiana and last fall’s response to Hurricane Matthew. The leaders discussed how, from those experiences, responses can improve.

“We looked at the need for more online training and ‘just-in-time’ training,’” Caison explained.

Sam Porter, the Baptist General Convention of Oklahoma’s state DR director, said SBDR has left a legacy among Southern Baptists in mobilizing a wide variety of volunteers for gospel work.

“It is a unique vehicle for people with Christ in their hearts and a passion to serve others that is set on ‘go’ whenever the world falls apart in some place,” Porter said. “It especially gives opportunities to those who may not feel confidence about their knowledge of the Bible or they don’t do well singing. When they get to use their God-given gifts or their learned talents in disaster relief tasks, they realize those abilities can be used greatly to impact the world for Christ and set up the opportunity for someone to hear the gospel.”

Roundtable participants spent much of the meeting discussing ways to get more GenerationX and Millennials involved.

“The volunteer pool we have is beginning to age out,” Caison said. “Medically and physically they are not able to go and do the kind of work that they’ve done in the past. We’re looking at how we better engage GenX and Millennials in the ministry.”

New volunteers are especially needed because Caison said SBDR’s ministry success has brought with it “much responsibility.” The Red Cross, Federal Emergency Management Agency, National Voluntary Organizations Active in Disaster and Salvation Army all sent representatives to the meeting to encourage the group to be prepared to deploy faster and with more volunteers.

“While they all affirmed us and encouraged us in our ministry, they did remind us that we have great responsibility,” Caison said. “Red Cross reminded us that it is incumbent on us to be responsive and available. Because of our partnership with them, they can’t do their job without us. They wanted us to continue to strive for stronger, faster responses, as well as longer sustainability in those responses.”

“Although about 250 people deploy in an average year, many others use their skills and training in their local churches and communities,” he explained.

Nationally Southern Baptists have some 65,000 trained volunteers, including chaplains, and 1,550 mobile units for a variety of ministries.

SBDR is one of the three largest mobilizers of trained Disaster Relief volunteers in the US, alongside the Red Cross and Salvation Army.