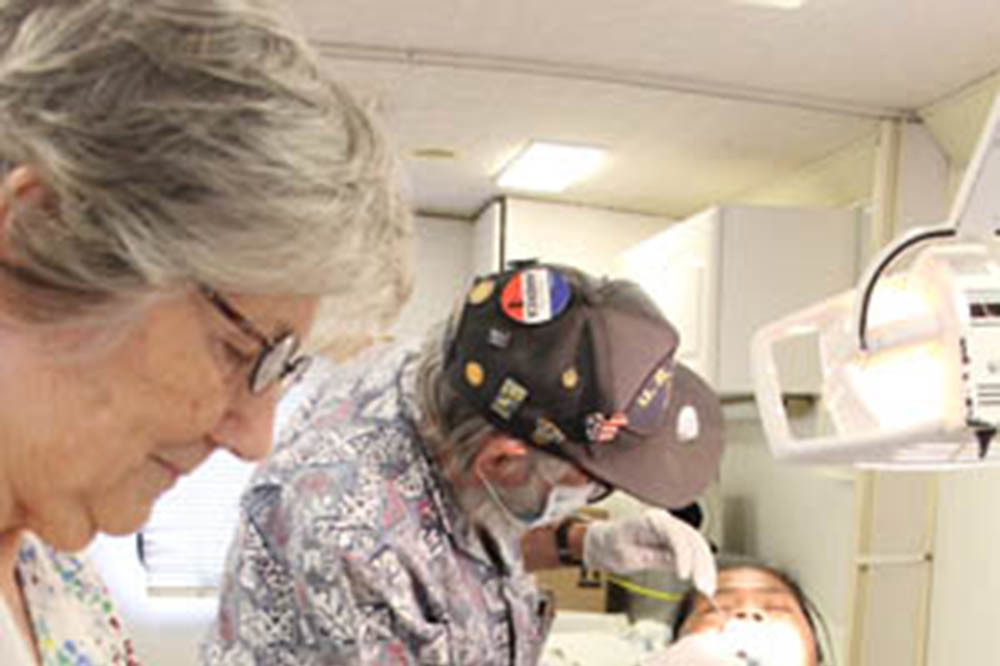 Dental ministry is for the Byrds

Not because of their “net worth” or their vacation home or days of indulgent luxury. They live a life rich in the eternal ways that matter – a wealth of deep and abiding friendships, rooted in a community of faith and years of generous community service. They live and work through their dental practice, grow and serve through Crossroad Church in Tustin, and minister annually as dental volunteers during the Feeding Those Who Feed Us migrant effort.

They pursue, with salt-of-the-earth steadiness, what the writer Eugene Peterson calls “a long obedience in the same direction” – and it makes for a rich life.

Not that Bob would describe it that way. To him, it’s nothing more than simple commitment and simple acts of service.
“We just enjoy what we do,” he said of the week he and Fran spend each summer working out of California Southern Baptist Convention’s mobile dental unit at the Tulare migrant center. “It’s a working vacation, but we enjoy it, enjoy doing dentistry, enjoy ministry, enjoy doing something for somebody. The people are so grateful, and it doesn’t cost us, doesn’t hurt us. It’s just rewarding.”
Feeding Those Who Feed Us began offering dental clinics six years ago, using a unit equipped with two chairs, an x-ray machine, a sterilizer and supplies. When Bob and Fran heard about the ministry opportunity, they asked for a schedule, offered the first full week after the 4th of July, and have been serving that week ever since. Bob is the only dentist who gives the whole week; others volunteer one or two days at their locations. Fran works alongside as his dental assistant.

The unit travels within 30 miles of the migrant center, and the Byrds meet it there. Oscar Sanchez, CSBC migrant ministries field specialist, coordinates the schedule for the dental clinics.

This year the Byrds saw 75 patients and performed about $60,000 worth of dental services. They work from 10 a.m. until 5 p.m. – or until the line is gone. Every patient gets a cleaning and examination; as needed, they also get fillings or extractions, though the unit is not equipped for prosthetics or crowns.

“Most of these people could not afford a local dentist, so we aren’t competing at all with local dentists,” Bob explained. “This is our sixth year, and some patients we’ve seen now for the sixth time, which is fun. It’s not often people look forward to seeing the dentist, you know! But they do.”

Like most dentists, the Byrds have also learned tricks for reassuring anxious children. And it’s the children who give Bob the most heartbreak:

“When I look in the mouths of these young kids, 10 to 12 years old, front teeth gone, I do what I can. But I know they’ll go back to Mexico or wherever they’re from, with teeth that need a lot more attention and repair, and they won’t get it and those teeth will just decay … . It breaks my heart to not be able to do more.”

The greatest need, though, Bob said, is spiritual.

“That’s why we witness to them, pray with them, share the gospel with them. And we always give them a Bible – and if they got one last year, we give them another one so they can give it away. We have Bibles in English and Spanish, and sometimes they’ll take the one in Spanish to read, and the one in English to practice their English skills!”

One man in his mid-80s had a tooth that had been hurting for a year, but he was afraid to go to the dentist. Bob and Fran extracted the offending tooth, using anesthetic. The patient jumped out of the chair and ran outside, yelling with relief and gratitude, “I did it! I did it! I did it and it didn’t hurt!”

“He was just so grateful, and that is just so rewarding to us,” Bob said.

The “missionary dentist” is originally from Memphis; Fran is from Mississippi. They met in Memphis, got married, joined the Navy, and were stationed for two years at El Toro Marine Base in Southern California, doing dentistry there.

“When we got out we felt like we needed to stay in California, and the Lord just made it possible for us to stay,” Bob said.

And they have certainly stayed. They have been members of Crossroad Church in Tustin since 1957 (though Bob explained the church has been through a number of both name and location changes in those years; most recently the name was First Baptist Church of Irvine/Tustin), singing in the choir for as long as they had one, Bob serving as a deacon. Their three children were raised there; their oldest, Roger, serves as California Southern Baptist Convention’s music and worship specialist.

Why take a vacation to work? Bob doesn’t seem to even consider the question seriously.