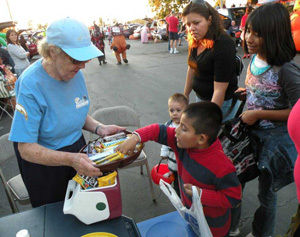 In the same way that the back side of the church property drops off into a steep canyon, one major earthquake away from losing parking lots and outbuildings, members know the church is an island of hope perched high above a sea of multicultural lostness.

Del Cerro members reach out across San Diego in a variety of ways to reach disparate people groups, starting with their support of the Annie Armstrong Easter Offering. The 280 people who participated in Sunday morning worship services last year gave a per capita $31.89 – which totaled $8,960.02 – in 2011 to the annual offering for missions in North America.

“The world has come to us; we’re surrounded by people from other places,” said Mark Milwee, pastor at Del Cerro since 2009. “America today is one of the largest mission fields in the world. … We need to reach out in every direction, and what better way than to support the North American Mission Board?

“I feel strongly that our local church ought to reach out in hands-on ministry, but in addition to that, our (Southern Baptist) Convention has provided this wonderful opportunity – the Annie Armstrong Easter Offering – for every church in America to help reach North America,” Milwee continued.

Del Cerro has a long-established zeal for missions. Loura Nugent, a member for 40 years, explained why.

“We collectively keep missions in the background or the foreground of what is going on at the church,” Nugent said. “We present many ways to be involved in missions: pray, give, go, help. For those of us who have a passion for missions, it is our responsibility to keep the flame burning, to keep the fire stoked.”

The need for a gospel witness across North America is great, Nugent said.

“Statistically, far fewer people in today’s society are interested in Christianity, and we are seeing the first – or maybe the second – generation of pagans being raised by pagans, people who haven’t had any exposure to God,” Nugent said. “Giving to the Annie Armstrong Easter Offering for North American Missions is one way we can change this, by sending out church planters and missionaries who are committed to giving a gospel witness that transforms people’s lives.”

Among Del Cerro’s local projects: gathering school supplies for Centro Shalom, a church in Tijuana the congregation helps sponsor; participating in a three-day military outreach to homeless veterans; and sponsoring a mid-summer, week-long sports camp with the help of Flint River Baptist Church in Huntsville, AL.

Del Cerro’s largest community outreach is the annual Christmas Story Tree, which is the grand finale each night in a city-wide, two-night “December Nights” event that takes place in Balboa Park in downtown San Diego. About 5,000 people each night watch the performance that tells the story of Jesus, from birth to death and resurrection. A narrator tells the story between musical interludes by the Del Cerro choir.

City leaders ask Del Cerro to bring the gospel-centered presentation each year, Milwee said. The production has been a part of the city-wide emphasis since 1986.

Del Cerro church planting efforts date back to the starting of the church, with several second- and third-generation congregations started in the years following new church plants. Mission Trails is one example. It’s a new plant with two campuses – both at area schools. Del Cerro provides office space for the church, started in 2008 by Pathway Church in Santee, which Del Cerro started in 1993.

“Mission Trails does a lot of their new member things here at our church, such as discipleship classes,” Milwee said. “This year we opened the church one night a week for their youth group. This means they’re not having to spend a lot of money they don’t have in facilities. It allows them to put more of their money into ministry.”

The use of its building to save missions dollars is one way Del Cerro maximizes the effectiveness of Cooperative Program and other offerings its members give to missions, the pastor said.

“Our total missions giving in 2011 was $98,182 … and I’m proud of that because our total budget giving for the year was less than $647,632,” Milwee said. “One of the reasons our giving is so high is that we have a box on our giving envelopes designated for missions. If they check that box, what’s inside the envelope goes 60/25/15 percent to international, North American and California mission causes.”

Recently, Del Cerro helped start The River SD on the campus of San Diego State University. Del Cerro starts churches and gets involved in ministries when individual members give evidence that God is in the work, Milwee said.

“We have a Spanish ministry that meets in our fellowship hall; the children attend all our children’s activities,” he explained. “We also support Central Shalom in Tijuana. They have a church, feeding ministry and free medical clinic. … Our church has regularly supported this ministry for years.”

Del Cerro partners with a church in the American Baptist Convention in the planting of a church for Karen refugees from Burma.

“This began in the fall of 2008,” Milwee said. “It’s a kind of neat partnership, I think, because we both are working together to help this church get going. We’re both contributing funds.

“We’re also active in other ways,” he continued. “We hired Aaron Webb* in the summer of 2009 to be half-time at the church in student ministry, and half-time at San Diego State University in collegiate ministry.”

Andy and his brother David have a campus ministry called Challenge that has grown to involve about 100 students. They started a similar ministry at Grossmont Community College that already has about 25 students participating. Their newest: Cuyamaca Community College in Rancho San Diego, which has about 25 students involved. In addition, about a dozen international students meet with the Worcesters at the church on Thursday evenings.

And at the La Mesa church, the youth group “has really grown,” Milwee said. The youth went to San Francisco last summer, and this summer are going to Seattle to participate in PowerPlant, a NAMB-sponsored ministry involving high school students in church planting efforts.

The senior adult “Joy Makers” at Del Cerro went on a spring choir tour to Arizona in 2010, where they sang in area nursing homes and other venues. This fall they’re planning a trip to the southeastern United States with a similar agenda of singing and sightseeing.

“It was a great reminder that we’re not finished in ministry yet, and that age doesn’t have to limit our ability to impact others for Christ,” wrote Andy and Rebecca Anderson, senior adult leaders at Thomas Road Baptist Church in Phoenix, after hosting the Californians. “I know many in our group were inspired by the Joymakers to be more active in ministry.”

“We’ve really been stressing that a healthy church is a growing church,” he explained. “I’m just trying to help the church tap back into its heart and continue … its commitment to missions.”