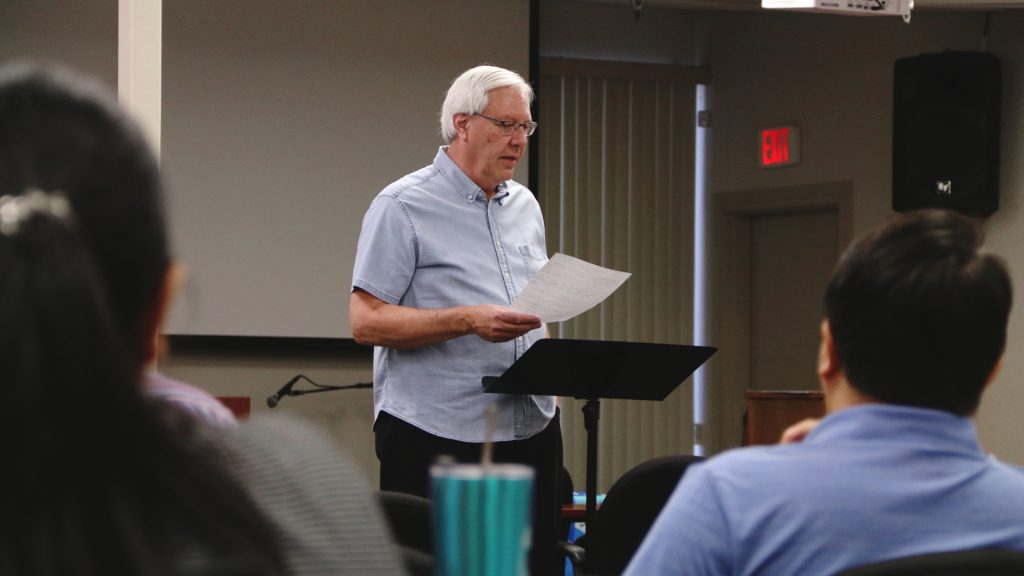 Ramirez said people have been asking him about his vision for CSBC. “I want my vision to be a collective one involving as many partners as possible. It’s not something that will happen overnight, but will take months to develop.”

He said one of his first steps in casting that vision was meeting with CSBC staff in June. He said he will confer with many others before formulating his vision for CSBC and her churches.

During the staff gathering on July 11, reports of ministry progress were given related to evangelism, missions, church planting and church revitalization.

Staff also were apprised of a “good and stable” financial position through the first six months of the year by Marc Tempesta, CSBC chief financial officer. He noted gifts for the period total $2.95 million, just $50,000 short of the $3 million budget mark for January-June.

“We are where we need to be to have stability,” Tempesta said. He noted CSBC will need to monitor economic trends to see how inflation impacts giving by churches and spending by staff since “we’ve already seen an increase in travel expenses.”

On the ministry front, Jason Blankenship, leader of the Evangelism Initiatives Team, reported 415 professions of faith from 68 churches which received CSBC grants for evangelism projects in California communities during the second quarter of this year. He also reported 342 rededications and 80 baptisms from those churches. He announced almost $300,000 had been granted to 159 congregations for evangelism projects, exceeding the goal of 150 church grants for 2020.

He noted the team was involved in helping with Crossover events at the Southern Baptist Convention in Anaheim in June where 547 professions of faith were celebrated.

Francis Chung, leader of the Missions Initiatives Team, said he is “excited about the possibility” related to additional strategic partnerships.

With the summer being prime time for Feeding Those Who Feed Us migrant ministries, the team reported preliminary results for June which include 126 professions of faith from 30 projects conducted by 160 volunteers representing 20 churches. The ministry also reported distributing food, either through grocery bags or a drive-through food distribution, to 370 family units.

The Women’s Ministry Network continues to grow by engaging women throughout the state through a variety of meetings and connections.

The Church Planting Initiatives Team has met or is close to meeting goals for the year. The team, led by Ross Shepherd, established a goal of starting 10 new churches in 2022 and reported starting 27 through June. Another goal was to establish five new Hispanic church plants during the year and are nearing the benchmark having planted three to date.

One church plant, Sovereign Trinity Church in Victorville where Josiah Espinoza is pastor, reports 22 professions of faith. He said, “When we started, we started with 25 people. We are now at 75 on our roster. Praise the Lord. I know it’s not about quick growth, but steady plowing and reaping.”

Ralph Neighbour, leader of the Church Revitalization Initiatives Team, said his ministry group is continuing to move forward in meeting goals to serve CSBC churches in 2022. He noted 84 churches are engaged in Count the Cost through the first six months of 2022 with a goal of 90 churches being involved for the year.

The team is responsible for Bible study opportunities in CSBC congregations. Phil Herrington, pastor of Pathways Community Church in Santee and a Count the Cost champion, said, “After 29 years in one church, I’m convinced that the ministry of small groups is one of the most powerful tools for people engagement. An extensive survey of my own congregation found that preaching and worship style are initial drawing factors, but small groups, far and away, are what create long-term member retention.”

She also reported progress in engagement with churches and CSBC leaders through “This Week at The CSBC,” a weekly newsletter sent to more than 11,000 California Southern Baptists.

The staff engagement ended July 12 with a special time of worship led by local music leader Kristi Foss and featuring a message from Will Browning, chief church planting strategist for Los Angeles serving as the Send City Missionary for the North American Mission Board.

CSBC staff meets 10 times annually to report progress on goals and plan to meet the needs of churches.