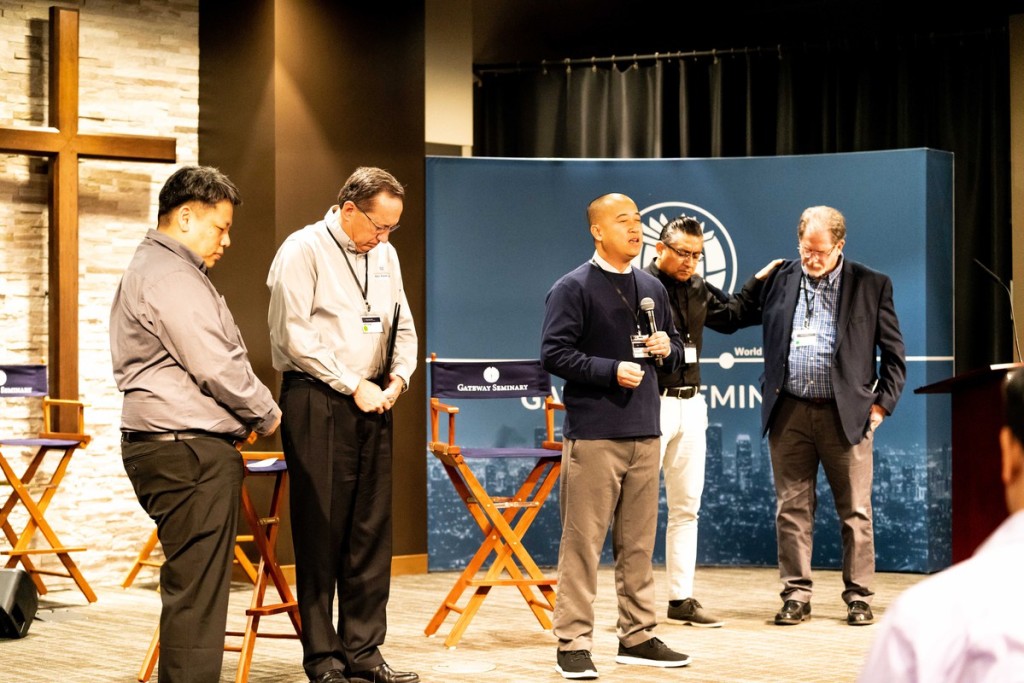 ONTARIO, CA—A dream for Gateway Seminary students to explore the possibility of career missions came true for Gerald Lee when California Southern Baptist Convention and two SBC entities signed an agreement to provide $100,000 over the next five years solely for that purpose.

Lee, connection specialist for the International Mission Board’s Asian Pacific Rim Peoples Affinity, said the partnership to fund seminarians travel “comes full circle for me” who now serves as a career missionary with IMB and whose journey began on a short-term missions trip as a Gateway student.

CSBC and IMB agreed to provide up to $100,000 ($50,000 each) over the next five years to support Gateway Seminary students through short-term mission trips to the Asia Pacific Rim region. CSBC and IMB are in the second year of a five-year partnership to mobilize California churches for missions through APAC.

As a struggling seminary student, Lee recalled hearing about and being interested in a mission trip to Asia, but was unable to afford the cost. “I remember going to church where I was working in youth ministry on Wednesday night and telling my pastor about the opportunity and my inability to go because of finances.”

Lee recounted his pastor telling him that “he would take care of it.” To Lee’s astonishment at church the following Sunday, he received an envelope “full of cash for me to use to go on the mission trip.”

It was on that mission trip that Lee committed his life to international missions among Asian peoples. Lee explained his plan was to return home to Hawaii to plant a church.

“I remember vividly being so overwhelmed while on that trip that I told the Lord I’d do whatever He wanted me to do.”

Lee said he has been praying to find a way to financially support seminary students to go on short-term trips because “Gateway is such and integral part of the work and ministry in California.”

This partnership, according to Lee, now makes that easier for students to be involved in missions.

Jeff Iorg, president of Gateway, said, “Short-term mission trips are prime opportunities for students to discover God’s calling. Our hope is that many Gateway students will answer God’s call to serve as overseas missionaries.”

Students at the Southern California based SBC seminary have opportunity to participate in summer mission trips through a program called Beyond Teams to examine their ministry calling while earning class credit.

“Seminarians exploring their call to missions will have the benefit of serving among engaged field workers that are invested in their [the students] sense of call,” said Lee. “CSBC, IMB and Gateway have provided the on-ramp to make that happen.”

This new partnership provides funds for as many as 20 students annually to serve on a Beyond Team with a travel stipend of up to $1,000 per trip to the Asia Pacific Rim region.

At Gateway’s annual mission conference on March 4, 2022, representatives from the three entities signed a “memorandum of understanding” that directs funds to offset growing travel costs for students. The signatories were Iorg; Lee; Pete Ramirez, CSBC associate executive director; Victor Chayasirisobhon, CSBC president; and Eddie Pate, director of Gateway’s Kim School of Global Missions. Chayasirisobhon prayed over the signing and asked God to bless the future work it will support.

“CSBC is committed to seeing people from California churches respond to the great commission,” Ramirez said.

“Gateway seminary students are the perfect candidates for such a task.”

Francis Chung, leader of the CSBC Missions Initiatives Team, said California Southern Baptists are integral to this partnership because “our Convention has more ethnic groups than any other state. We have the people with the right language skills and cultural sensitivity to immediately reach the lost for Christ around the world. There is no acclimation period or language study needed. These are ready-made missionaries that God has provided in California.”

He noted there are 2.2 billion lost people on APAC countries. “The workers are few,” he said. “This is one way for California Southern Baptists to be involved in possibly sending more workers to reach many in those countries for whom Christ died.”

He asked, “How else will students know whether they are called unless they go? Many missionaries affirmed their call on short-term trips. CSBC wants to remove any financial obstacles that may prevent a student from taking such a trip.”

Pate said, “This is an exciting partnership because it involves the California Southern Baptist Convention, the International Mission Board and Gateway Seminary. It is a great picture of what Southern Baptist great commission work looks like!”

Chung agreed by saying, “We are better together. This shows the power of the Southern Baptist Convention and how unity in purpose, mind, and heart can lead to revival.”

The partnership between the Seminary, the IMB and the CSBC also extended into Gateway’s annual missions conference. Along with plenary speaker Bryant Wright, president of Send Relief, personnel from CSBC, Gateway, and IMB participated in the event. Attendees learned about CSBC ministries including Feeding Those Who Feed Us (migrant ministry) and Disaster Relief. They also learned about California Woman’s Missionary Union and its ministries. The second day of the conference was a one-day IMB Missions College.