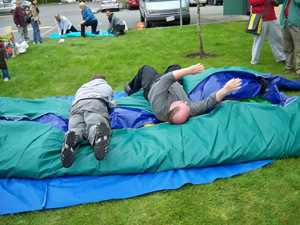 Such a unit – a “block party trailer,” in evangelical parlance – is a crowd magnet, kid-pleaser and tone-setter for conversations that may very well make their way around to the topic of Jesus. With it, Canadian church members and church planters hope to introduce Christ, in a real and lasting way, to the vastly under-reached peoples of Vancouver, British Columbia.

Through the California Mission Offering, CSBC has purchased a block party trailer for each association in the state. Now that outreach tool is extended to Canada.

At the end of April, Randy McWhorter, leader of the CSBC healthy church group, drove the trailer to Vancouver, spending six hours at the border with customs officials.

“They needed to know not just all the contents, but where everything was made, because there’s a different tariff for each country of origin,” he explained. “We had to pay a broker to import the goods for us. It was quite an ordeal.”

After delivering the trailer into the care of Towers Baptist Church in Richmond, British Columbia, McWhorter led an association-sponsored training session on how to utilize it.

Said Ray Woodard, NAMB missionary for church planting in Vancouver: “We were really pleased with the turnout – we had 35 people from 22 churches, and quite the ethnic mix of language churches: Burmese, Chinese, Korean, Mien – those are ethnic Chinese in northern Laos – and Hispanic.

“Randy set up the equipment in the parking lot and showed us how to use everything. He did a super job of giving them ideas and options of how to utilize the trailer. It really helped reconnect some of our churches to focus on evangelism.”

Several congregations in the association have already reserved the trailer for outreach events, including some planning to tie into city- or community-sponsored events.

“One church is providing the trailer as part of a community fair,” Woodard explained. “Another is helping a charity benefit. One church planter is going to use it for a block party in his cul-de-sac, to meet neighbors. Another is sponsoring a year-end party for a sports league that plays all summer at the park next to the church.”

Thanks mostly to the work of a Mission Service Corps couple, the association has assembled various elements of a block party trailer – but piecemeal. Now, with the leadership of Rob Zinn, pastor of Immanuel Baptist Church in Highland who is on an advisory panel for “Send: Vancouver,” and the generosity of California Southern Baptists, the association has all the pieces for a party in one mobile unit.

The church-to-population ratio in British Columbia is among the lowest in all of North America – 1:100,000.

“The ratio in California is one church to approximately every 19,000 people,” McWhorter noted. “Canada only has 33 million people total, while California has 38 million in a much smaller area. So we’re dealing with some similar numbers here.”

Woodard added, “We are really looking forward to seeing how God uses this trailer over the summer and beyond. This has multiplied everything we’ve got.”