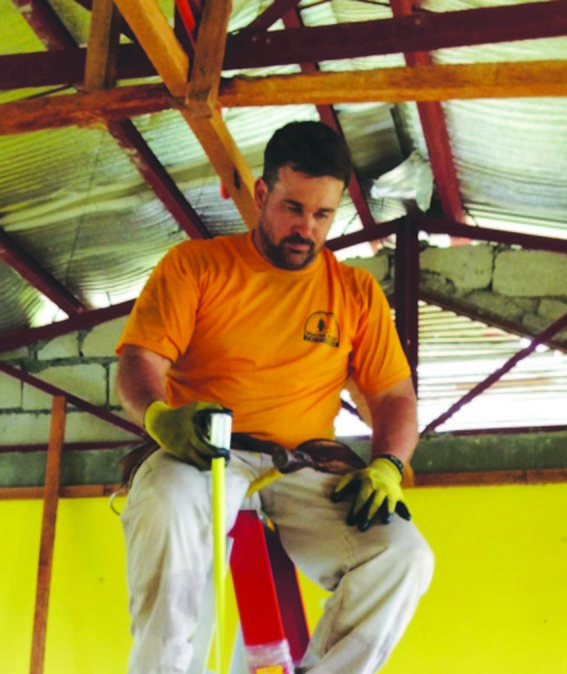 As wildfires continue to sweep the state, CSBDRM has worked diligently on the front lines of relief efforts — often going above and beyond the call of duty.

Kendrick Neal, associate pastor of First Baptist Church of Mira Mesa in San Diego, is a team leader or “Blue Cap” with CSBDRM. He became involved in the ministry when he moved to California three years ago.

“We go in after a fire and do what we call an ‘ash-out,’” Neal explained. “We will clean the property and give the residents a clean foundation to restart building on.”

Part of CSBDRM’s procedure involves sifting damaged areas for valuables that might be salvaged.

A recent project took Neal’s team to the San Diego area to clean up seven pieces of land — a mixture of homes and farms — that had been decimated by wildfires.

While speaking with one retired resident, Neal discovered that his son had been a sergeant in the army, but was killed in 2004 while serving in Iraq.

“The man told me he would love to have his son’s Bronze Star and Purple Heart that were lost in the fire,” Neal said.

Neal happened to have a sifter in the back of his truck, so he and the team’s chaplain, Jerry Shirley, immediately set to work searching for the lost medals.

They quickly found one service medal in the ash, though it had been badly burned. The Purple Heart and Bronze Star were more difficult to locate, but Neal and his team refused to give up.

Neal is a veteran, having served more than 12 years in the Marine Corps, so finding the medals was especially important to him.

“There is a brotherhood there,” Neal said.

Unable to initially locate the Bronze Star and Purple Heart, Neal returned to the site with another cleanup team, led by CSBDRM Blue Cap Ken Clark, to continue the search. After several hours of sifting through the ash they located the Bronze Star, but saw that it had been badly charred as well.

When Neal learned that the man’s attempts to get the medals replaced had been unsuccessful, he decided to step in.

“Being in Mira Mesa, we’re about two miles away from the Marine Corps base, and we have several people in our church who are active in the military,” Neal said. “This one Marine was able to contact the headquarters and get me the medals and award citations, as well as a flag that was flown over the base in honor of the gentleman’s son.”

On their final day of work on a project, it is customary for the team to present a Bible to the homeowner.

“But this day,” Neal said, “we were able to present a Bible, along with the medals and flag.”

The man immediately broke down in tears of surprise and gratitude.

“We were able to pray as a group over him and it was just a really neat time,” Neal said.

According to Neal, moments like those are what keep him passionate about DR work.

“The biggest reward is having the opportunity to share the hope of Jesus with people who are hopeless.” Neal said. “Just being able to remove ash or get the mud out of their house, and seeing the hope that provides. It has been great.”