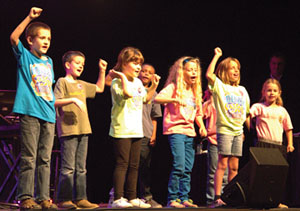 FRESNO – Messengers to the 2014 California Southern Baptist Convention annual meeting weighed in on several issues including motions regarding church affiliation, a 2015 proposed budget and Cooperative Program objective, and amendments to the CSBC Constitution and Bylaws.

During the 74th annual meeting, held at Clovis Hills Community Church in Clovis Oct. 21-22, a number of motions related to church affiliation and the process for churches being admitted to the Convention were introduced.

Mike Cook, a messenger from Iglesia Bautista Familia de Dios in Lompoc, moved that CSBC immediately rescind the affiliation of Central Coast Church, Inc. (CCC) in Orcutt because of non-SBC beliefs, not being in agreement with “The Baptist Faith & Message” 2000 and God’s revealed Word.

J.T. Reed, pastor of First Baptist Church in Fair Oaks, moved to refer the motion to the CSBC Executive Board to take action and report back to the Convention. The vote to refer was too close to call by raised ballots, so a written vote was taken and the motion failed by 160, or 50.6 percent, to 156, 49.4 percent.

During discussion of the motion, accusations arose of deception on the part of a new church start that merged with an existing CSBC congregation to form CCC. Mike Stewart, a messenger from Foothill Church in Los Altos and director of missions for Central Coast Baptist Association, told the body the association had approached the Executive Board about taking action, but the Board refused.

Montia Setzler, pastor of Magnolia Church in Riverside and chairman of the Board, told messengers the Board did not act “because we didn’t hear both sides of the story” – only from the association. He added that “to make this decision at this convention without due process creates a very dangerous precedent for us.”

Amid the discussion, a challenge to seat messengers from CCC was submitted. In a split decision, the CSBC credentials committee recommended messengers from the church be seated. Messengers voted in favor of the recommendation.

Another CCC-related motion, introduced by Steve Zahare, pastor of Park Victoria Baptist Church in Milpitas, calls for a special meeting before Jan. 1, 2015 of the Board’s executive committee to discuss, make a decision and report as to whether Central Coast Church should be removed from CSBC. The motion passed.

A CSBC Bylaws amendment related to the affiliation process was made by Stewart and calls for the committee on resolutions, credentials and membership “to confer to make decisions regarding membership status of churches wishing to affiliate with the Convention, recommending actions to the Executive Board or Convention.” The amendment strikes the words “as needed:” “Throughout the year the committee shall confer, as needed, to make decisions … .” The amendment was approved.

Stewart also made a motion calling on the resolutions, credentials and membership committee to “propose a clear and open review process so that all members of CSBC cooperating churches may review online pending affiliation applications.” The motion also calls for the committee to “provide a clear and open process to hear and review any concerns from CSBC churches, associations and SBC partners.”

The motion, which passed, also calls for the proposed affiliation process to be presented to messengers at the 2015 annual meeting.

Background information for the budget explains the increase is primarily from general reserve funds of almost $325,000 to provide for 100 percent of resources offered by the North American Mission Board.

California Southern Baptist Convention does not include “shared or preferred” items in its budget. If the $6.8 million in CP gifts is realized, the SBC Executive Committee will receive $2,278,000, or 33.5 percent, a half-percent increase over the 2014 allocation. CSBC is on track to increase by one-half percent each year until the SBC portion is 35 percent. At that time, the percentage will be reevaluated.

Alexander and Bennett received the most votes, leading to a runoff in which Bennett won with 193, or 63.5 percent, of votes cast compared to Alexander’s 110, or 36.5 percent. Alexander was later nominated by Bennett to serve as vice president and was elected by acclamation. Hector Jimenez, a member of Valley Baptist Church in Bakersfield, was recommended by the committee on convention operations as music director and also was elected by acclamation.

A constitutional amendment that would have given an equal number of messengers to all CSBC congregations, regardless of size or Cooperative Program participation, failed. The amendment was supported by 158, or 50.6 percent, of the 312 ballots cast, but fell short of the required two-thirds. The amendment was proposed in 2013 by David Wilson, pastor of Grant Avenue Baptist Church in Redondo Beach, to allow 10 messengers per church.

Messengers approved a bylaw amendment from the Executive Board to reduce the size of the California Baptist Foundation board of directors from 21 to 16. When asked how the reduction would be realized, Philip W. Kell, CBF president, said it would be achieved through attrition.

Teresa Watts, worship minister at Woodward Park Baptist Church in Fresno, led worship with a team of musicians from the church.

The California Baptist Historical Society presented its annual Heritage Award to Glen Paden, who retired in 1997 as president of California Baptist Foundation; prior to that he had served as pastor of several California churches. His wife, Alene, and several family members joined him for the presentation.

Events including the Pastors’ Conference, California Women’s Meeting, Fellowship of Church Musicians, Hispanic and Chinese gatherings, and the On Mission Celebration were held prior to the annual meeting at various churches in Fresno and Clovis.

Messengers approved a resolution expressing gratitude to the city of Clovis, Mid-Valley Southern Baptist Association and the host church.

This year’s annual meeting registered 429 messengers and 146 guests from the more than 2,200 CSBC congregations that comprise about a half-million members.

The 2015 annual meeting will be held at Valley Baptist Church in Bakersfield Oct. 27-28, and will celebrate the Convention’s 75th anniversary. CSBC was started in Shafter (near Bakersfield) in 1940, with 13 churches.