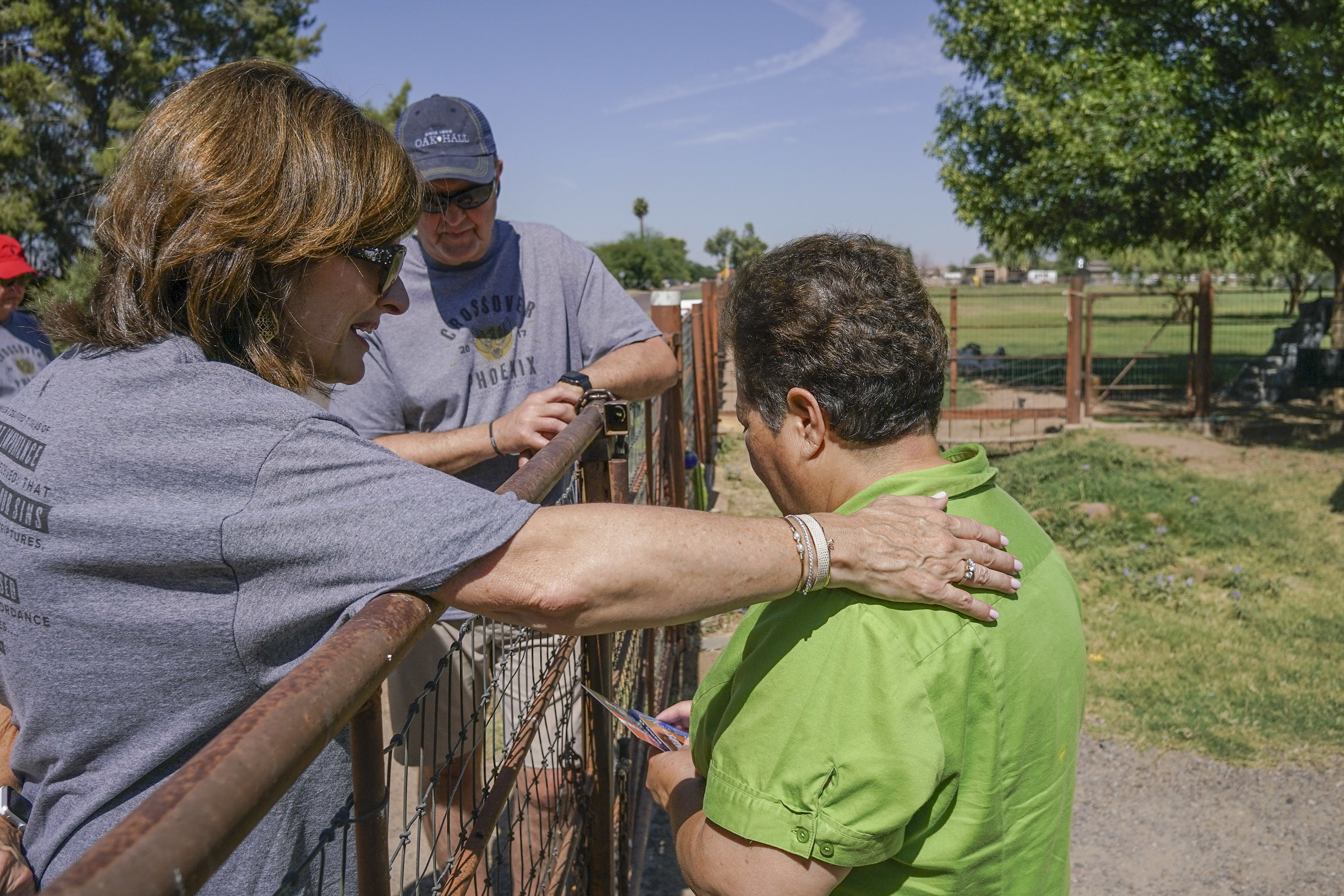 PHOENIX (BP) — It started Friday, June 9 — the rumblings of an awakening. More than 700 voices worshiped at North Phoenix Baptist Church, kicking off the weekend’s Crossover Arizona and Harvest America events.

By the end of that evening, Harvest reported 2,904 professions of faith in Christ, with another 494 indicating decisions online.

The events were held in conjunction with this year’s Southern Baptist Convention annual meeting in Phoenix.

“Welcome to Crossover,” said Jason Powell, pastor of Harvest Christian Fellowship in Riverside, during Crossover’s Friday evening gathering. “This is for you to learn tips and tactics to tell someone else about Jesus. While we’re excited about the opportunity for 35,000 people to hear the gospel at the crusade, it’s very important we learn how to share and get out there every day.”

Powell was one of three key speakers at Crossover’s opening night of worship, along with Levi Lusko, pastor of Fresh Life Church in Montana and Laurie, senior pastor of Harvest Christian Fellowship. The speakers shared testimonies, techniques and training for one-on-one evangelism participants could use to deliver the gospel simply and powerfully.

Homeowners Ryan and Alexandra Dubia worked alongside volunteers sweating in unison in the 98-degree heat.

“Our house was a blessing,” Dubia said. “It gave me and my wife Alex a break when we got our lives together and stopped using drugs. We’ve been clean for 22 months. This house, and the opportunity to have it maintained by volunteers, is a relief for our soon-to-be family of four.”

But the day wasn’t over for Crossover participants. As the sun set, the streets of Phoenix, Glendale, Scottsdale and Ave Mesa filled with groups sharing the gospel during the “Tell Someone” evangelism portion of Crossover.

Steve Gaines, president of the SBC and pastor of Bellevue Baptist Church in Cordova, TN, served alongside his wife Donna and Southwestern Baptist Theological Seminary students and alumni Saturday night in Glendale. Seminary students had hit the streets earlier in the week to begin their annual evangelism effort in conjunction with Crossover and the SBC annual meeting.

“With our group, we visited over 1,000 homes,” Gaines said. “We had well over 200 gospel conversations and were out for about three to four hours. We had a great time!”

Frank Page, a past president of the SBC and now president and CEO of the SBC Executive Committee, also participated in door-to-door evangelism Saturday with First Southern Baptist Church in Sahuaro Ranch Park and Southwestern students.

“I was delighted to go with a group of students from Southwestern Seminary, my alma mater, in sharing the gospel,” Page said. “I did not get to lead anyone to Christ, but I did have several great gospel conversations. I have participated in Crossover for many years and love the privilege.”

The weekend’s events came to a crescendo Sunday night as approximately 38,000 gathered to hear the Good News of Jesus at the University of Phoenix Stadium in Glendale. Another 3,000 host sites joined the event online.

“The goal of Harvest America is to impact a nation,” Lusko said as he introduced the Sunday night event. “Everyone wants hope and is longing to have the hole inside them filled up. Everyone is clutching for meaning, and we have the answer!”

The crusade started with prayer for the nation, then participants experienced a night of worship with musical artists NEEDTOBREATHE, Trip Lee, MercyMe, Jordin Sparks, Phil Wickham and Brennley Brown, and heard a gospel presentation from Laurie.

Many had been invited to the crusade by friends, neighbors, coworkers, family or even strangers.

“I came to the crusade because my friend started asking me about Jesus and Harvest America was the perfect opportunity to have her hear the gospel,” Tammi Gauthier, an Arizona native, said. “The friend I brought was my daughter’s nanny. We fell out of touch for awhile, then, out of nowhere this year, she started reaching out and asking about Jesus.

“I’d been to a few crusades before but nothing this big. I was so happy to bring her and have her be completely immersed in worship and the Word.”

In his message, Laurie shared about the anxieties and fears most Americans live with. In Arizona, the number of suicides is significantly higher than homicides, resulting in 810 deaths annually, he noted.

“We’re living in a crazy world right now,” Laurie said. “Our nation is lost in every state including Arizona. The threat of terrorism is real.

“People are scared, worried, in anxiety. But let’s have theology without apology. People are hungry for that; they’re hungry to have an honest and hopeful conversation.

“The last thing that God wants is any man or woman created in His own image to go to Hell. Heaven is His place for all forgiven people and all people can be forgiven at any time if they believe and receive Him into their lives.

“That’s the message we aimed to share during Crossover Arizona and at Harvest America — a message of hope to the nation.”

Laurie concluded by inviting people to the stadium floor if they wanted to begin a relationship with Christ.

Plans are underway for a similar partnership next year as the SBC meets in Dallas.