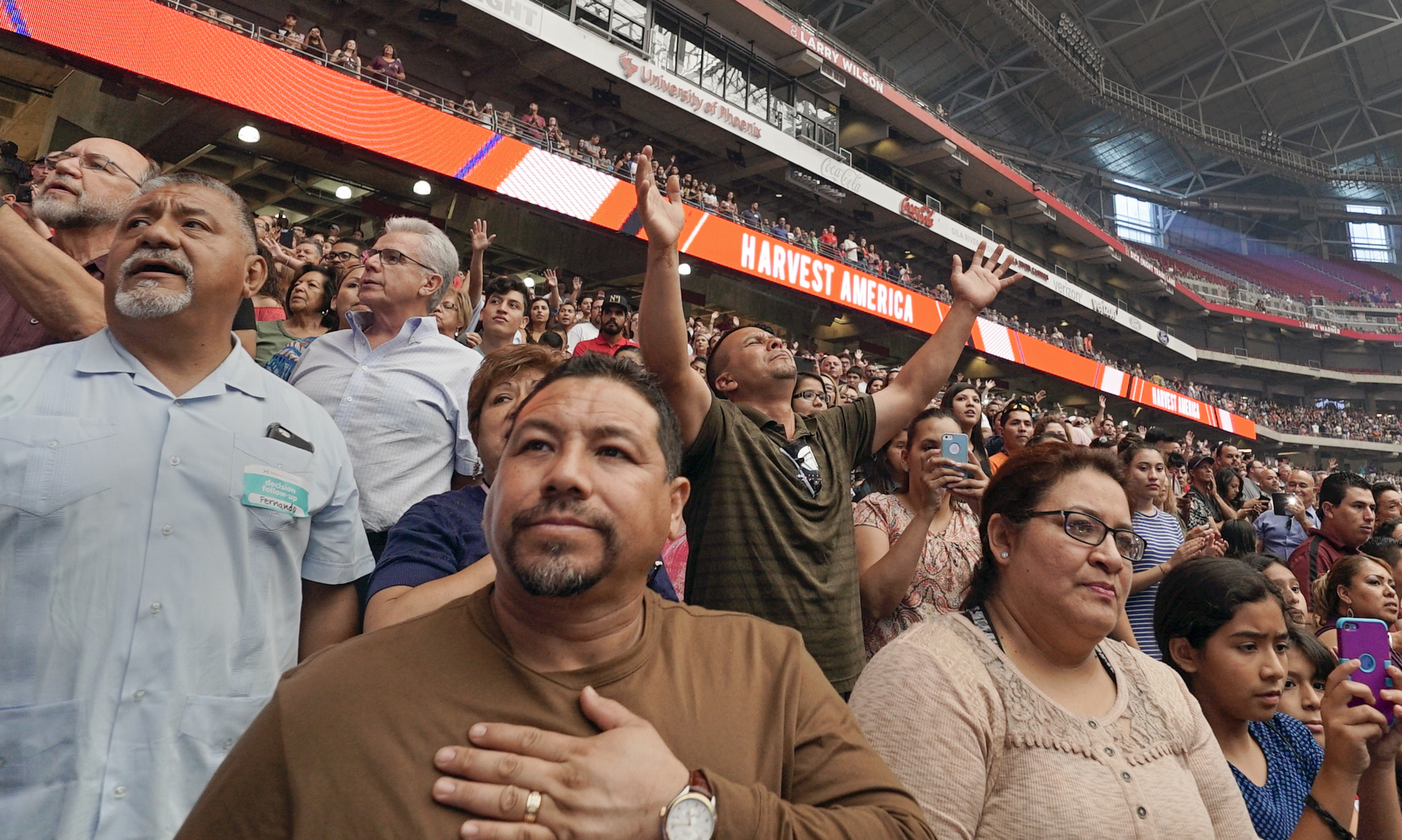 DALLAS (BP) — A year after nearly 3,000 people came to faith in Christ during Crossover efforts in Phoenix, Southern Baptists once again are partnering with Harvest America for an evangelistic crusade the Sunday before the Southern Baptist Convention convenes in Dallas this June.

The crusade, featuring California pastor Greg Laurie, will start at 6 p.m. June 10 at AT&T Stadium, home of the NFL’s Dallas Cowboys. Featured musicians will be Chris Tomlin, Switchfoot, Crowder and Phil Wickham. A pre-event concert with Trip Lee, Tedashii and KB will start at 5:30 p.m. Like last year, Harvest America will simulcast the event at locations throughout the country.

For three decades Southern Baptists from across the country have gathered the weekend before the SBC annual meeting to engage the host city with the Gospel of Jesus Christ. A number of churches in the Dallas-Fort Worth area, meanwhile, are planning door-to-door canvassing, block parties and compassion ministries, several in tandem with students from SBC seminaries, while a Crossover evangelistic initiative by Hispanic Baptists also is planned.

“One of the most incredible things we do as Southern Baptists is embrace the city where the Southern Baptist Convention annual meeting will be held,” said Jack Graham, a former SBC president and the pastor of Prestonwood Baptist Church in Plano, Texas. “Crossover provides a great opportunity for Baptists to be the hands and feet of Christ in the days leading up to the SBC meeting.”

Graham, whose church has partnered with Harvest America for past events, said North Texas is a growing mission field.

“This is amazing synergy for Southern Baptists to go door-to-door inviting people to Harvest America, especially in a burgeoning region that continues to see more and more new residents. Prestonwood is all in as we seek to make Harvest America the greatest event ever held at AT&T Stadium — where lives could be changed forever for the glory of God.”

The North American Mission Board will partner with Harvest America, the Southern Baptists of Texas Convention, the Baptist General Convention of Texas, local Baptist associations and hundreds of local churches to engage North Texas through the crusade and other Crossover activities.

Along with the crusade, evangelism training will take place at several different “launch campuses” in the area. These campuses will provide outreach opportunities on Saturday, June 9. To see a list of these campuses, visit www.namb.net/crossover.

Joel Southerland, NAMB’s executive director of evangelism, noted that the Harvest America crusade “brings together hundreds of area churches, and we could see thousands of people come to faith in Christ. As Southern Baptists, it’s a great opportunity to be a part of what we believe will be a great move of God in the region.”

Local churches already have started mobilizing to be a part of the effort. A prayer event at Mountain Creek Church’s Prayer Mountain will take place May 14 at 6:30 p.m. Several pre-event rallies also are scheduled the second week of May.

John Collins, executive director of Harvest Ministries, believes the crusade — and the lead-up evangelism training and activities — will provide Southern Baptist churches a great opportunity to prepare not only to engage North Texas with the Gospel but their own local communities as well.

Local churches, as well as churches that send people to the event from across the country, have a variety of opportunities to participate in the event, including as decision follow-up workers, ushers and prayer room volunteers, Collins said.

“There’s nothing that energizes a church more than having people in that church be a part of leading others to Christ,” he said. “Whether it’s just handing out an invitation to someone on the street or being a follow-up counselor and praying the sinner’s prayer with someone who has just responded to receive Christ, it gives people an opportunity to put feet to their faith. What we hear from churches who send people is that those people generally come back more passionate and more fired up about reaching the lost.”

Such evangelistic events, Collins said, often can change the focus of Christians and churches to help them become more passionate about getting the gospel out.

“Proclamation evangelism, unfortunately, is seen by some to be a relic of the past, but we believe, as the Scriptures say, that it’s through ‘the foolishness of the message preached that God has chosen to save those who would believe,'” Collins said. “Our hope is that even when the event is over, the passion for evangelism remains and grows.”

The National Hispanic Fellowship, also in conjunction with the SBC annual meeting, will aid seven Hispanic churches in Dallas in an evangelistic crusade in their communities, June 4-10, working in tandem with Hispanic volunteers from across the country and the International Commission ministry.

The campaign will culminate with a Night of Victory on Sunday, June 10, “expecting hundreds of new converts and believers reconciled with God,” said Augusto Valverde, president of Hispanic fellowship and lead pastor of Iglesia Bautista Un Nuevo Amanecer in Miami.

For information about the Hispanic outreach, contact Eloy Rodríguez, pastor of Idlewild Baptist Church Español in Tampa, Fla., at 407-927-1359.

For more about Crossover and the Harvest Crusade, including how to volunteer, how to participate in pre-events and how to simulcast the event from a church, visit www.namb.net/crossover.