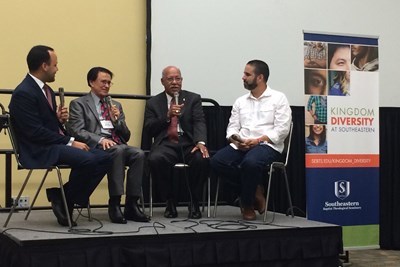 CP a timely lifeline and calling for Fermín Whittaker

MENIFEE, Calif. (BP) — Fermín Whittaker was a lonely seminary student in Canada, far from his home in Panama, when God used the Cooperative Program to hook his heart and set in motion a lifetime of support for unified Southern Baptist missions and ministry.

Whittaker, executive director emeritus of the California Southern Baptist Convention, told Baptist Press he was saved at age 12 in a Baptist church in Panama, discipled by a Southern Baptist missionary and later made his way to Canada to enroll at a Baptist seminary.

On his first Christmas Eve there, Whittaker was sitting in a room with a few other international students. Everyone else

had gone home to their families. “A lady gave us hot chocolate,” he recalled.

“We were so lonely, and we started to cry,” Whittaker said. “My parents didn’t have a phone. I couldn’t call them. My dad made 14 cents an hour…. We were from poverty. All of us were.”

The words “Southern Baptist” came to mind, harkening back to the missionary in Panama who helped nurture his new faith.

“So I opened the telephone directory to find a Southern Baptist church. There was a listing that said, ‘Southern Baptist liaison to Canada.’ I didn’t know how to spell the word liaison, but I knew the words Southern Baptist,” Whittaker said. “I called the number from the school dorm, and the guy answered and said, ‘This is W. Bertram King.’ I said, ‘Dr. King, I’m Fermín Whittaker, a Southern Baptist student from Panama. I have nowhere to spend Christmas.’ He said, ‘I’ll be there in 20 minutes, son.'”

King and his wife Edith made their way in a Toronto snowstorm to knock on Whittaker’s door. They told him to get his suitcase because he was going home with them for Christmas — and for subsequent occasions when the school would be closed, for that matter.

The Kings, Whittaker said, adopted him for those four years he was in Canada learning to preach the Gospel. They arranged for him to serve as a summer missionary in New York and California, and they were instrumental in getting him to California Baptist College (now University), where he earned an undergraduate degree. For more than 20 years, the Kings sent Whittaker an annual Christmas card, he said. They built on a foundation laid in his life through Southern Baptist mission work in Central America.

As he learned more about cooperative Southern Baptist work during a pastorate at Primera Iglesia Bautista del Sur in Pico Rivera, Calif., Whittaker led his church to tithe 10 percent. They gave, starting in 1964, 7 percent through the Cooperative Program for national and international missions and ministries and 3 percent to the local Baptist association.

Later, in his roles at the Home Mission Board (now North American Mission Board) and for 22 years as executive director of the California Southern Baptist Convention, Whittaker continued to champion the Cooperative Program, knowing all along what it had done for him.

“The men and women whose shoulders I had to stand on to get to where I am today — trust me, there were hundreds, of many cultures, by the way, that said, ‘Let us see how we can help you,'” Whittaker told BP. “That’s when God began to work in my life and that’s how He continues to work in my life. The linkage is powerful.”

As executive director of the CSBC, Whittaker led the convention to increase the portion of Cooperative Program gifts forwarded from CSBC churches by nearly 5 percentage points of the state’s total CP gifts — from 28.85 percent in 1995 to 33.6 percent in 2015, despite the deep impact of the global economic crisis that impacted the state’s churches and their members, according to a resolution of appreciation from the SBC Executive Committee acknowledging Whittaker’s retirement this year.

Whittaker acknowledged that too many Southern Baptist churches are not taking advantage of the multiplying powers of the Cooperative Program, but his approach, he said, is not to chastise them.

“Those are choices that they make. I go there to show them what God has done in their lives, and you’d be amazed at how many have said, ‘Pastor, we never understood,'” Whittaker said.

Milton Steck, who has known Whittaker since college and was pastor of Trinity Baptist Church in Vacaville, Calif., for 43 years, told BP Whittaker demonstrated consistent encouragement toward CP giving.