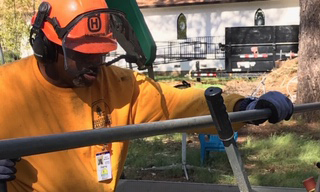 FRESNO — The world loves to shine a spotlight on power couples, and Harry and Teresa McDaniel certainly shine bright. The McDaniels have been active in volunteer work since their retirement as corrections officers, and have worked with ministries such as Disaster Relief, Faith Riders, Good News In Action and various efforts at Valley Baptist Church in Bakersfield, where they are members.

The couple has worked together and separately over the years. Through it all they have supported each other in what God called them to, and been beacons of encouragement to one another.

Teresa has a long resume of work with various ministry organizations. She is involved with Disaster Relief in both California and Texas, has worked in evangelism through Good News In Action, has been a summer volunteer at Jenness Park Christian Camp and serves at Valley.

“We got involved with Disaster Relief at Valley Baptist Church back in 2012 when we retired, as a way to give back,” Teresa said. “There was a callout from Texas and I responded. The training took place in Richmond, and then I went to Texas.

“Most recently I went to Texas with Disaster Relief back in May. Once a year Disaster Relief in Texas feeds the staff at prisons to show appreciation for law enforcement and to give back to those who sacrifice so much for us.”

McDaniel has persevered through all her volunteer efforts with a servant’s heart, and has been receptive to the lessons and work the Lord has had for her.

“There’s no one particular favorite (ministry), but as long as I’ve been in a position to serve, that’s my favorite. Doesn’t matter how small it is, as long as it allows me to have a servant’s heart,” she said.

“I have learned that it is okay to say no. We must follow what God has for us, but we aren’t supposed to be too busy that we forget Whom we serve.”

Although the McDaniels have not been able to work in Disaster Relief together, they have done evangelism and Faith Riders together in addition to serving at church.

“Unfortunately, we never have had the same schedule that allowed us to do Disaster Relief together,” Teresa said. “It is pretty cool, though, that my husband and I get to be roommates when we’re out serving! We get to (help) each other and encourage each other. He inspires me every day.”

Harry also is deeply involved in volunteer work and has a resume to match his wife’s.

In addition to his work with Disaster Relief, McDaniel also has gone on two international mission trips, worked with Faith Riders and served in the media ministry at Valley.

H went to Africa in 2005 on a two-week mission as part of a 20-person team. In the two weeks the team saw some 7,000 professions of faith in Christ. Harry went on a mission trip to China in 2010 under the auspices of teaching English as a Second Language. After classes, the missionaries would meet students at the mall to avoid the constant government surveillance that followed them everywhere.

Harry also became involved with Faith Riders Motorcycle Ministry through Valley, which led to his involvement in Bill Glass Behind the Walls prison ministry. He has served at events in both adult prisons and juvenile facilities, where he shares the gospel with and volunteers to serve inmates.

“The ministry makes a difference in the facility and the inmates’ lives,” Harry said. “Violence calmed down in the prisons we were at because they wanted us to be there so they were on their best behavior.”

The McDaniels have been steadfast in the Lord and serving Him, each other and others.

“I try to tell people that God has a plan for their life. They have to try and figure out the plan for them because I know the plan for my life is different than Teresa’s life,” Harry explained. “We must be obedient to what the Lord calls us to do. That is how I show God I love Him.

“He gives us gifts and abilities to use for His purpose and gives opportunities to use them.”