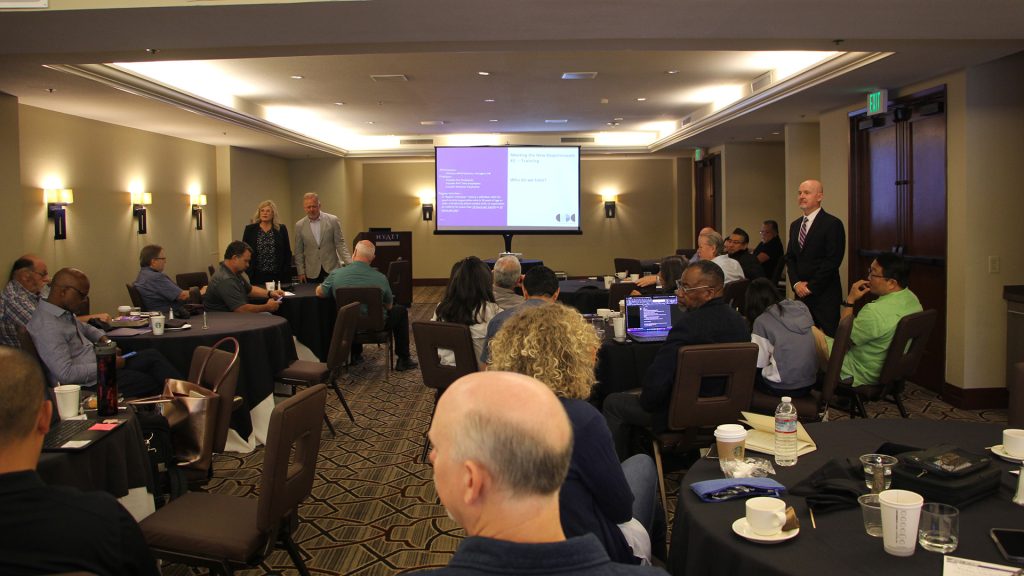 WESTLAKE VILLAGE–California Southern Baptist leaders from across the state gathered July 17-20 for what most understood to be a traditional Count the Cost training. It proved to be much more.

Count the Cost is a church assessment initiative introduced by former CSBC Executive Director, Dr. Bill Agee to help churches measure church health and battle stagnancy or closure. Chris Codrington, The Greater LA and Coastal Association of Churches Co-DOM and Count the Cost Champion said, “With Dr. Agee the foundation was laid. Now we can start building.” He went on to share that “we don’t need to feel rushed by the role God has assigned to each leader because God has no time limit.”

Dr. Ralph Neighbour III, CSBC Church Revitalization Team leader, has been developing a select group of Count the Cost Champions, training them to not only administer the assessment tool, but his revitalization team is also training the champions to become expert coaches, actively walking participating church leaders through their own Count the Cost goals.

Count the Cost champions are strategically mobilized throughout California. Champions have thus far gone through two intensive trainings. Deployment to the task has proven beneficial, not only for the churches, but for the champions.

Mark Standridge, a Count the Cost Champion, and pastor at Placer Heights Baptist Church in Placerville, said, “The follow up is a real encouragement, especially considering these last couple of years. Pastors are more open to say, ‘I need someone to pray with me.’ It means more when they know someone understands what’s going on from month to month. I can ask specific questions like, ‘how is it going with those two new visitors? Or how did that conversation with your deacon go?’”

The meeting dove deeper than any training to date. CSBC staff were invited to make presentations giving champions a greater understanding of the resources available to California churches.

Francis Chung, CSBC Missions Initiative Team leader, shared some exciting missions opportunities for 2023. He encouraged, “when you reach California, you reach the world. CSBC is working with every ethnic group and every demographic to reach the lost in California.”

Cathie Smith, CSBC Women’s Ministry director, reminded leaders that a healthy women’s ministry has a ripple effect of good for both their husbands and the kingdom “Our vision is to reach the world together; men and women, side-by-side,” she said.

The most surprising element of the training was a listening session, allowing attendees to openly share California church leaders’ thoughts and concerns. Participants were divided into small groups and asked probing questions for open discussion. Questions such as “what is the Spirit telling you about your church right now?” and “what should CSBC not be focusing on?” were posed. Each group reported back and CSBC staff took note.

By the end of the listening session, Codrington shared, “I thought we were just coming for Count the Cost. Now, I realize this is very relevant. As a leader of a dynamic association, the vision casting in this meeting is very important to me, especially as it relates to diversity.”

Newly elected Executive Director Pete Ramirez also fielded questions from the crowd. Questions ranged from, “Do you ever have a bad hair day?” to “What is your vision for the next five years?” Ramirez freely shared his heart, focusing on the formation of a collective vision. He made certain to explain that CSBC is more than the staff in Fresno. CSBC is a Convention of churches and entities working toward a common goal -reaching the lost in California. He emphasized that “we can be more effective when we understand our roles. Sometimes we have to lead, and sometimes we are called to be the best partner.”

Gil De La Rosa, DOM at Gold Coast Association noted, “Pete’s transparency, genuineness, and authenticity matters especially now, in light of the sexual abuse allegations scandal. Also, there is a disconnect that younger pastors have with the Convention, but Pete is so approachable. I’m a raving fan of this meeting.”

Bryon Barmer, another Count the Cost Champion and pastor at Bright Hope Community Church in San Diego, said, “it is vitally important that pastors in CSBC understand the change at the top. What can we anticipate moving forward? With Pete and Victor (Chayasirisobhon, CSBC President), we see something unique…two minorities giving key leadership, reflecting the constituency. I thought this meeting was a regular Count the Cost training, but it turned out to be completely different.

Guests from NAMB, ChurchWest and Church HR Network were also invited to give presentations to the champions. When asked about the newly reignited relationship between NAMB and CSBC, Will Browning from SEND LA noted, “Observing the way people are engaging with this training makes it evident that there is a greater hunger than obstacle for partnership and progress.” In his presentation, Browning shared that according to the numbers coming out of NAMB, “we may be experiencing the greatest church planting movement since the founding of our country, and this is all happening on your watch.” Browning further went on to explain that genuine planting efforts are already underway in Watts, Inglewood, Compton and Hawthorne, well-known, SoCal regions in need of the Gospel.

The training concluded with the new CA legislation, AB 506 issue impacting all churches in California. Leslie DeMattia, Founder of Church HR Network and child safety advocate, reminded attendees that “1 in 4 girls and 1 in 6 boys are molested before they turn 18. If churches follow these guidelines, they are in a much better position if they find themselves in court.”

Bob Brockman, lawyer and partner at Brockman, Quayle, and Bennett, urged attendees that “the laws surrounding AB 506 are already in effect as of January 1 and is codifying a standard of care.” By taking care to get your church under compliance with AB 506, “you are leaving a solid legacy for the church that goes on after you.”

Charlie Cutler, President of ChurchWest Insurance Services, expressed that it’s really challenging for ministries to find good information that ministry leaders can take and implement at the church. The information provided at csbc.com/ab506 is the best available. Many organizations are misinformed, selling an alternative that doesn’t meet the state guidelines or making it more complicated. He encouraged every ministry to get the free model policy, guide to background checks, and guide to training from csbc.com/ab506.  It is authoritative, accurate, and actionable, and for cooperating CSBC Churches, it is free!

Today, resources coming out of these agencies in relation to AB 506 are only in English. However, they are working on developing Spanish materials and researching opportunities to create resources in Korean.

Due to the working partnership between CSBC, ChurchWest, ChurchHRNetwork, and BQB, an abundance of free resources are available at csbc.com/ab506 for churches currently participating in cooperative program giving. Churches who, at this time, do not support CP can reach out to ChurchHRNetwork to subscribe on their own.

When asked about the value of this Count the Cost training, Kendrick Neal, Count the Cost Champion and pastor of Calvary Church West Hills said, “It’s great to be fellowshipping with other pastors and even more so to know that the state convention is actively looking to hear the heart of California pastors. Personally, I’m encouraged to see what is happening at CSBC as it moves forward.”