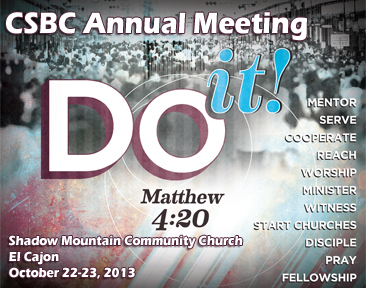 Messengers to the 2013 annual meeting of California Southern Baptist Convention will celebrate the ministry of churches in reaching California for Christ, Oct. 22-23 in El Cajon.

2013 Annual Meeting Theme
Do It!” is the theme of the two-day meeting set for Shadow Mountain Community Church. Paul Rochford, associate pastor of Barabbas Road Church in San Diego, said the theme, based on Matthew 4:20, was selected because “it shows action, but is not limited to one particular action. The theme has multiple ramifications in relation to the church and its ministries, from preaching the Word to caring for your neighbor.”

He added the theme would give speakers and presenters the “freedom to address whatever God has put on their hearts.”

Tuesday Evening features
Along with the theme, the Tuesday evening session will celebrate how churches “Do It!” through ministry, cooperative giving and church planting. That evening will feature the choir and orchestra from California Baptist University and special music by Marshall Hall, a recording artist and former member of the Gaither Vocal Band who is worship leader at Shadow Mountain. The night will be capped by keynote speaker Mark Dever, senior pastor of Capitol Hill Baptist Church in Washington, DC.

Tuesday evening is a special night of inspiration that will be a time of “celebration of being Christian and the task set before us,” Rochford said. “The culture in many ways is beating us up, but we wanted to emphasize that we won’t retreat, because the task isn’t over.”

He noted the evening will feature “positive and encouraging music, stories and preaching.”

It should be inspirational, Rochford said, but “we must not forget there is business that must be accomplished.”

Business and Reports
This year, the CSBC Executive Board will give its final report on the Focus 21 Task Force recommendations referred by messengers in 2011. The Board reported on four of the recommendations during the 2012 annual meeting. This year’s report addresses the three remaining recommendations.

The budget reflects an increase of a half-percent to SBC causes and a half-percent decrease to CSBC ministries. Percentages for CSBC institutions – CBU and CBF – remain unchanged.

Sermons
The annual sermon will be presented by Pete Ramirez, pastor of Iglesia Bautista White Road in San Jose. Also addressing messengers will be Ferm¡n A. Whittaker, CSBC executive director, and Mike Nolen, CSBC president and pastor of Southwinds Church in Tracy.
Nolen, who has served a one-year term as president, is eligible for a second one-year term and is expected to be re-elected. Additionally, messengers will elect a vice president, music director and recording secretaries.

Pre-convention Meetings
Preceding the annual meeting are the Fellowship of Church Musicians Conference, Pastors’ Conference, On Mission Celebration and California Women’s Meeting. Chinese, Filipino and Hispanic groups have meetings planned prior to the opening session of the Convention.