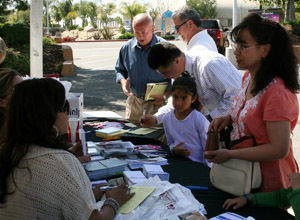 LAKE FOREST – This has proven to be a breakout year for the Hispanic Baptist Alliance (Alianza Hispana Bautista de California) as they held Congreso Anual at Saddleback Church in Lake Forest. It is a testament to the hard work of relationship building between the Alianza president, Victor Pulido, and leadership from the Purpose Driven Church team from Saddleback.

The theme was “La Iglesia Con Prop¢sito” (Purpose Driven Church), and there was representation from throughout California as participants came from as far north as Sacramento.

Dave Holden and David Tamez from Saddleback Church kicked off the weekend by talking about healthy churches. Several pastors said the message “impacted them greatly.” Davidson and Custodio provided messages encouraging participants to believe that nothing is impossible for God.

Custodio shared how God had transformed him from a life of violence and destruction in his native El Salvador to become pastor of a 2,000-member congregation. His testimony reflected the theme of being churches with purpose, looking toward the future as committed Southern Baptists, reaching youth for Jesus and preparing them for a life of service.

Luis Lopez emphasized “The Simple Church” based on Acts 2, while Richard Vera taught about “purposeful evangelism” as he spoke on “Mobilization with Purpose.” Victor Pulido closed the conference with a message pointing toward the future of Hispanic church ministry in California. He noted that this year showed an increase of pastors supporting Congreso, and said the trend will continue “as long as we all become men and women with purpose to fulfill the Great Commission of our Lord and Savior Jesus Christ.”

Alci Rengifo, pastor of Iglesia Bautista Central in Riverdale, was elected vice-president of Alianza, following the resignation of long-time vice president James Page, pastor of El Encino Baptist Church in Fresno. The Medina Brothers, Martin and Enrique, were named as music directors for the group.