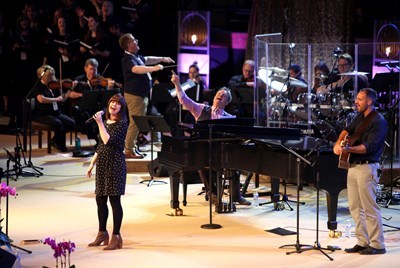 BRENTWOOD, Tenn. (BP) — The first time Keith Getty sat down to write the melody for a new hymn, he penned the now-classic tune for “In Christ Alone.”

It’s been all downhill from there, Getty said with a wry smile at the recent “Sing!” conference in Nashville.

A few of his friends may disagree.

More than 4,000 pastors, music leaders and musicians attended a three-day celebration of congregational singing, highlighted by a standing-room-only hymn sing at the Grand Ole Opry House. The Getty Music-led event was part theological reflection, part how-to training and part feast of hymn singing. Many of the hymns were composed by Getty, recently named an “Officer of the Order of the British Empire” by Queen Elizabeth II.

Getty urged attendees to enjoy being in God’s presence during the conference, seeing it as a time of celebration as well as training.

“We want creativity, we want joy and laughter,” said Getty as the “Sing!” conference kicked off Monday, Sept. 18, at Brentwood Baptist Church, just south of Nashville. “Sing!” is also the name of Keith and Kristyn Getty’s latest book from B&H Publishing, available at LifeWay.com.

The conference was inspired in part by meetings the Gettys had with pastors across the United States. Those meetings left them concerned about the state of congregational singing in churches.

After Sunday services, he said, few pastors were asking, “How did the congregation sing?”

That’s a concern, he said, as singing plays a vital role in passing on the Christian faith from generation to generation.

“God’s people have learned their faith in significant part by what they sing,” Getty said.

More than half of conference attendees were pastors. Getty urged them and the musicians present to see themselves as partners in mission — building up “deep believers,” grounded in theology and devotion to God.

For the first of what they hope will be annual events, the Gettys invited speakers such as pastor Alistair Begg, International Mission Board President David Platt, theologian D.A. Carson and radio host Joni Eareckson Tada. Musical guests included violinist David Kim, the concertmaster of the Philadelphia Orchestra, and bluegrass legend Ricky Skaggs.

On Tuesday morning, Platt drew a direct connection between congregational singing and missions.

Platt described congregational singing as both a delight and a duty. In worship, he said, we enjoy God’s presence — which puts mundane pleasures like wealth and power to shame.

“This is our delightful duty,” he said. “… Our deepest joy, pleasure and satisfaction is not found in the pleasures of this world but in the worship of our God.”

He urged pastors, music leaders and musicians to see singing and worship as a group activity — not a spectator sport. When Christians take part in worship, they join with the church throughout history in praising God.

“Participation establishes our continuity with the people of God throughout history,” he said. “… When we sing we are dedicating ourselves to the mission of God.”

Trust and relationship are key

Getting people to sing isn’t easy, said conference speakers. It’s not something you can persuade people to do by cheerleading or making them feel guilty.

One way to start is by reminding people of God’s goodness and grace in their lives, said Begg, senior pastor of Parkside Church near Cleveland, Ohio.

Reminding people to set down their cellphones for a few minutes would help as well, said D.A. Carson, research professor of New Testament at Trinity Evangelical Divinity School.

It’s hard to worship or to sing God’s praise when you are constantly distracted, he said.

Trust is also key, said Mike Harland, director of LifeWay Worship and a longtime music minister. Speaking on a panel about how to improve congregational singing, Harland said a song leader has to earn people’s trust.

“You’re earning the right to lead them,” Harland said.

Panelists also urged music leaders to search high and low for songs that span the breadth of Christian life.

Churches need songs that teach theology as well as songs that make an emotional connection, Rea said. The idea is to create a balanced spiritual diet of music.

Next year’s “Sing!” conference will be Sept. 10-12, 2018, at Nashville’s Music City Center. Registration is already open at www.gettymusicworshipconference.com.