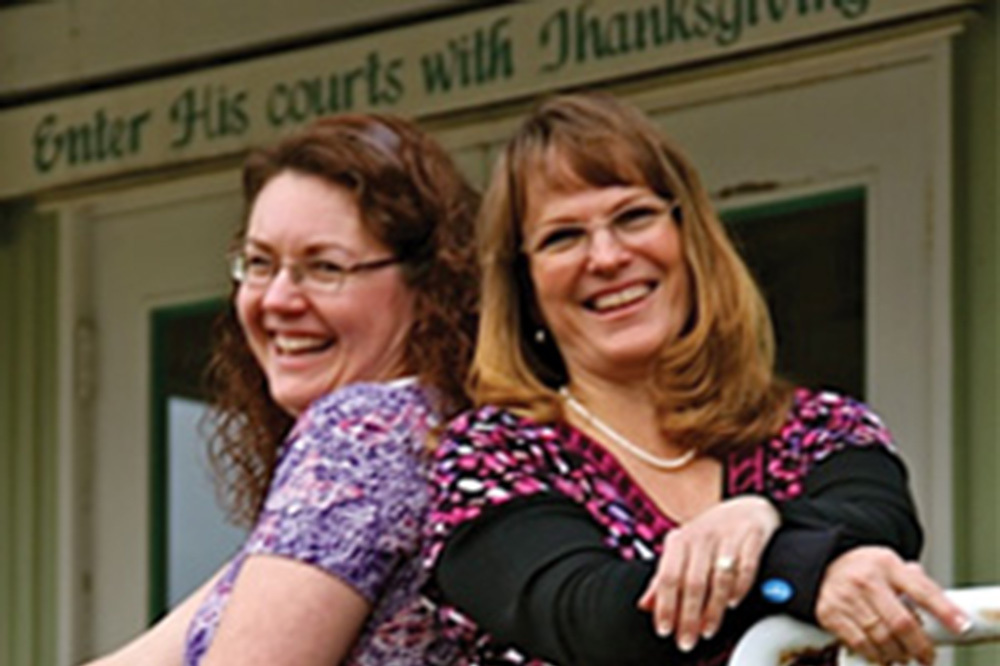 COLFAX – Robynn Wren and Debra Fulenwider have lived in Colfax for over a decade and attend Colfax Baptist Church. Over the last 10 years they have served on the worship team and various committees together, but for the past several months they have been meeting for a different reason. They are part of a mentorship program Debra is hoping will not only impact their church body, but their small community as well.

“Our oldest daughter and her family were moving to Australia,” said Fulenwider, who has four grown children. “One of her friends approached me about the possibility of mentoring her. I had never really considered doing anything like that, but it really started me thinking about the power of mentorship, especially since I had just been challenged to look for areas to serve.”

Fulenwider had spent two summers on evangelism teams that traveled from church to church during the 70’s and 80’s. The teams were organized by Harry Williams, then-director of evangelism for California Southern Baptist Convention, who had a vision of helping churches and equipping the younger generation for ministry.

Last year Debra, along with her husband Karl, a ’75 team member, went to a reunion also organized by Williams.

“Harry had a vision to reach out to others,” Fulenwider said. “The volunteer evangelism teams were active for 20 years. Realizing that the trend had passed, Harry wanted to encourage us to continue reaching out. We really were just lumps of clay but he saw our potential and pushed us to use our skills in reaching others for Christ.”

The week before the reunion, team members were saddened to hear of Williams’ death. Instead of canceling the event, it turned into a memorial of continuing his dream. The well known pastor of Saddleback Church, Rick Warren, was on the first evangelism team.

“It’s like surfing,” Warren said at the reunion. “When you are on a surfboard you can’t keep riding the same wave. If you try to stay on it you will lose your effectiveness and run aground. You always have to keep your eyes open for the next powerful wave and be ready to hop onto it.”

According to Fulenwider, the challenge to keep moving forward became a personal quest.

“Your lives aren’t done,” Warren continued. “You need to take the lessons you learned in the 70’s and 80’s and be an influence wherever you are, in your families, your communities and in your churches. Look for the next wave God has for you and be ready to catch it.”

When Fulenwider came home she continued thinking, “What is my next wave?”

“I had benefitted from being with my mom, aunts and a grandmother, all godly influences in my life. I know that not everyone has that heritage,” Fulenwider said. When I was approached about being a mentor, I really felt like that was what I needed to look into, not just for me, but for others as well.”

She talked to her pastor about starting a program and after getting the go-ahead, approached the women in the church. “I asked if they would be interested. Robynn was the first to shoot her hand into the air.”

For Wren, it wasn’t just a great idea, it was an answer to prayer.

“I had been asking the Lord to bring a mentoring woman into my life,” Wren said. “I had someone who took me under her wing when I was just a baby Christian years ago. She helped me read and study the Bible, and was there to keep me accountable and pray with me.

“When she moved away,” Wren continued, “I really felt the loss of that influence in my life. I had grown spiritually, but I still want to talk to a woman who has been married longer than I have and who has already raised children.”

Wren, whose daughters are 14,12 and 8, candidly talks about not being raised in a Christian home, and the value of having positive role models. While discipleship usually involves Bible study and scripture memorization, mentoring focuses more on relationships and building trust on a personal level.

“We have attended the same church for years,” Wren said. “Now I know Debra is more than a sister in Christ, she is my friend. I know I can trust her and that she loves and prays for me. I needed that in my life.

“Mentoring takes the biblical concepts of being a mom and wife and makes it real and practical. It also gives us the opportunity to be part of someone else’s life.”

Both women hope to see the mentor program grow and include a male program as well.

“It seems like such a small thing,” Wren said. “But it does impact others, and the baton of godly living needs to be passed to the next generation. It not only is a gentle way to hold each other accountable, but is a support system to walk together in areas where one of us is weak.”

Fulenwider has some encouragement for those who assume they may not have anything to offer.

“We aren’t looking for someone to be perfect,” Fulenwider laughed. “We just need someone to be there! Some women in our congregation have been married for over 50 years and raised families. They have so much insight that only comes from living through a lifetime of experiences. We have so much to learn from each other. The benefit of being in a mentoring program is that the relationship really goes both ways.”

Fulenwider currently is fine-tuning the program, which has been dubbed “M and M’s.” She was surprised at how many resources were available on the subject.

“With all the media influence,” Fulenwider noted, “we have become an isolated and disconnected society. If we really want to reach out to our communities, we have to start by strengthening the fabric of our churches. I think being a part of building authentic relationships may just be the wave I was waiting for.”