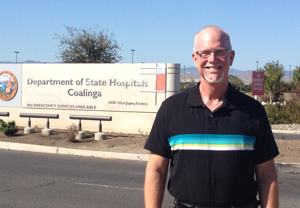 COALINGA — When a resident of the State Mental Hospital in Coalinga, a facility housing convicted sex offenders, sent a plea for a protestant minister to preach in the facility’s chapel, God led Pastor Terry Glover to answer the call.

“The individual started writing different churches … and was not getting any responses,” Glover said in a recent interview. “He ended up writing a letter to the California Southern Baptist Convention. The Convention called me and asked if I would be interested in going out and preaching to them. That’s how it got started.”

Coalinga, population around 13,000, is mostly a farming and ranching community. The main sources of income are the farms, ranches and oil fields. Coalinga’s other main industry is incarceration, housing the Pleasant Valley State Prison and the state mental hospital.

Glover has served on staff at First Southern Baptist Church in Coalinga for nearly 14 years, first as associate pastor and now as senior pastor.

“Our church has 50 to 75 people on a Sunday. We barely meet bills. But God always provides what we need,” Glover said.

He has ministered at the mental hospital for the past two-and-a-half years, off and on as his health allows.

When Glover first began his ministry there, he said he was cautious.

“It’s a dark, dark place that’s hated by most people, even Christians,” Glover said. “People there are pedophiles and rapists. They’re considered worse than murderers.”

Many of the facility’s residents previously served time in prison before being transferred to the mental hospital. All the residents have been convicted of sexual criminal acts and have a history of sexually deviant behavior.

The facility serves as both a place to offer treatment and counseling, and as a means of keeping convicted sex offenders isolated from the rest of society.

Many of the residents at the mental hospital have been confined for 30 years or more, Glover said; they hope they will eventually be released, but most never will.

“It was really intimidating at first,” Glover said. “I asked the Lord what He wanted from me when I went there. He said, ‘Number one, I want you to give them hope and show the love of Christ. Number two, I want you to remember that My light shines brightest in dark places.’”

When Glover visits the hospital, he holds worship services in the chapel. Residents lead worship music, then he preaches a message.

“The fellowship in there is a conglomerate of all different worship styles,” Glover said. “Most of the guys that come are repented Christians. They still have to deal with their weaknesses and do counseling. But when they’re worshiping, it’s dynamic.

“I call it a ‘bapticostal’ experience,” he laughs.

Glover said he tries to show the residents respect and offer encouragement. But he also speaks frankly with them about their issues and the way God has called them to live.

In the few years Glover has been ministering at the facility, he said he has seen God work greatly in the lives of some of the residents.

“There have been some who have really taken off the old clothes and put on the new,” Glover said. “We have had 18 baptisms, and we have several more scheduled.”

One of the men Glover baptized previously founded the Wiccan group in the facility. But he observed the witness of Christians, and eventually surrendered his heart to the Lord.

Glover said the spiritual warfare within the mental hospital is intense.

“I know the devil does not want me in the facility preaching God’s Word,” Glover observed.

His congregation at First Southern has been supportive of his ministry at the facility, he affirmed.

“Some were concerned about how I could go in there, because they detested what these people had done, and they were scared for me because it is such a dark, demonic place,” Glover said. “But God opened the door, and He is blessing it.”

As a result of his ministry, Glover said he has learned to see the men in a new light.

“I’ve learned to be compassionate, and not to be so quick to profile people,” he explained. “It has put me a little bit more at ease, but still cautious of the barriers I need to put up when working with (them).”

Glover said he regularly reminds his congregation that Jesus sat with sinners, and ate with tax collectors and prostitutes.

“He didn’t condone them. But He revealed who He was to them. And that is what God calls us to do,” Glover said.