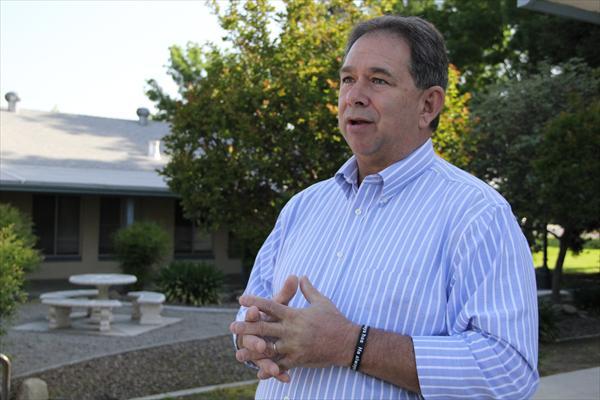 CMO is an avenue to go beyond walls

Seeing past your own nose, your own walls, and your own “kingdom” – these are just a few of the benefits of giving to the California Mission Offering, according to several pastors whose churches gave $1,000 or more in 2012.

“It’s not ‘Us four and no more,'” says David Peugh, pastor of Cornelia Avenue Baptist Church in Fresno. “Participating in the CMO gives our church the incredible benefit of a mindset that we are a Kingdom organization. Our church understands we’re in a large group of churches that have come into covenant together to help truly make a difference in this state.”

Larry Fanning, pastor of First Baptist Church in Clearlake, says, “Giving in particular to missions is about seeing past your own nose. There are as many people of certain ethnic groups in California as there are in their own country. We’re connected to people from all over the world. Therefore we have tremendous opportunities.”

Adds Jeff Lettow, pastor of First Baptist Church in Lemon Grove, “The CMO helps motivate us and keeps our eyes off of ourselves, out to the horizon here in California. It helps us get outside our own walls.”

Montia Setzler, pastor of Magnolia Avenue Baptist Church in Riverside, refers to Scripture in explaining why his church participates: “We’re a part of a mandate that is given to all of our churches in Acts 1:8. We’re to be witnesses to Jerusalem, Judea, Samaria, and the ends of the earth. It’s not an either-or assignment, but a both-and assignment. Participating in the CMO helps us fulfill that assignment.”

So when FermÌn A. Whittaker, executive director of the California Southern Baptist Convention, issued a challenge last year for 1,000 CSBC churches to give at least $1,000 to the CMO, these pastors were among the 127, or about a 25 percent over 2011, who responded in the affirmative. Whittaker has reissued the challenge for 2013. This year’s CMO goal is $444,444.

“The challenge for churches to ante up, to be part of something larger, was very appealing to me,” says Peugh. “It’s important to make sure our church understands God’s total call – and that sometimes our role is just to help pave the way for the people God’s called to the work.”
Setzler thought the challenge was “a good way for a lot of churches who may have felt like they could not participate. It was a way to help them see an achievable goal.”
Fanning says he took Whittaker’s challenge personally, and that was “the key.”

“To be honest, I thought, ‘If I have to I could do this on my own,'” he says. “But as a pastor I need to look past myself. Pastors generally try to save the world, but if they get their heads straight they realize it ís about what God’s led them to do. I have a small church, and I put my fair share in, but it was a churchwide effort to be one of those 1,000.”

At First Baptist of Lemon Grove, says Lettow, the challenge was less about ability and more about commitment.

“We had to say, ‘We’re committed and want to be a part of the team, part of reaching the goal, because we believe in the work we’re doing here in the state,'” he explains.

Lettow served on the CSBC Executive Board several years ago, and between the exposure he received about state missions and ministries, and other individuals at Lemon Grove who are committed to state ministries and to Woman’s Missionary Union, “we felt we needed to support our [California Southern Baptist] family.”

Setzler describes it with this word picture: “Say you put California’s 38 million people all on the 1,500-mile stretch of the West Coast. There would be just over 2,100 California Southern Baptist churches reaching out to that population. On the East Coast, 38 million people in 1,500 miles covers the coast from New York to Ft. Lauderdale, Fla. But that geographic area includes 8,000 Southern Baptist churches! So the challenges are pretty daunting.”

Most churches who financially participate in the CMO also participate directly in California missions. Lemon Grove partners with Shadow Mountain Community Church, in San Diego, to serve in the “Feeding Those Who Feed Us” statewide migrant ministry, which is supported by CMO gifts.

Adds Fanning, “There’s a trend toward ‘But we have needs here.’ And we address those – our church has a food ministry, clothing ministry, and other local mission projects. But the Great Commission is about the world, Jerusalem, Samaria, and the world. And California is our ‘Samaria.'”

Peugh appreciates the fact that a healthy percentage, 14 percent, of the CMO funds is allocated for local, associational ministry.

“Through the California Mission Offering we accomplish two things,” he explains. “The funds stay in California for exactly what we’re raising them for, and a significant percentage stays within our local association, for our specific target of ministry.”