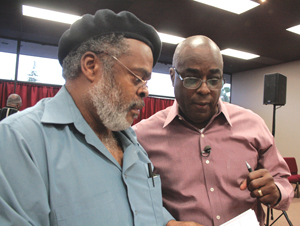 SACRAMENTO – A chicken-and-ribs restaurant is nice, but it doesn’t always make an ideal backdrop for 40-plus women in a Bible study, at least not on a regular basis.

“Nobody was complaining, everybody was being generous,” explains Billy Cummings, pastor of New Love Ministries in Sacramento, describing the church’s search for a building of its own. “But you just get to a point where you know you need more space.”

So the young church, begun almost by happenstance just two years ago, began looking for a place within its budget, and eventually was offered too good a deal to pass up: a local Jewish man renovated a vacant building he owned, and asked New Love Ministries to simply pick up the rent. Sundays see about 125 in attendance; weekly Bible studies include more; and, in a twist that would thrill most pastors, about twice as many families support the church financially as actually attend it. Most of all, more than 45 people have been baptized since the church began.

“There is growth, for sure,” Cummings understated.

In February 2010 he was told by the church he’d served for several years that he was welcome to preach and teach occasionally, but not to serve as ongoing associate pastor. (The church had a new senior pastor and new board.)

“I decided I’d just go back into the car business,” recalled Cummings, whose background includes that, insurance and chaplaincy, all prior to pastoral ministry. “My wife and I were going to another church, had our tithe check in hand, when a family from (the former church) asked us to stop by their house that evening.

“But when we got to the house, it was full of people who wanted to thank me, and have a service,” Cummings said. “We thought it was just people who felt bad for us, but the Lord spoke to me then and they wanted me to pray, and give a sermon and all that. The Lord spoke to my heart then, told me to take up an offering for some reason, and I did. ‘This is for new love,’ is what I heard. I guess that’s where we started.”

“New Love Ministries is one of the healthiest church starts in our region,” said Ron Jackson, one of California Southern Baptist Convention’s church planting strategists for African-American new work. “I think this is partly because of Billy’s good leadership, and partly because of how the church started – with a number of mature believers from a solid, established church. Who already tithe,” Jackson added with a wink.

As a member of Sacramento Baptist Association and CSBC, New Love benefits from the same resources, events and personnel assistance as other Southern Baptist churches, including the California Mission Offering. And so Jackson, while not in a traditional church planting strategist role with the congregation, meets monthly with Cummings, participates in some evangelistic events and has preached at each church anniversary.

“Our church mission is to ‘Exalt the Savior, equip the saints, and evangelize the sinners,'” Cummings noted. “In John 15:25, Jesus said ‘they will know you by your love.’ This is why we call ourselves New Love Ministries. We are here to minister to the body of Christ and to a lost world.”