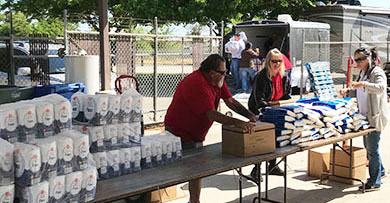 Churches team up for Feeding Those Who Feed Us ministry

PARLIER — Feeding Those Who Feed Us has been a popular California Southern Baptist Convention ministry for nearly 20 years, seeing thousands of migrant workers make professions of faith in Christ.

On April 21, two CSBC congregations worked together to provide bags of groceries before the summer events got underway, as migrant families settled into the Parlier center housing.

Ron Barker, associate pastor of Mountain View Southern Baptist Church in Lake Isabella, one of the participating churches, said he suggested to Oscar Sanchez, who heads up Feeding Those Who Feed Us for the Convention, “that the folks in the camp didn’t need food in July, they needed it when they moved in.”

Barker noted that “when the ministry started 17 or so years ago, that’s how we introduced ourselves to the folks. Somehow, over the years that got changed to giving the food in July when the last day of ministry included a barbecue and evangelistic rally.”

Members of Mountain View and Annadale Baptist Church in Sanger bagged groceries and distributed 130 of them to the 115 families at the Parlier Migrant Center; they left the remaining food for those who would arrive later.

As the Mountain View volunteers distributed food, Sanchez and members of Annadale Baptist, where he is pastor, shared the gospel with those waiting. Sanchez said later that 10 made professions of faith that day, and he planned to begin a weekly Bible study.

Mountain View, Annadale and Copper Springs Church in Clovis will visit the center later in July to provide VBS, free clothing for children, more food and an evangelistic service.

“Our folks went up last year for the final day and fell in love with the ministry,” Barker reported. “They came home and asked me if they could get backpacks for the kids. We’ve already purchased 100 backpacks and our Ladies on Mission group is putting in school supplies.”

One of the hallmarks of Feeding Those is providing one set of new clothing, including tennis shoes, for each child at the center.

Barker noted that in January “some of our ladies made key-rings with numbers 1-130 representing each apartment at the center.”

Members of Annadale and Copper Springs received the key-rings that weren’t distributed in April, and are praying for the families that will move into those apartments.

“I would like to get addresses of the next site the residents will go to,” Barker added. “That way we can contact churches and/or associations that will be near the next work site. I know that some of the workers will simply be going back to Mexico, but what a great way for us to do ‘foreign missions’ from the States!” Barker said.

“We can send back new believers, connect them to established churches and cooperate in discipling believers — one of the Convention’s ways of reaching the masses at home and beyond!”

For more information about Feeding Those Who Feed Us, visit www.csbc.com and search for “feeding” or call 559-256-0843.