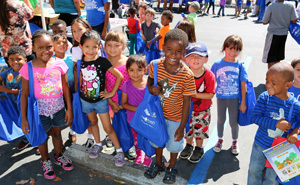 WASHINGTON (BP) — Southern Baptist churches of various sizes and in various settings are feeding the hungry in the US. And a sizable number of Americans remain in need of such help. Nearly 50 million Americans, or about one in six, live in “food insecure households,” according to Feeding America, a nationwide network of 200 food banks.

Many people turn to churches in their need. More than two in 10 Americans (22 percent) say their family has received help from a church-run food pantry, LifeWay Research reported in November.

Southern Baptists staff and stock thousands of local church and communitywide faith-based hunger ministries across the nation. Some have in-house food pantries. Some cooperate with community food banks. Some work with local ministries or agencies. Some provide after-school meals. Some place food in school-children’s backpacks for the weekend. Some assist with community gardens.

In addition, the Southern Baptist Convention created Global Hunger Relief (GHR), through which individuals can contribute to hunger needs in North America and around the world. Gifts to GHR annually fund numerous hunger projects, with 80 percent going to overseas hunger needs, administered through the International Mission Board, and 20 percent going to North American hunger needs, administered through the North American Mission Board. Because of Southern Baptists’ giving through the Cooperative Program, 100 percent of GHR funds help relieve hunger, with none used for administrative costs.

Meeting hunger needs opens doors for volunteers to proclaim the Good News of salvation in Jesus Christ. Russell Moore, president of the Ethics & Religious Liberty Commission, has encouraged Southern Baptists to participate in GHR “not simply as an act of charity, not simply as an expression of our love, certainly not as bare humanitarianism, but because we are a gospel people who, as we feed and as we clothe, are speaking and preaching a message that Jesus is Himself the Bread of Life.”

Whether receiving funds through NAMB or not, Southern Baptist churches are feeding the hungry. Here is a look at how three churches help relieve hunger in their communities:

New Seasons Church in Spring Valley uses a nonprofit ministry on its property to distribute tens of thousands of meals each year to people in its poor neighborhood 11 miles east of San Diego.

The multi-ethnic church, which averages about 700 in attendance, was already running an active food ministry when it established the non-profit, Heaven’s Windows, in 2009. Its outreach to the hungry consists of:

Of the people Heaven’s Windows serves, some “aren’t saved; they don’t know any churches,” Kretschmar told SBC LIFE. “When they go through a crisis, they’ll remember that church, and that opens a door for ministry.”

“I can make you a long list of volunteers I have now that came to volunteer before they were saved and joined the church,” Kretschmar said. “They got baptized. They’re in church. They’re in ministry.”

“Once people see the love of Christ is real and there’s no gimmick,” they are receptive to hearing the gospel, said Vines, former president of the SBC’s National African-American Fellowship.

Trace Creek Baptist Church in New Johnsonville, TN ministers to the needy in a town of fewer than 2,000 outside Nashville.

Trace Creek, which averages about 150 in Sunday worship, helps with the county’s church-run food pantry and stands ready to provide food when the pantry cannot, Pastor Mark Warren said.

The church also cooperates in a weekend backpack ministry with four other churches. The combined effort provides snacks and other food items for students whom teachers have identified as likely having a need for nutrition. The backpack ministry serves about 60 elementary and junior high students, Warren estimated.

The Wednesday night Awana ministry also has resulted in feeding needy children. A significant portion of the 80 to 90 children who participate during the school year are unchurched, Warren told SBC LIFE. After learning some children arrived at Awana without eating dinner, the church now feeds about 70 each Wednesday evening.

Hunger ministry is “an obedience thing more than anything, because there’s probably not a lot of fanfare with it … . You don’t want to bring embarrassment to people through it,” Warren said.

A note goes to families whose children are part of the backpack ministry to inform them that churches are cooperating to provide the food.

“So naturally, to those families who are affected, it shows we care and aren’t just about getting you into our building,” Warren said. “We want to be obedient to need.”

The Summit Church in Durham, NC, with attendance at eight campuses of around 8,000 each weekend, focuses on relationship-building that enables those receiving ministry to recognize what God is like.

“The church is God’s demonstration community,” said Matt Mig, pastor of local outreach. “So He’s putting on display His feeling, His desire for them, and His character through how our people act.”

This kind of relational approach to ministry, Mig said, can be a “first step” for many, who ask, “How am I going to go outside my comfort zone right here where I already live and intentionally engage someone whose path I wouldn’t have otherwise crossed, unless I was pursuing them, because the gospel changed my life?”