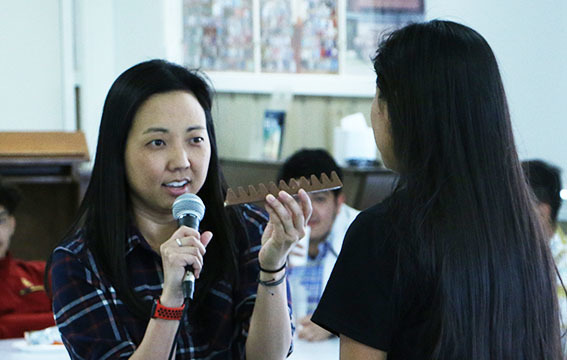 Churches band together to minister to high schoolers

FRESNO — According to the Oxford Dictionary, “ecumenical” is defined as, “Promoting or relating to unity among the world’s Christian Churches.”

That definition has been lived out in Easton, a suburb of Fresno, for more than 30 years by the Lutheran, Presbyterian, Catholic and Southern Baptist churches.

Members have banded together to provide lunch one day a week for students at Washington Union High School, across the street from the Lutheran church, under the auspices of Fellowship of Christian Athletes.

Neil Marthedal, a member of New Life Community Church (the Southern Baptist congregation), who died in 2015, began the ministry in 1988; his wife Nancy took over after his death, now coordinating volunteers from the four churches and enlisting speakers.

“But I’d rather be hanging out with the kids,” she said.

When the Marthedals moved to the Easton area, he was asked by an FCA leader to become involved with fund-raising for the ministry.

“Neil told him yes, if you’ll start an FCA at Washington Union High School,” Nancy related. And the ministry was born.

The churches sponsored breakfasts at first, but “it was difficult with the fog, so we’ve been having lunches every week,” she noted.

Some days it’s a sandwich and chips, some days, especially in the winter, a hot meal; dessert is almost always included. Leftovers are often sent home with the students since, as Marthedal said, it could be the only meal some of them have that day.

She also is involved with FCA’s summer sports camp; this year more than 70 students from Washington Union were signed up for the camp held at UCLA.

Marthedal helps raise funds for camp, which costs nearly $600 per student, and “when I go ask for donations for the sports camp I go to every single one of the churches” in town, she said.

A sportswoman herself, Marthedal coached softball at Washington Union “for a very long time,” she said.

She went to one of the sports camps and “saw what FCA was about,” and became more involved in enabling students to attend.

“This community is not … privileged … Christian children,” Marthedal said with emotion and obvious love for the students who participate in the weekly lunches and the sports camp.

Each of the four churches takes two months of the school year to provide lunch for any student who chooses to cross the street to the Lutheran church. Marthedal and the FCA ministry have a good relationship with school administrators, who even provide a crossing guard for the students.

Some come “just for the free lunch,” she admitted, but as many as 100 students at a time hear a gospel presentation each week.

She used a Toblerone chocolate bar as an object lesson for the students, dramatically reading the ingredient list from the package, including the confusing technical terms.

She then called a student up and offered a bite of the candy.

“It’s one thing to hear about Jesus and another to actually look deeper for yourself,” Kim told the students. “As much as I told you about the ingredients in the candy bar, it made no difference until you actually taste it.

“From information to actually tasting the chocolate is a different experience — knowing about Jesus is different from accepting His gift of eternal life in Him.”