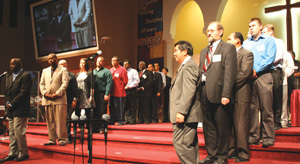 FREMONT – An evening focused on church planting was the highlight of the California Southern Baptist Convention annual meeting, as more than 70 church planters serving throughout the state were recognized Oct. 25 at New Life Church in Fremont.

In introducing the recognition service,

Fermín A. Whittaker, CSBC executive director, said, “Southern Baptists have not just discovered church planting. We’ve been doing it for more than 100 years across America. It is proof that God is alive and well.

“We are not retreating from the task.”

Whittaker noted that in past years there have been commissioning services for international and home missionaries during the annual meeting, but “I believe this is the first time we have honored our state workers.”

He said California Southern Baptists, and church planters today, “stand on the shoulders of thousands of other believers who walked the streets of California, knocked on doors, lived in barns and visited in communities that were hard to reach, because we believe every man, woman, boy and girl in California needs to hear the gospel regardless of what language he speaks.”

Each of the 72 church planters introduced himself and told the name and location of the church he had planted. The introductions were interspersed with video presentations – one about church planting in California and three featuring church planters who participated in the service.

The group represented nearly 15 ethnic/culture groups. Each year for the past several years, CSBC has started about 100 new churches for African-American, Anglo, multi-cultural and ethnic groups. Through November 15, 111 new or newly-affiliated works had been reported in 2011.

Steve Davidson, CSBC president and pastor of Clovis Hills Community Church in Clovis, told the men, “Church planters, we are for you. We are on your team. We honor you.”

As the planters stood in the aisles of the church among the more than 700 attending the session, Davidson pointed to a banner with the Convention theme, “Together: Making Disciples of every ethne.” He noted it is a paraphrase of the Great Commission, and said, “This (ministries like church planting) is why we give money to the Cooperative Program. This is why there is a California Southern Baptist Convention. This is what is going right.”

He then asked the crowd to “lay hands on and pray for the church planters” just as the first century church in Antioch did for Paul and Barnabas.

Frances Chan capped off the session by saying church should not be “just about gathering people into a room, but it’s about sending them out.”

The noted author and speaker highlighted the meeting theme, and lamented that the current American Christian culture is “not willing to make disciples.” But Chan exhorted the church starters and pastors in the room: “We’ve got to get our people back out there.

“Jesus called us to be disciple-makers,” he said. “The Holy Spirit will give you the words to say. He’ll empower your people to be witnesses, to be disciples.

He said pastors should consider whether their church members would “be able to feed” themselves because they were “taught how to study the Word of God,” or if they would be able to “tell somebody else about Jesus.”

“That’s the goal. We have to equip our people,” Chan asserted.

Chan also exhorted them to believe that the people in their churches can make disciples.

Chan recently resigned as pastor of Cornerstone Church in Simi Valley to have more time for writing and to begin hands-on ministry in San Francisco. He and several others have “adopted” the Tenderloin District of the city, in which they go door-to-door, praying for people, asking about their needs and helping fill those needs.