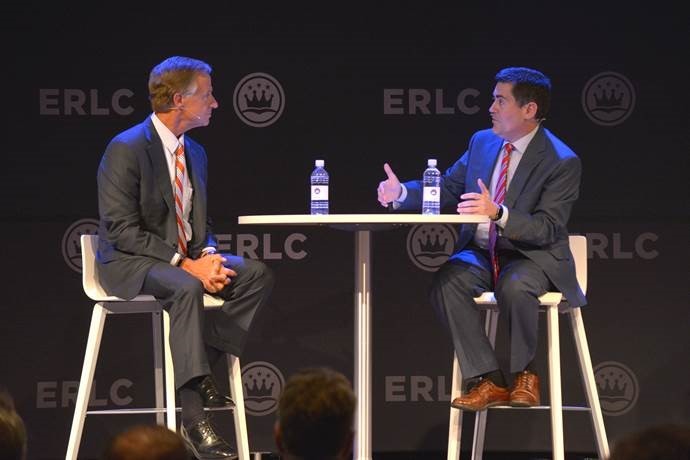 NASHVILLE (BP) — The church should be at the forefront of promoting civility in a deeply divided culture, Tennessee Gov. Bill Haslam told Christian leaders at a Southern Baptist-sponsored event in Nashville.

“We, of all people, understand grace,” Haslam said of Christians at an Oct. 3 lunch held by the Ethics & Religious Liberty Commission (ERLC), “and we of all people understand, ‘You know, I don’t really have the right to be on a high horse yelling at you because but for God’s immeasurable grace I’d be a mess. So we should understand the need for civility.

“By the same token, we also believe in truth,” he said, adding he still hopes he can have a civil discussion with those who disagree with him. “Understanding grace, I think, changes everything about all of your relationships.”

Haslam appeared at the ERLC Leadership Lunch in the SBC Building to answer questions from the entity’s president, Russell Moore, and the audience of pastors, leaders and other Christians from Middle Tennessee.

During the governor’s appearance, Moore presented Haslam with the ERLC’s 2017 Richard Land Distinguished Service Award, which goes annually to a person displaying excellent service to God’s kingdom. The ERLC trustees unanimously approved Haslam for the award at their meeting in August.

In presenting the award, Moore pointed to Haslam’s conviction and civility. Haslam has served as a model “for people all around the country when it comes to articulating a view of human dignity” on such issues as abortion and foster care, Moore said, adding he also has spoken out on behalf of religious freedom.

“What I appreciate about our governor is he is able to do that in a way that can persuade people who are out there in the sort of persuadable middle … and has really led our state to think about the forgotten people,” Moore said.

He became a Christian when he was 16 years old during a weekend Young Life camp in the mountains of North Carolina, Haslam told the audience. It marked the first time he had heard the Gospel of Jesus clearly presented, he said. The speaker urged the young people not to fail to decide about Christ. The message stuck with him, and he accepted Christ sitting on the steps of a gym, Haslam said.

Two or three weeks later, his mother — only 42 — died of a heart attack while taking a nap, Haslam said. “Those same folks who had worked to try to get me to go to camp and to introduce the Gospel were the same folks who literally enveloped me. And so from the beginning I got a great picture of: ‘Here is what the body of Christ looks like,'” he said.

Haslam succeeded as a businessman, was elected mayor of Knoxville before winning the governorship as a Republican in 2010. He will finish his second and final term as governor in January 2019.

When U.S. Sen. Bob Corker of Tennessee announced recently he would not run for re-election in 2018, Haslam received encouragement to run for the seat. The governor announced Oct. 5, two days after the ERLC Leadership Lunch, he would not run for the Senate so he could maintain his focus on being governor the next 15 months. After 15 years as a mayor and governor, Haslam said he believes he can be most helpful as a private citizen.

Moore asked Haslam how he remains a Christian in business and politics.

“For me the answer is simple,” he said. Starting when Haslam was in his late 20s, four other Christian men showed up at his house every Friday morning to be open with one another. “Honestly, I think having a relationship with that group of guys has been the kind of steadying influence in my life.”

Asked about how he handles all the decisions he has to make as a governor, Haslam pointed to three factors.

“I hope it begins with the thought that this isn’t about me — this decision,” he said. “Hopefully you start out without the pressure of: ‘OK, what do I need to do to look good in this situation?'”

Second, he tries to surround himself with wise counselors. No. 3, and most important, “I honestly feel that all of our decisions are characterized by being followers of the Gospel. They just are,” Haslam said. “[The decisions] are all, I hope, not just seasoned by [the Gospel] but determined by what we believe to be true.”

The governor told those attending they would be shocked at how similar their jobs would feel if they swapped places with him.

Moore asked the governor how he deals with criticism.

“I take all criticism as with some validity,” Haslam said. “On the other hand, we can’t be a prisoner to it; we can’t be captive to it.”

When asked from the floor what issues the church in Nashville or Tennessee could help address, Haslam cited foster care and racial reconciliation.

“I think the church can help us to have a whole different conversation around racial reconciliation,” he said. “And I say that because we’re the people that believe that one day every tongue and every tribe and every nation is going to kneel down together. And if we really believe that, that changes all our conversations.”

The ERLC Leadership Lunch is held three or four times a year for pastors, leaders and lay people to gather for a discussion of contemporary ethical and cultural issues. Sometimes the format is a question-and-answer session with Moore. At other times, the lunch features interviews with special guests or presentations on relevant topics.