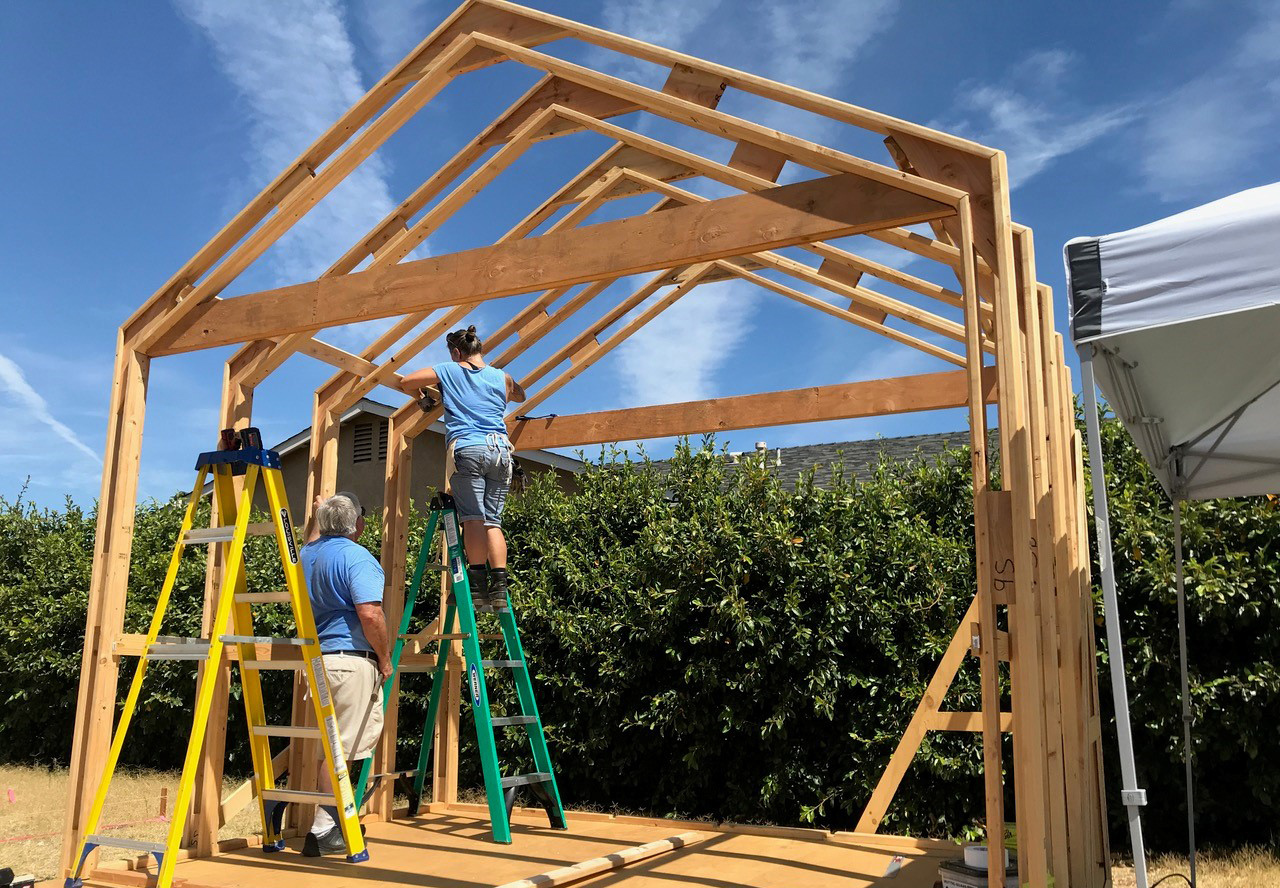 On a vacant lot at Slade’s senior pastorate Meridian Baptist Church in El Cajon, Calif., a tiny cabin is being built as an emergency, secure shelter for homeless women and children.

“All that we were doing before was growing tumbleweeds,” Slade told BP Wednesday (Aug. 7), regarding the land. “Where now, if we’re able to build this little village of emergency sleeping cabins, we’re able to minister to people. We’re able to come alongside of them and really … meet them at their point of need and share Christ with them, and love on them, bring them back into safety and … give them dignity.”

The church that draws just under 100 to Sunday morning worship is not funding the project, but has partnered with Amikas, a nonprofit advocacy group for homeless women with children, with a focus on veterans.

Amikas raised the $4,000 needed to construct the cabin, a wooden, mobile unit which has no electricity or running water, but offers 96 square feet of living space behind a locked door.

Currently, Slade only has permission from city government to erect on the lot one cabin as an unoccupied showcase, but eventually hopes to secure permission to use it as an emergency shelter for the homeless and perhaps house additional units. As designed, those sheltered there would have access to church utilities.

“The biggest resource a church needs is the love of Christ,” said Slade, who serves as vice chairman of the Southern Baptist Convention’s Executive Committee. “Because I firmly believe that all the resources that are needed are there. Instead of operating out of scarcity, trying to figure out what our budget is, how we’re going to do this, we pray and we start to move in faith.

About 20 volunteers are building the cabin that Slade estimates will be completed within a couple of weeks. The Rose Society of San Diego garden club has agreed to landscape the lot at no cost, Slade said.

Slade met Amikas through his membership on the Regional Task Force for the Homeless in San Diego County. Representing San Diego County’s faith community on the task force, Slade met with Amikas to discuss how smaller congregations can help house the homeless.

“We just opened our hearts and said, ‘What can we do?’ We’ve got to do something,” Slade said, “because people are just getting in desperate situations. People are living in cars, sleeping under bushes.”

“The plan is to be who we are called to be, to love people and meet people where they are, build a relationship with them, and minister to them at their point of need,” Slade said. “It’s beyond a rotational shelter.

“It’s literally a roof over a person’s head and being able to sleep behind a locked door and be safe,” Slade said. “I’m hoping that other churches would look at this model and say, ‘Hey, we could do this as well…. We have a vacant lot.'”

The model can be replicated in other communities beyond San Diego County and California, Amikas told the San Diego Union Tribune.

Meridian Baptist has built a relationship with its community and government over more than 50 years, Slade said. Current church ministries including a Wednesday community meal and a monthly shower trailer bring the church in contact with many homeless people affected by San Diego County’s housing shortage, Slade said. The church has communicated its intent to its neighbors, whom Slade said have been supportive.

“What I anticipate is the ladies who would eventually use one of these cabins are already connected to our congregation in that way,” Slade said. “We know who they are, we’ve met them, talked to them, we’ve built a relationship and we can help them just get some rest behind a locked, safe door. And then from there, talk about connecting them with services.”

The project is a good use for land that the church was using only to hold a couple of storage sheds.

“It wasn’t serving a purpose,” Slade said. “We were just growing tumbleweeds and having to mow down the weeds every month.”