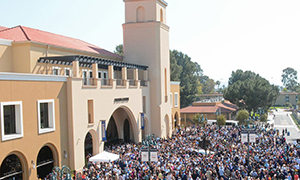 RIVERSIDE — Approval of a record $321.5 million budget topped the agenda of the spring board of trustees meeting at California Baptist University.

It calls for 10,987 full-time-equivalent students (those taking at least 12 units). The largest revenue stream in the budget is tuition and fees, which account for 88.4 percent; the largest expense is for institutional scholarships at 26.3 percent, followed closely by instruction at 22.7 percent.

During the week of the trustee meeting, CBU wrapped up three days of commencement ceremonies at the new Events Center (see story this page).

Trustees approved a recommendation allocating $5 million in surplus reserves from the 2018 operating budget for matching funds for qualifying endowment gifts made to any university-controlled endowment. A similar recommendation was approved in 2017.

CBU President Ronald Ellis reported the engineering building is scheduled for occupancy in August, and construction on a 1,450-space parking structure is underway.

He also said CBU will join the Western Athletic Conference (WAC) and begin participating in NCAA Division I sports in June. He noted the Events Center was a “key component” in the transition.

In other business trustees:

The next trustee meeting is set for Sept. 28 in Riverside.