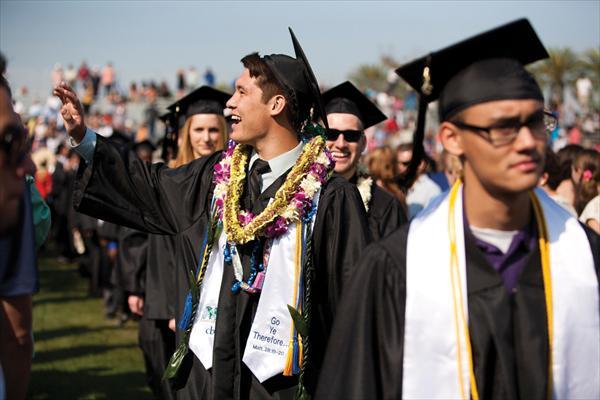 RIVERSIDE — Approval of a $189.5 million budget for 2013-14 and commencement ceremonies highlighted the California Baptist University trustee meeting May 3.

Budget
The $189.5 million spending plan is an increase of $17 million, or 9.9 percent, over the 2012-13 budget. More than 7,000 undergraduate, online and professional studies, and graduate students are needed to meet the budget goal.

Commencement
In his commencement address to the 1,117 graduates, Ronald L. Ellis, CBU president, said, “Remember that the path you take largely will be determined by the choices you make. Not just directional choices, but spiritual choices, relationship choices, occupational choices and even recreational choices. The key is to make sure you demonstrate integrity in those choices as a fundamental expression of your character.”

The 1,117 graduates included 599 traditional undergrads, 308 candidates for masterís degrees and 210 undergraduates completing degrees in online and professional studies programs. Combined with the 285 students who graduated in December 2012, the class of 2013 included 1,402 degree applications, the largest number of candidates for graduation for a single year in CBU’s history. It is the fifth consecutive year the annual total exceeded 1,000.

China partnership
In his address to trustees, Ellis noted a new partnership with Henan Province in China that has the potential to create a “significant flow of future students” through a 3 + 2 program, with the first three years of education provided at Meiyu University, followed by the final two years at CBU. He said the opportunity would be in selected academic programs.

As part of the partnership, CBU would send qualified ESL (English as a Second Language) instructors, drawing primarily from alumni of CBU’s International Service Projects who would be employed by Meiyu University to teach English to students in the program. He said the ESL teachers would be paid a salary, provided with an apartment, five days of meals per week, health-care and roundtrip airfare.

“This could become a model for CBU graduates helping fulfill the Great Commission,” Ellis said.

Walt Crabtree, a member of Sierra Baptist Church in Pioneer and chairman of the CBU board, told trustees the university currently ranks “fourth in enrollment among all Southern Baptist colleges and universities.” He remarked that 20 years ago CBU was “well down into the bottom half of Baptist universities.”

The next meeting of CBU trustees is slated for Sept. 27.