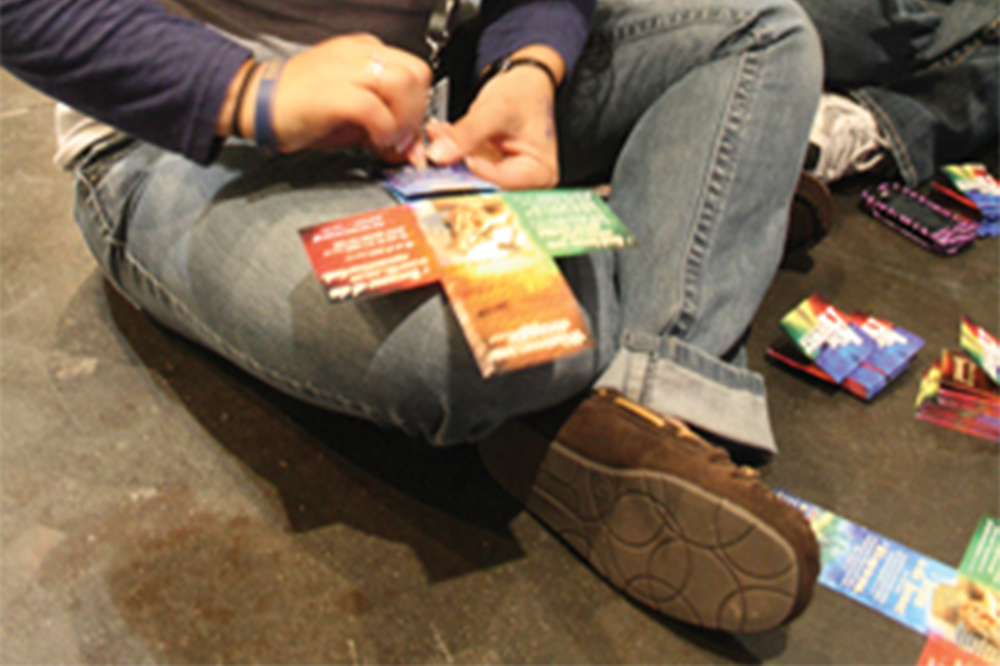 SANTA CLARA – Since the mid-1990’s, California Baptist University students have worked to make the Tsunami Student Conference a success, according to one of the event’s organizers.

Sherann Kim, California Southern Baptist Convention youth evangelism specialist, said, “The CBU students who work at Tsunami are amazing. Every year, they come with servant hearts as well as willing and giving spirits to serve.”

Kim, who coordinates and supervises their work during the three-day event each December, said they do a variety of tasks, but primarily help with set-up and tear-down.

One of the students’ main responsibilities, according to Kim, is to set up the “Hot Topics” offered to youth and their leaders. She noted they make sure the audiovisual equipment and other requests of conference leaders are fulfilled.

Additionally, Kim said the collegians work in the exhibit and game halls where they have opportunities to interact with junior high and high schoolers.

“Through CBU students working during the conference is how I found out about CBU,” said Kim, who grew up in San Jose and graduated in 2004 from the Riverside university affiliated with the Convention.

Two veteran CBU volunteers, Jonathan Slater and Lisette Nichols, agree that even though they work hard, and long hours, the students are the primary motivation for their efforts.

Slater, an “old hand” having worked the youth event four years, said, “The students who come to Tsunami are at a key point in their lives. This gives me the ability to interact with and be a ‘touchpoint’ to encourage them to keep their eyes on Jesus.”

Nichols echoed Slater’s sentiment: “It is great to interact with and see students open up about their spiritual walk throughout the conference.”

Even though Tsunami is only three days, Nichols said she sees “spiritual growth” from one day to the next as students attend general sessions and Hot Topics and have devotions.

Slater, who grew up in Newman, and Nichols, an Upland native, agree they get more out of working at Tsunami than they give.

“The overall experience is good,” Slater said. “But what makes Tsunami great is the people, because they have the right attitude and passion for students.”

Even though she didn’t attend Tsunami when she was younger, Nichols urged churches to “send their students to this event for spiritual growth and refreshment. Not all of their questions will be answered, but they will be challenged to grow individually and as a group.”

Daryl Watts, CSBC student and family specialist who organizes Tsunami every year, noted the CBU students are “an integral part” of the conference.

Kim added, “They represent Christ and CBU very well. It is unbelievable how they give of their Christmas break for three days. It would take a great deal of effort to replace what they do … they are a tremendous asset to the conference.

“This is a fabulous partnership we have with CBU.”