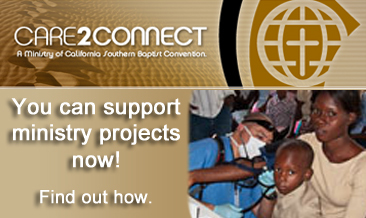 FRESNO – Care2Connect, an online giving ministry of California Southern Baptist Convention, is designed to engage individuals in financially supporting ministry projects that transform lives in California and throughout the world.

It is one way for CSBC to “highlight and tell the story of CSBC ministries and the needs that exist, while seeking individuals to support ministries for which they have an affinity,” according to Judy Logan, CSBC director of strategic giving.

She said direct support of ministries is “happening among California Southern Baptists,” as they support staff or missionaries of para-church or other organizations.

“There are many good causes out there,” Logan said, “but not all are equal and not all causes share the gospel, which is our priority.

“Care2Connect provides the giver an opportunity to meet a need while also sharing the gospel in the context of ministry projects such as disaster relief, migrant ministry or children’s camp,” Logan explained.

She said most “charitable givers” donate to at least three causes in addition to tithing and giving to special offerings in their local congregation. “This process affords California Southern Baptists the opportunity to give directly to a ministry God may have placed on their heart,” Logan said.

Projects cover most facets of CSBC ministry, Logan said, and give California Southern Baptists “a closer look at California missions and mission projects. Care2Connect gives a bird’s-eye view of what’s happening and how individuals can become involved.”

Additionally, Care2Connect affords “CSBC church members and others a clearer picture of CSBC ministries that they might not know about. And by supporting these efforts, individuals provide a message of hope in a very tangible way,” Logan said.

She noted those who give receive information about the project they support, and added it is “convenient to participate in Care2Connect with projects being posted online coupled with the ability to donate various amounts, beginning at $25.”

Projects are accessible from the front page of the CSBC Website – www.csbc.com. “New projects are featured each week,” Logan said.

She also noted “gift cards” are available for purchase to use on the site. “Gift cards are a great way to honor others by giving them the opportunity to give.”

Logan said cards can even be purchased for children or teens. “This is a great way to teach our children and grandchildren the joy of giving. With so many families having their needs met, a gift card is a wonderful expression of meeting spiritual needs by sharing Jesus.”

Care2Connect is not an attempt to take away gifts to the Cooperative Program, Logan emphasized. “Our desire is to offer individuals who care deeply about specific projects and ministries the opportunity to make a targeted difference,” Logan said.