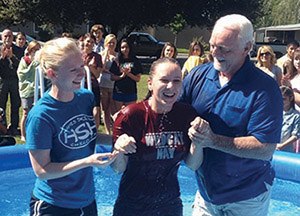 California has nearly 30 full-time Baptist campus ministers, most of whom raise their own support. One California Southern Baptist Convention church has a full-time college minister, and four have “college ministry combination positions,” reported Daryl Watts, CSBC student and family specialist.

He noted nearly 16,000 collegians were impacted by Southern Baptist campus ministry programs in the Golden State in

2014-15, including 251 who made professions of faith in Christ. That reflects a 156 percent increase in the number of students who came to Christ over 2013-14 reports.

“These figures show how dedicated and successful our campus ministries are,” Watts declared. “These men and women are impacting a new generation of leaders and ministers. This is especially true of the work with international students.

“Many of them will return to their home countries and be the only Christian in their circle of influence,” Watts noted.

Kevin Thorsell, campus minister at San Diego Mesa College, said his team “constantly prays for God to send us a ‘person of peace’ — for someone who is open to the gospel, influential and peaceful.”

A student named Thanh said that the night before he met Thorsell he had been praying for God to provide him with “godly community where he could grow spiritually,” Thorsell said.

Thanh was a person of peace for the group, Thorsell noted, and throughout the semester he helped “cast vision to the other students for using their lives for Christ.”

A student at Chico State, Marianna, had a vision to share the gospel on her campus, resulting in a freshman named Julie putting her faith in Christ.

Marianna told Paul Worcester, campus minister at Chico State, that she was nervous when she first started sharing the gospel, but “after starting to read the verses she began to feel very confident and excited to proclaim the Good News to Julie,” Worcester reported.

Marianna later wrote on facebook that “this encourages me to share the gospel with more people. God’s work never ceases to amaze me!”

On their own initiative, two students at Grossmont College in El Cajon began sharing the gospel twice a week on their campus.

“Every Tuesday and Thursday right after class, they will share with people they meet on campus using a survey that asks spiritual questions,” Matt Wright, campus ministry leader, reported.

“It was scary for them at first, but their confidence is growing,” he said. “What has made their confidence grow? In the past three weeks, they have seen three people indicate the desire to start a new relationship with Jesus Christ! God is using these two introverted guys to bring people to Himself.

“It is further proof that God can use anyone to advance His Kingdom and that the fields are white for harvest,” Wright declared.

Scott, a self-proclaimed extrovert at California Baptist University in Riverside, also has impacted his campus.

“He began to flourish in ministry as he grew in character and skills of discipleship” through CBU’s Christian Challenge, reported campus minister Bryan Zuniga. “His small group was focused on athletes on campus and he was so excited to see over a dozen students show up to the first one.

“The last meeting of the year had close to 50 athletes and he estimates that 70-80 different athletes came during the year,” Zuniga reported.

She meets regularly with new students, saying, “One reason I love these appointments is because it means that the student replied to my text message and then agreed to go out of their comfort zone to meet with a total stranger, all the while knowing the content of the meeting would be focused on discussing faith stuff.

“So I enter these meetings encouraged and slightly anxious, but in a good way, with the hopes of where the conversation could go,” Worcester said.

During one such recent meeting, she was able to present the plan of salvation to a freshman. While the girl didn’t immediately make a profession of faith, she agreed to begin a Bible study with Worcester.

“When I asked her how I could be praying for her this week, she said, ‘Just pray that God would help me put faith in Him,’” Worcester said.

“This was seriously one of those meetings where you knew that God had been setting things up for awhile and He just allowed someone like me who had simply been equipped to explain His message get the honor of sharing it with someone He had been drawing to Himself before we ever crossed her path.”

Daryl Watts said of the collegiate ministry efforts, “Our churches and convention should be proud of our campus ministers. I encourage churches to partner with them whenever possible.”