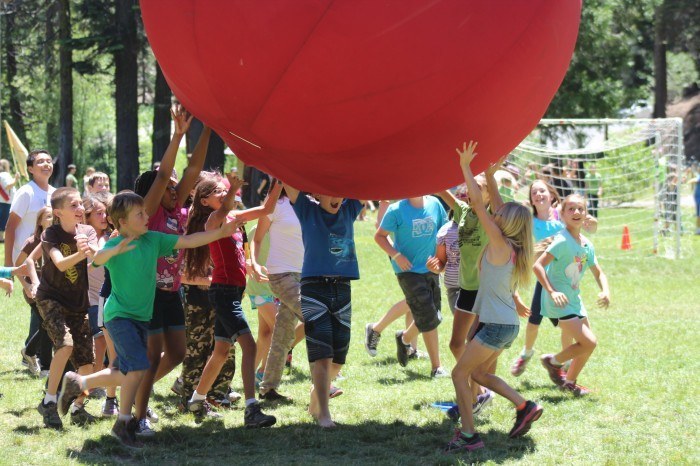 JENNESS PARK — Though California is in the midst of a drought, Jenness Park Christian Camp is praising the Lord for the water available to campers and staff for the summer months.

June 18-28, Mother Lode, Delta Valley and Central Valley Baptist Associations worked collaboratively to provide camps for children from first grade through college. Twenty-six of the 423 who attended made first-time professions of faith in Christ.

The children’s camp theme was, “We’re Not Home Yet,” with the focus passage coming from John 17:16-17: “They are not of the world, even as I am not of it. Sanctify them by the truth; your word is truth.”

Tanzania where they ministered. The children learned songs in Swahili, became familiar with the culture, and learned about the beliefs of the Tanzanian people. The Giddens told the students how they taught in seminaries and universities in order to train Christian leaders in Africa.

Pastor Jon Hathorne from First Baptist Church in Linden presented evening messages. He used illustrations, illusions and visual aids to teach that God is bigger than the universe yet cared enough to send His Son to save us and give us a way to be united with Him for eternity.

Ava, a 4th grader from First Baptist Church in Patterson said, “I learned that God is strong and He knows how to take care of us.”

The youth camp theme was, “Be Wise O Kings” taken from Psalm 2:10-11, with the idea that believers need to cast down their crowns because Jesus is the only King of kings.

When asked about his goals for his messages, Buren said, “It is my desire that students would grow in their relationship with Christ and not need to be spoon-fed truth from the Bible, but that they would desire to seek Christ on their own.”

Evening messages were provided by Nathan Gardner and Dale Torres Jr., both from First Baptist Church in Patterson.

Gardner spoke about the life of John the Baptist, who willingly insisted that Christ be above all else. Once people accept that everything comes from Christ, they develop an eternal perspective that helps them share the news of eternal life with others.

Torres spoke about God’s sovereignty, looking at the lives of Saul and David. God, in His sovereignty, chose to bless King David’s lineage with bringing forth Christ as the chosen Messiah.

The youth camp also provided breakout sessions including “Unlocking the Mysteries in Genesis,” “The Reliability of the Gospels” and “Discerning God’s Will for Your Life.”

Jessica, one of the leaders, remarked, “I want to present the gospel from a perspective the students might not have seen before. We see

in Peter’s life the calling, drawing, heartbreak and healing that we each experience as part of salvation. Like Peter, we must deny ourselves and call Christ Lord.”

The college camp was held over a long weekend to allow working students to attend. They heard from Ben Skaug, vice president for institutional advancement at Golden Gate Baptist Theological Seminary, who was keynote speaker. He talked about the transforming power of God, using the key example of how God transformed “Jacob” into “Israel.” The man whose name means “trickster” became the namesake of God’s chosen people.

The college students were challenged to allow God to work in mighty ways in their lives.

For more information about camping experiences at Jenness Park, visit www.jennesspark.com or call 800-258-7554.