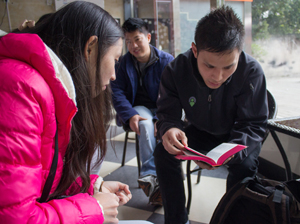 EAST ASIA (BP) — Leaving without saying goodbye and making a special delivery wasn’t an option. Before returning to their home state of California, Joshua Zheng* and Timothy Chen* arranged to meet one last time with the more than 20 new believers they led to Christ during their two weeks in East Asia.

“We wanted to give you a gift before we return to the US,” Chen told six new believers who gathered to meet him and his teammate for lunch.

The new believers received Bibles from the two, complete with a handwritten note inside the title page.

Chen and Zheng are members of a multi-ethnic church in California. “I’m very excited for the journey you are about to begin,” Chen told the new believers.

For the past four years, Zheng and Chen’s church has sent volunteers to minister alongside International Mission Board workers and local believers in East Asia.

This winter, they were part of four short-term volunteer teams who set their biblical standards high as they shared the gospel with more than 3,500 people and led 242 to follow Jesus Christ.

The teams, partnered with the IMB and local believers, saw astonishing results from three weeks of witnessing about the love and forgiveness Christ offers.

Local believers are following up with those who made professions of faith. The local church, International Mission Board workers and US churches all minister together as one — showing that missions is more effective working together.

Christopher Lim,* an IMB worker in East Asia, said this area was once known as a missions-sending Antioch and he hopes believers will rise again to repossess its heritage of faith. Short-term volunteers are helping believers recapture their Antioch, the biblical city that was a center for Christianity.

Lim was a short-term volunteer when his team saw entire villages profess Christ, as well as hundreds more who traveled dozens of miles because they heard Americans with a message had come to their shores.

Lim has seen firsthand how God uses short-termers, and that’s one of the reasons he and his IMB teammates utilize volunteers.

Teams from California, Oklahoma, Texas and Singapore have made multiple trips, and continue to champion the work while stateside. Their partnerships are long-term and ongoing.

Benaiah Bak,* a wor-ship leader at a California church, said their close tie with Lim is how their partnership began.

“As a church that supports workers like Lim as well as other (IMB) workers, I think the key is to keep a long-lasting relationship with the people we are supporting globally,” Bak said.

Mark Cho,* a pastor in California, said his church keeps returning to East Asia because of “the spiritual fruit, both for our team members and for those whom they share with, (that) we see each time we send a team.”

Music was one way the team from California ministered. Bak and Philip Gyeong,* a junior at San Jose State University, played worship songs while local believers distributed invitations to an outreach party.

Zheng, who is Taiwanese-American, said he realized his life was worth more than just crunching numbers and that’s why he came. He works for a company in Silicon Valley that develops ads for cell phone applications.

Zheng and Chen, who is Chinese-American and works for Stanford University, had dinner with 15 university students and all became Christians. At another meal, six students professed Christ.

Through the California team and the local believers with whom they partnered, more than 30 people made decisions of faith and many more heard the gospel for the first time.

Lim said he’s seen from experience that volunteers who come and serve on their own don’t have as much success.

“One of the things that has really been revolutionary is to ask, ‘What are the needs on the ground?’” Lim said.

He noted they follow the local churches’ lead — they decide what is secure to share in different settings. This way, Lim said, the US church has optimum effectiveness and it’s a safe and valuable investment of time for the local church.

“You can do so much more when you have people working together for a common reason,” Lim explained. “When you do it strategically, things really come together.”

He called the results miraculous. Short-term volunteers ministering with local believers makes for a perfect equation for seeing many enter the Kingdom, and together, they’re “trying to awaken the giant,” Lim said.

Local believers had more opportunities to share because people were drawn to the Californians, not only because they’re American, but because three members of the team are Korean-American.

People throughout the nation love Korean pop music and TV shows. It was a conversation starter for the Korean-Americans — albeit a short conversation.

It turned out the East Asian students knew more than the visiting team did about Korean pop culture. The Californians listen to the rapper Trip Lee and the band Needtobreathe and watch basketball and football.

Michael Kim,* a minister of outreach, compared ministering alongside local believers to a “good alley-oop” — they toss the ball up and the local believers go in for the basket, he explained.

Local churches continue to invest in and nurture the new believers.