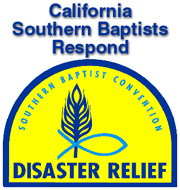 Those words often bring to mind disasters; they trigger emotions and memories difficult and poignant. Southern Baptists – including hundreds of Californians – have had a common response to all of them: help.

Disaster relief has captured the hearts of volunteers from all backgrounds. Regardless of race, age, gender or social status, there seem to be no barriers to keep volunteers from serving people in need. Hundreds of thousands of survivors of disaster, both natural and manmade, have received tireless service from tens of thousands of Southern Baptists.

Through May, California Southern Baptist Convention sent nine teams – 62 volunteers – to help repair schools and homes in the Philippines, stricken by Typhoon Haiyan in November 2013. The California volunteers also share the love of Christ with those they’re assisting.

“The mission of every disaster relief team is to bring help, healing and hope,” said Fritz Wilson, executive director for Southern Baptist Disaster Relief (SBDR) at the North American Mission Board. “Meeting a family’s physical needs with practical help starts their healing process, which leads to a sense of hope that things will be better. This gives us the opportunity to share a different type of hope that is only found in a relationship with Jesus.”

That important spiritual element sets SBDR apart from other large relief entities. NAMB has placed the national SBDR team in its evangelism group to maintain an intentional evangelistic focus in Baptist relief ministry.

One by one, survivors have asked the question, “Why?” Why would people come help someone they do not know? That question has led to tens of thousands of gospel presentations and thousands of professions of faith in disaster settings.

Innovation and adaptation have marked SBDR efforts across 46 years of service. Need often drove innovation, including the introduction of laundry and shower units and the creation of child-care teams. Southern Baptists’ heart of compassion also led to more long-term responses, culminating in the two-year Sandy Rebuild project now underway in New York and New Jersey.

“The disaster relief team at NAMB works not only to coordinate volunteers from across the country to meet physical needs, we also partner with local churches, associations and conventions to be sure both the gospel is shared and that new believers are connected to a body of believers so they can grow as Christ-followers,” Wilson said.

SBDR also has developed a bridge to Southern Baptist church planting efforts. The strategy is now an integral part of SBDR ministry.

“If there is no local congregation, we work with the NAMB mobilization team to explore the possibility of planting a church in that area,” Wilson said. “During the 2013 flooding response in Boulder, Colorado, SBDR teams from Oklahoma worked with a church planter, Derek Barnett, so he could meet the families we were helping. This allowed him to build relationships with the families, which will accelerate his ability to start his church plant.”

There are approximately 90,000 trained SBDR volunteers from every state Baptist convention and Canada, including some 3,000 volunteers in California. It is a rare day when there is not an SBDR volunteer working somewhere around the world sharing the gospel in the midst of disaster recovery.