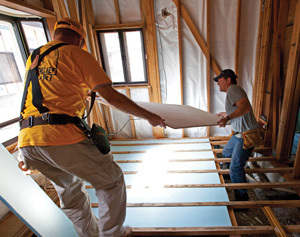 TOHOKU, Japan (BP) – When Nobuko Tanno closes her eyes, she sees tsunami waves rushing in and destroying her village along Japan’s northeastern coastline. She sees cars floating and houses coming off foundations. She hears the roar of the water and desperate cries for help.

Her normally stoic face contorts a little with the flood of memories and she quickly opens her eyes. Remembering that fateful day one year ago, March 11, 2011, is still hard. She fixes her gaze on the odd-shaped frame on the white wall in her refurbished home. It immediately brings a smile, and a contented sigh escapes.

By her reaction, you’d expect the framed object to be a peaceful painting; but it’s just a section of the drywall where Southern Baptist Disaster Relief teams signed their names and wrote Bible verses as words of encouragement. For the homeowner, however, it’s a priceless masterpiece that she’ll cherish for the rest of her life. It’s a reminder that there is hope for the future.

“After the tsunami, my husband and I tried to clean up. By ourselves, we couldn’t do much. It was overwhelming,” Tanno explained. The entire first floor was damaged and piled high with debris lodged in toxic mud. “Then, the ‘yellow shirts’ (Southern Baptist Disaster Relief workers) came to my door. They treated my house like it was their own.

“Their attitude was, ‘Thank you for letting us serve you.’ I was really surprised at their servant heart,” Tanno said of the teams from California, Washington, Oregon, Missouri and Canada that worked on her home throughout the year. “Thank you. Thank you for what you did for my family.”

Tanno points to a verse, Jeremiah 33, on the wall. “That is my favorite. It was the first one,” she said. “I don’t understand all of it but I am learning.”

Mickie Lee, a member of Clovis Hills Community Church in Clovis, smiles when her friend mentions scripture. Lee, who came with two different disaster relief teams and stayed on to serve as an interpreter, remembers when the homeowner was skeptical. The Californian explains that Tanno is not yet a believer but is studying the Bible a team gave her, starting with the verses on her wall, so she can understand what makes these “yellow shirts” so different from other volunteers.

“Yellow Shirts”
Southern Baptist teams, known in this part of Japan by the yellow shirts, hats or vests they wear, responded to the world’s first triple disaster – a 9.0-magnitude earthquake, tsunami and nuclear crisis – within days. They have kept a steady presence ever since by working through the IMB’s Tohoku Care ministry.

California Southern Baptist Convention has sent nine teams since the disasters struck, deploying 32 individuals who have served in a variety of capacities. Don Hargis, CSBC Disaster Relief director, returned from his second trip in February.

Teams from 14 other states have done everything from mudding out houses and rebuilding to hearing survivor stories and hosting banana split parties. Others have made their impact from afar. A group of GAs from Georgia made rag-dolls so teams could hand out toys to children who lost everything. Women in Louisiana made 4,000 Christmas stockings for IMB missionaries and Disaster Relief teams to distribute as a way to share the Christmas story.

Survivor Ryouichi Usuzawa said the Tohoku Care volunteers are different in the fact that they meet more than just physical needs – they care about the emotional and spiritual. They often do this simply by listening to survivors, like Usuzawa, recount their harrowing escape from death or playing games to help them forget the nightmares.

Like more than 323,000 other Japanese, Usuzawa’s home was destroyed and he was forced to move into temporary housing. Any flat piece of land was used to set up pre-fab houses. Many villages and families were split up, forcing most to deal with grief and depression on their own. Usuzawa’s new community is among the largest with 2,164 households.

“After we all moved to temporary housing, we just stared at the floor. We had so much grief. It was such a pathetic situation that my heart broke. Then, the volunteers came and listened,” Usuzawa said. He looks back at a new green building and adds, “The reason this community building was set up was so people could come together and share their suffering – encourage one another.”

Through the Japan Disaster Response fund, Southern Baptists provided three community buildings in different locations along the coast. Usuzawa explained that the buildings provide a place for the next phase of Japan’s healing – “heart care.”

“I see this building every day and it’s a signal to me that Southern Baptists in America are telling us to ‘hang in there’ … that they care about us,” the survivor said.

Heart Care
IMB emeritus missionaries Gerald and Brenda Burch stress that the willingness of Southern Baptists to unselfishly give their money, time and prayers have survivors and fellow Japanese volunteers taking notice.

Missionaries say Tohoku (northeast Japan) has been closed to the gospel for hundreds of years. Less than 1 percent even claim to be evangelical Christians in the hardest hit areas. This region is known throughout Japan as being home to “the coldest and hardest” people in the country.

“The steady flow of Southern Baptists since the tsunami has opened doors,” Gerald said. “Before, it was hard to talk to anyone. Now, when they open the doors of their small, temporary houses and see our faces and yellow vests, the countenance on their faces change. They are glad to see us. They invite us in for tea.”

One Japanese homeowner made this dramatic change right before the eyes of two Hawaii Baptist Disaster Relief workers. Leonard Higa of First Baptist Church in Pearl City and David Blair of Lahaina Baptist Church partnered with Samaritan’s Purse through Tohuku Care in refurbishing the downstairs of this home.

Higa, a 70-year-old carpenter, speaks Japanese and at every opportunity, tries to engage the homeowner in conversation.

“She was standoffish,” Higa said, remembering the first few days. “I knew she wasn’t interested in my message, so David and I worked hard to plant seeds by caring for her physical needs. We knew the Holy Spirit would grow these seeds and God would send someone behind us to follow up.”

As he and Blair cut boards, they joked with other volunteers. The laughter carried up the stairs to where the homeowner sat. Soon the joyful noises drew her downstairs. She listened from a corner.

When lunchtime arrived, she quietly brought in pumpkin soup for the workers covered in sawdust. They thanked her profusely but she shrugged it off and went back upstairs. The friendly banter kept drawing her back, though. She eventually joined in the conversations and spent days sharing meals and her own story of survival and grief. At one point, she said she wished she were an American so she could be joyful like them.

“We aren’t happy because we are Americans,” Higa responded. “We are joyful because we have Jesus in our hearts. You can have the same.”

The homeowner looked at Higa for a second then nodded her head – indicating she was ready to welcome that same joy into her heart.

(Rain is an IMB writer based out of Asia.)