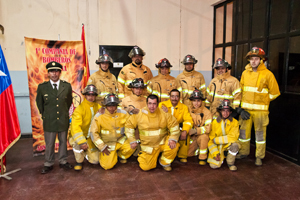 MOLINA, Chile (BP) – The next time Station 1 firefighters in Molina, Chile, are called on to make a rescue, they will finally be doing so in fireproof uniforms. The uniforms were received March 7 as a gift from Southern Baptist Mike Lynch, a fellow firefighter from California who met the Molina crew while doing earthquake relief in Chile last year.

“What we have access to buy is made nationally (in Chile) and sometimes doesn’t meet specifications,” said Danilo Reyes Venegas, captain of Station 1. “This is really a big help for us.”

It took nine months and a lot of prayer to move the heavy equipment halfway around the world. But with God’s help, Lynch – a member of Fellowship Baptist Church in Bakersfield who currently is serving as interim pastor of First Southern Baptist Church in Shafter – came through for his friends.

In the months following the 8.8-magnitude earthquake that hit Chile in February 2010, Baptist Global Response (BGR) – an international relief and development agency – sent multiple teams of volunteers to aid victims of the disaster. Lynch, a bivocational pastor who works at Tulare County Fire Department’s Station 5, led one of the BGR teams when he and five other California Southern Baptists went to the hard-hit town of Molina in May. Don Smith, director of missions for Sequoia Baptist Association, was part of Lynch’s team.

The group visited Molina’s Evangelical Baptist Church and were invited to introduce themselves to the congregation.

“When I happened to say I was a fireman as well as a pastor, there was kind of a rumble in the back of the auditorium,” Lynch said. “It turned out that two of the members of the church there that night were firemen.”

The next day, the firemen invited Lynch to tour the Molina fire department’s Station 1. During the tour, Lynch learned that Chilean firefighters are completely volunteer and receive no compensation from the government. It is a situation that greatly limits their access to the expensive safety equipment they need.

“But I found them to all be very, very dedicated to the work that they’re doing there as volunteers and very, very proud of their fire department,” Lynch said. “They’re dedicated because they’re doing something for their community that nobody else wants to do. It is dangerous work.”

When the Molina firefighters asked Lynch what happens to old equipment in the United States, he began to realize how he might help them. The policy in the States is to replace all equipment every 10 years, regardless of its condition – so there is often an opportunity to share it with other firefighters.

“There’s nothing wrong with the equipment,” Lynch explained. “It’s just used.”
Most of the replaced equipment from his station is donated to firefighters in Mexico. But Lynch could see there was also a need in Chile – a need he might be able to meet.

After returning to California, he contacted the California State Firefighters’ Association’s committee for surplus fire equipment. Through this committee, Lynch acquired 30 sets of fireproof pants and jackets, 18 fire helmets and several fireproof gloves. But the difficulty wasn’t acquiring the equipment. It was getting it to Chile.

Lynch contacted various shipping companies but all were either unwilling or too expensive. Months went by, but no workable option presented itself. During that time, Lynch stayed in touch with his friends in Molina, and they assured him they were praying for God to provide.

Running out of ideas, Lynch sent an e-mail to those who had gone with him to Chile.

The next day he got a reply from Don Smith. “My next-door neighbor, I just found out, does a lot of importing of fruit and vegetables and stuff from Chile,” Smith said. “Let me talk with him.”

When Smith explained the situation to his neighbors, Mark and Debbie Krauter, and asked for their help, they said, “Absolutely.” Not only were they willing to ship the equipment, they were willing to do so free of charge.

Nine months after Lynch’s visit and a week after the anniversary of the earthquake, the firefighting equipment finally reached Lynch’s friends in Molina.

They could not be more grateful.

“For Brother Michael (Lynch) – and everyone who contributed – tell him we are very thankful and extend to him the gratitude of our small community of Molina and the fire station,” said Molina Fire Director Jorge Munoz Venegas. “How proud and happy the firemen are to receive this donation.”