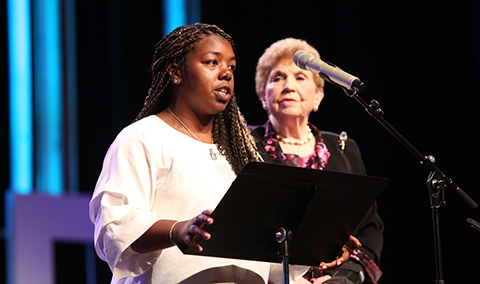 BIRMINGHAM (BP) — With “Pursue” as the theme of the 2019 Woman’s Missionary Union Missions Celebration and Annual Meeting, approximately 1,000 attendees heard testimonies of how God pursues His people.

The sessions were held June 9 at The Church at Brook Hills; the next day, 131 missions activities were available throughout the area.

Retiring missionaries Nik and Ruth Ripken, authors of “The Insanity of God,” thanked WMU for being part of their story through prayer.

“God pursues His people, even when they are in tough places. God pursues those on this (WMU missionary) prayer calendar, even if they are having a very bad day. But it takes your help,” Ruth said.

She said that in Somalia there was a group of 150 believers, all of whom were martyred. Soon after, the Ripkens received a list of another 150 who were to be killed within the next two weeks.

With desperate hearts, the couple called believers in America and asked them to pray.

One friend replied, “After five minutes of me hanging up this phone, there will be 25 people across America praying.” Hours later he informed the Ripkens there were hundreds of people praying, then thousands. Within days, 10,000 American Christians were praying for those being persecuted in Somalia.

And after 25 years of intense persecution, there were no more martyrs for the next five years.

That situation, and many others, taught them many things, including how to be “sheep among the wolves,” Nik said.

“I think one thing that missions does for you and sometimes to you, is to get you inside the context of the Bible, when we’re so addicted only to the content of the Bible.”

He left the audience with a word of exhortation: “Fear always chooses us. But in the midst of that fear we can choose to trust and we can choose obedience to our Savior.”

National Acteens Panelist Dominique DuPar, a member of St. Stephen Missionary Baptist Church in La Puente, and the first Californian to serve on the panel in decades, told the group she was “standing here today because God pursued me through a medical crisis four years ago.”

“I had been having serious headaches with no real diagnosis. One night, my mother noticed that my forehead was protruding. I was rushed to the hospital, then rushed into ICU for surgery around 6:00 that morning. I had been diagnosed with a brain tumor the size of a tennis ball.

“After my surgery, I was supposed to be homeschooled for a year, but I was able to go back to school within three months. God’s grace and mercy pursued me all the way from beginning to end.”

She said God has given her “a burning desire to share with others how trusting in God and having a personal relationship with Him can help you to get through anything.”

“We strive to live our lives in such a way that we are on mission — on call as Christians — each and every day, 24/7. We are to live like missionaries in our own context and community no matter our age, limitations, situations, culture or spiritual development,” she said.

“We are to be relentless in our pursuit of Him,” Wisdom-Martin declared, “and driven to carry out the assignments He has for us.”