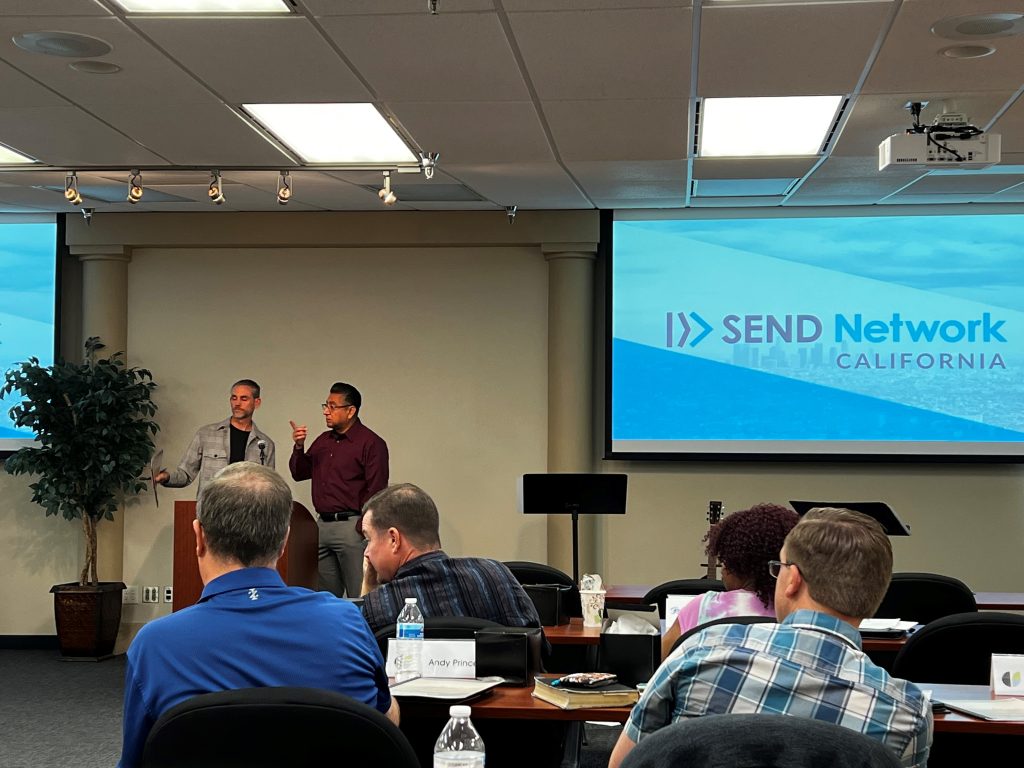 On Friday, September 16, CSBC leaders announced an exciting new agreement with the North American Mission Board, officially making California a “SEND State.” SEND Network California launched on September 6, but the trajectory of this new partnership has been in the works for several months.

In May of this year, California Baptist University served as host to the 2nd annual SEND Network California Summit where dozens of pastors, directors of missions, entity leaders, and SEND Network missionaries came together for an interactive meeting; the purpose of which was to celebrate, communicate, and contextualize church planting in our great state.

Leaders were broken down by region to both evaluate the progress of recent church starts, as well as assess locations, or voids, where there is a need for new church plants. Shawn Beaty, pastor at Clovis Hills Community Church and attendee of the summit said, “I believe church planting is God’s preferred method for evangelism. That was the heart of the book of Acts. The ‘ends of the earth’ was a church planting movement.”

Guests of the summit were invited to help identify region-specific needs such as ethnic opportunities and developing neighborhoods. Daniel Cassels, pastor at Life Way Fellowship Church in Santa Maria, and first-time attendee said, “The summit was very exciting. Since our state is so big, there are a lot of prospective opportunities in a variety of communities … communities that could be changed for Christ.”

The Summit also allowed entity leaders to listen and understand the reality of church planting in the state. The summit included a thorough assessment of current church plants. Beaty continued, “We should always be reflecting over where we’ve been. The key to success is to attempt something, fail, get better, and the circle keeps going. That’s where progress comes from.”

The meeting included a panel discussion moderated by Shane Critser, the west region director at NAMB. Panelists included leaders such as Pete Ramirez, Executive Director for CSBC, Gregory Perkins, pastor of The View Church in Menifee, Kevin Ezell, President of NAMB, and Mike Carlisle, DOM of the San Diego Southern Baptist Association. The panel had an open dialogue to give and receive feedback regarding the future of effective, collaborative, church planting in California. Carlisle shared that attending the summit each year was a priority for him. “In our denominational environment, if you aren’t intentional, you get left out. The key is to intentionally engage one another. Opportunities for us to work together are there, if you wait to be invited, in some cases, you may get left out.”

Those who attended the Summit were, in large part, invited due to their active involvement in funding or sending new church starts. The goal was to help church planting catalysts and churches work together in a unified effort toward a common goal.

Cassels sees this as a win for hundreds of small churches in California. “It’s better when we work together. There’s a wider range of impact and it allows for more involvement that smaller churches may not be able to afford on their own. I see three major elements for church planting efforts: identifying the location, raising up new leaders, and the financial support for the church being planted.”

“As a small church I can’t do all that but with NAMB I can give more, and I can come alongside and encourage a church planting pastor. That gives me and my church greater opportunity to be a part of that vision and God’s greater purpose.”

When asked about the timing of this decision, Pete Ramirez shared, “Now, more than ever, we have a clear understanding that we must work together as a Convention. We are in a post-Covid era and many of our churches have felt the impact. We have no choice but to rethink both how to plant churches and where to plant churches.”

Shane Critser shared with Board members, “Churches plant churches. NAMB doesn’t plant churches. We are your missionaries. We work -and will continue to work,- with California pastors to strategize locations that need church plants. We are here to undergird you.”

Critser went on to remind the crowd that NAMB doesn’t have an inventory of church planters waiting to fill a church. “Church planters will primarily come from your churches, from California Baptist University, from Gateway Seminary.” He explained planters can come from outside of California, but the ask is for the state to begin training and developing future church planters.

While NAMB has developed tools for assessing potential church planters, it’s the church’s recommendation based on relationship. That is fundamental. “We want to equip you to train your planters.”

Establishing SEND Network California is not only in line with Ramirez’s “Better Together” vision, but it signifies the return to an important gospel partnership. In the meeting, Board members presented thoughtful questions regarding this new partnership. In the end however, all agreed to step forward in full support with the intent to reevaluate in the months ahead.

Beaty shared, “I’m ecstatic! As someone who was part of SEND San Diego, I saw how beneficial it was and how many new works could get started. We are now going to see an emphasis on church planting, evangelism, and replanting from the top to the bottom of our state.”

He continued, “As a pastor, it feels like a new day of cooperation in California, and that gets me more excited about the Cooperative Program because our entities are working together.”

Carlisle also sees the connection between CP and this new partnership. “Pastors of churches who give to CP know there is more to just giving the money. We have expectations that our agencies, conventions, associations, and other leaders work cooperatively, lovingly, and effectively. This new relationship sets a tone for cooperation. It’s time to move forward. Let’s pull the rope together.”