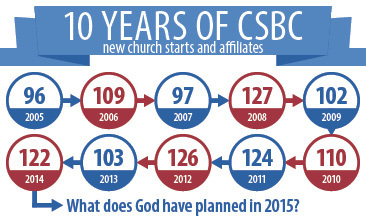 RESNO — California Southern Baptist Convention accounted for more than 10 percent of Southern Baptists’ new church starts and affiliates in 2014, according to a report from the North American Mission Board.

In mid-March, NAMB reported 1,193 new congregations were added to the Southern Baptist Convention in 2014. During that same time CSBC reported 122 new starts and affiliated congregations, for 10.2 percent of the NAMB total.

A mission board spokesman confirmed that CSBC reported the largest number of new starts and affiliates by any state Baptist convention or fellowship in North America.

California Southern Baptist Convention Executive Director Fermín A. Whittaker said, “It has always been a priority of our Convention to start churches. This year is CSBC’s 75th anniversary, and we would not have more than 2,000 congregations if we weren’t committed to starting and assimilating new congregations.

“Almost every year of the last 10, CSBC has demonstrated its commitment to church planting by starting 100 or more congregations.”

Whittaker added that CSBC is committed to “reaching the world in California” and continues its responsibility of “starting and affiliating new churches for language, culture and ethnic groups so they can hear the gospel and respond to Jesus Christ.”

According to NAMB president Kevin Ezell, church planting by Southern Baptists in North America increased in 2014 over 2013.

“This is very good news as we work toward diminishing the church-to-population deficit that steadily grew larger over the last century in the United States and Canada,” Ezell said. “It is also good because new churches, on average, reach people for Christ at a higher rate than existing churches.”

He noted there are good reports in regions outside the South — such as Ohio, New York and the Northwest — where Southern Baptists have not traditionally been as strong.

“We celebrate when a new church is planted anywhere, but increases in these areas are especially encouraging,” Ezell said.

More than 58 percent of the churches Southern Baptists started in 2014 were non-Anglo, according to Ezell.

“This must continue as our society grows more diverse — especially in and around large cities where more than 80 percent of North Americans live. Our churches must reflect the communities they serve,” he declared.

“Another reason California Southern Baptists have been successful in starting new churches,” Ahaev said, “is the expectation of church planters to go through ‘Basic Training’ within the first six months of planting the congregation.”

Basic Training for California Southern Baptists is led by Howard Burkhart, a CPC, and the team he assembles to provide training in English, Spanish, Chinese, Korean and Russian.

Ahaev also believes California Southern Baptists are successful because of the effectiveness of CPCs.

“Our CPCs don’t just recruit and interview church planters to see if they are capable of success — they walk side-by-side with church planters providing mentoring and resources to help planters be successful.”

Ahaev said church planter and new church success is represented by CSBC reporting an average of 111 new church starts and affiliates over the past 10 years.

“There is much more work to be done,” Ezell said. “We need many more churches and we must continue to make our existing churches healthier and more outwardly focused. My prayer is that the growth we saw in 2014 will be the starting point for a Southern Baptist church planting wave, and that more churches and individuals will become personally involved in this effort to evangelize North America.”