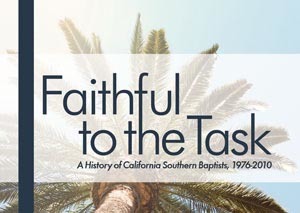 Picking up where “13 Golden Years” and “Heirs of Promise” left off (previous histories written by Floyd Looney and Elmer Gray) the new volume, “Faithful to the Task,” covers the Convention from 1976-2010.

Commissioned by the California Baptist Historical Society, the book was three years in the making. Vi Estel, president of the society, served on staff with Collier at CBU. Estel, who was the book’s editor, heads up the Convention’s historical archive and Collier served in the library. The two worked closely on the project, while California Baptist Foundation funded the printing.

The 120-page book includes many photos, as well as a list of recipients of the Heritage Award, given annually by the society to honor those who have made “outstanding contributions through rare and unusual dedication to the cause of Southern Baptist history in California.”