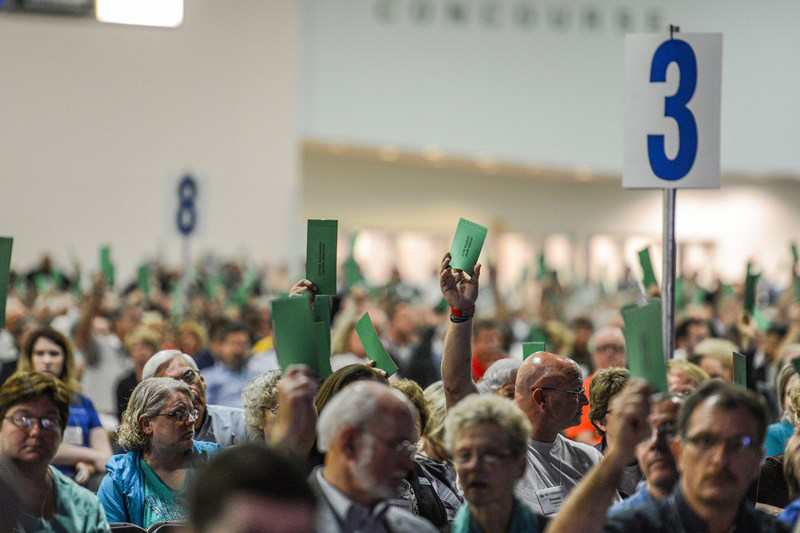 LA MIRADA (BP) – Though a motion at the Southern Baptist Convention annual meeting in Baltimore to “discipline” New Heart Community Church in La Mirada because of its views on homosexuality was ruled out of order, the SBC is looking into the process of “withdrawing fellowship” from the congregation.

Although the path is not yet determined, California Southern Baptist Convention is defining its own procedures to process its relationship with the congregation.

Fermin A. Whittaker, CSBC executive director, said, “I am burdened when Christians, and especially churches, make decisions that are not compatible with scripture. It seems too easy to be lured into unbiblical positions of belief by the power of today’s culture. Scripture is clear that the practice of homosexuality is sin and is not harmonious with teachings and traditions of a New Testament congregation.

“My office is attempting to discover firsthand the truth of what Danny Cortez and the members of New Heart Community Church believe regarding homosexuality in the life of their church. At the same time, CSBC is attempting to determine processes and procedures for addressing this situation.

“Once these are known, CSBC leadership will make decisions of how to proceed regarding the Convention’s relationship with New Heart Community Church.”

Since the SBC annual meeting in June, Baptist Press reported the church in reality never voted to adopt any position on the issue and split into two groups in early June amid unresolvable deadlock, according to Cass Bensberg, an elder of the congregation.

Bensberg, an elder there for 12 years, told BP that on May 18 the church voted on four possible courses of action in light of a February announcement by pastor Danny Cortez that he no longer believes all homosexual acts to be sinful. Before the vote church members stipulated that a two-thirds majority was required to take any action. The church also stipulated that it would separate peacefully into two groups and divide its assets if there was not a two-thirds majority. Because there was no such majority in favor of any option, the church separated as agreed.

The four options presented were:

The faction that went with Cortez retained the name New Heart Community Church and the articles of incorporation. That group will meet in two private homes over the summer and plans to rent property in the future. The group includes an estimated 50 people, with some gay-affirming families joining since the split, Bensberg believes.

In a statement e-mailed to the Southern Baptist Convention Executive Committee, Cortez said the congregation “will develop and articulate a clear Third-Way position statement.”

“While New Heart Community Church has received considerable attention recently, much of that attention has resulted from sensationalist media coverage,” Cortez wrote. “We wish to state that as a church we have done nothing officially to affirm, approve of, or endorse homosexual behavior, and so remain in accordance with Article III of the Southern Baptist Convention’s constitution, even as our individual members, including recognized leaders both paid and unpaid, hold to varying perspectives regarding same-sex marriage.

“Still, in the midst of our congregation’s peaceful and prayerful disagreements regarding same-sex marriage, we remain unified in our vision to invite LGBT persons into fellowship and communion. Moving forward, members of New Heart will develop and articulate a clear ‘third-way’ position statement,” Cortez wrote.

Article III of the SBC Constitution states, “Among churches not in friendly cooperation with the Convention are churches which act to affirm, approve, or endorse homosexual behavior.” The Executive Committee is monitoring developments in the New Heart situation and could consider the matter during its September or February meetings. Depending on how the facts unfold, the EC also could make a recommendation regarding New Heart to the 2015 annual meeting in Columbus, OH.

At the SBC annual meeting in Baltimore, messenger Wiley Drake, pastor of First Southern Baptist Church in Buena Park, moved that the SBC’s newly elected officers lead the Convention to discipline Cortez and New Heart. The motion was ruled out of order because it directed officers to act outside the scope of their duties as established by Article IV of the SBC Constitution, which says, “While independent and sovereign in its own sphere, the Convention does not claim and will never attempt to exercise any authority over any other Baptist body, whether church, auxiliary organizations, associations, or convention.”

Though the SBC cannot discipline a church, it can withdraw fellowship from a congregation and has done so on three occasions – all in response to affirmations of homosexuality.

The process by which the SBC can withdraw fellowship from a church (an action tantamount to removing a church from participation in the SBC’s annual meeting, terminating receipt of benefits that come from inclusion and prohibiting further identification with the Convention) can take various paths.

At press time it was not clear how California Southern Baptist Convention would address the issue. A similar situation has happened only once in CSBC’s nearly 75-year history, when $800 of Cooperative Program gifts from Delores Street Baptist Church in San Francisco were returned in January 1988. The Executive Board then declined to accept the gifts “based upon interpretation of biblical principles” which placed the congregation “in conflict with and not in sympathy with the purpose of the Convention.”