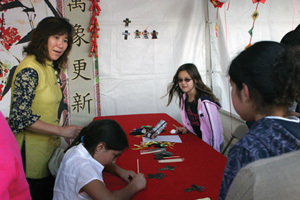 FRESNO – In each of the last three years, at least six Chinese congregations have been in the top 30 churches in California in giving through the Cooperative Program, Southern Baptists’ method of supporting missions and ministry efforts of state conventions and the Southern Baptist Convention. Three of the churches trace their roots to the Los Angeles “mother church,” which sets the example in sacrificial, cooperative giving.

First Chinese Baptist Church in Los Angeles has been, for each of the past three years, the fourth largest contributing church through the Cooperative Program in California Southern Baptist Convention. Benny Wong is senior pastor.

First Chinese Baptist Church in Walnut, where Jackson Lau is pastor, has been in the top eight in giving through CP in California since at least 2010. The congregation was started in 1985 by First Chinese, L.A. Lau was mentored into ministry in the mother church.

“Southern Baptists have always been very supportive,” Lau said. “We basically think the Cooperative Program is a very good idea. … When we were small and didn’t have much finances, the Southern Baptists helped us. As we have been able to grow and we have financial resources, we want to help other churches experience what we experienced.

“It’s not pay-back; we can’t pay back those who helped us in the past,” Lau said. “It’s pay-forward. We can learn from them and follow the experience of their model. We have been beneficiaries for their heart for the Kingdom of God. I thank our Southern Baptist brothers and sisters for their heart for the church. These were people who had a heart for the Lord Jesus. They were willing to give and pray for a people who weren’t yet Christians, and not yet the church.”

First Chinese, Walnut models its commitment to missions through the Cooperative Program through a church it planted in 2010, CrossLife Community in Sierra Madre, which currently is number 86 of the top 100 CP givers in California.

Chinese Baptist Church of Orange County in Anaheim, where William Eng is pastor, has been among the top 30 giving churches through CP since 2010, ranked as high as number 10.

“I tell our church that they are preparing thousands of workers by this CP giving,” said Eng of the congregation started 50 years ago because others gave through the Cooperative Program. “We see the benefits of jointly sharing the cost of doing Kingdom work with other Southern Baptist churches in planting more churches.

“Two plants from our church have started with CP,” Eng continued. “CP helped five of our members serve with the (International Mission Board) that our budget could not have done alone. CP enabled us to adopt an unreached people group in (East Asia) through the Lord’s servant (name omitted for security), an IMB strategic coordinator. And we have a dozen members at Golden Gate (Baptist Theological) Seminary benefitting from CP support.”

First Chinese Baptist Church in Fountain Valley, where Murphy Lum is pastor, has been in the top 30 giving churches through CP in California since 2010. It was started in 1977 by First Chinese, L.A.

Lum gave three reasons for supporting missions through the Cooperative Program: the mother church and the Fountain Valley congregation (originally known as the Westminster extension) were started with Cooperative Program dollars. Second, the focus on missions and the fact that Southern Baptist missionaries do not have to raise their own support or fret about money, which leaves them free to concentrate on doing God’s work. Third, “We love what they do with all the funds, supporting so many things – missionaries and seminaries and so much more,” said Lorena Lum, who translates for her husband.

Chinese Baptist Church of Central Orange County in Irvine, where Herman Tang is pastor, has hovered between number 15 and 18 since 2010.

“We believe in what the SBC is doing,” Tang said. “We trace the root of this church back to the effort of Southern Baptist church planting. … I have always believed in the Cooperative Program because of the missionary strength, the sending out of thousands of missionaries overseas and at home here. This is tremendous.”

Mandarin Baptist Church of Los Angeles in Alhambra, where Peter Chung has been pastor since 1976, has been between 20 and 22 in California in giving through CP since 2010. When asked why Mandarin Baptist supports the Cooperative Program, Chung said, “First of all, we are Southern Baptist. Secondly, we agree with the philosophy of the Cooperative Program: caring people partnering together to touch the world for Jesus Christ.

(Willoughby is managing editor of the Louisiana Baptist Message.)