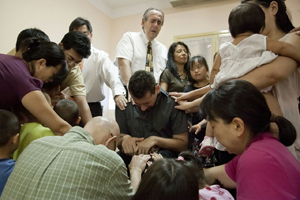 Born for this: autistic MK becomes missionary to Japan

“Sugoi is my catchphrase,” Steven explains, “so sometimes my friends call me ‘Sugoisteve.'”

But from Steven’s perspective, the “sugoi” part isn’t about him. It’s about God.

“I always want to give God the glory for what He has done in my life,” Steven says.

That attitude was evident as he stood before worshipers at a Japanese-Paraguayan house church in Asunci¢n, Paraguay. Accompanying himself on the guitar, he sang a favorite song by Casting Crowns, a contemporary Christian band:

Listening to Steven sing, his parents – missionaries from California Tim and Iracema Kunkel – wiped tears from their eyes. More than anyone else in the room besides Steven, they understood what these words have meant to him.

Steven couldn’t tolerate change, for example. He didn’t like to hug. He preferred being alone. He avoided eye contact, echoed others’ words and laughed at inappropriate times. He also had a habit of spinning himself and objects.

Today, as a missionary in Japan, Steven has only one of the 14 symptoms – inappropriate laughter – and it’s hardly noticeable. He taught himself how to manage it through Internet research.

Steven spent years struggling to overcome most of the other symptoms, and God used many people in that process. Steven’s parents created a structured and loving family environment, guiding him through the challenges of autism. His two older siblings, Julia and John Glenn, encouraged him with their love. Many believers prayed. Professionals like speech therapists and physicians provided specialized help. Strengthened by God and his support team, Steven himself did years of hard work.

“Sometimes it was like I was climbing a mountain, facing a lot of difficulties,” he said. “Whenever I felt a difficulty or a weakness come, I fell down. But I managed to get up and keep walking.”

And through God’s power, Steven has climbed to some amazing heights.

“Seeing through God’s eyes”
One of these was his commissioning as a missionary to Japan.

“I’ve felt today that so many questions about Steven’s autism have been answered,” his mom, Iracema, said, “like a veil is being lifted from my eyes and I’m seeing things through God’s eyes. I’m thinking, ‘For this day you were born, Steven.'”

Holding his well-marked Japanese Bible, Steven sat with head bowed as fellow believers surrounded him inside the Japanese-Paraguayan house church. The circle included church members, visitors and Japanese children Steven had taught at the church. His parents – International Mission Board missionaries in Asunci¢n – stood behind him.

The group laid hands on Steven as pastor Koki Nowada, his Japanese mentor, led in prayer. Nowada’s normally soft voice grew louder and more intense as he prayed in Japanese for God’s anointing on Steven.

It is a powerful moment for worshipers. Steven’s dad, Tim, sobbed with joy.

He remembers the day doctors diagnosed Steven with autism, not long after the Kunkels moved to Uruguay as new missionaries.

“It was like one child died and another child was born,” Tim recalled. “But God, in His permissive will, allowed this to happen. And God, in His sovereignty, had a plan.”

The Kunkels saw God’s plan unfold as they continued serving in Uruguay. Because few services for autistic children were available there, Iracema studied special education so she could teach Steven herself. In the process, she discovered a gift for working with autistic children. She began sharing that expertise with parents of other autistic children in Uruguay. In turn, God used those connections to open doors for the Kunkels to witness for Christ.

“I’m realizing now that a lot of what God has had us doing on the mission field – first in Uruguay and then after we moved to Paraguay – hasn’t been so much about us as missionaries,” Iracema said. “It was about Steven. It was like God was using us to help put all the pieces of the puzzle in place for Steven, so this autistic child could grow up to be a missionary for God’s glory.”

One important puzzle piece fell into place when Steven accepted Christ at age 8. Later at 15, he became interested in Japan. While visiting some friends in Uruguay’s countryside, he fell asleep under a tree. He dreamed a Japanese girl told him she wanted him to learn her language and culture. When Steven woke up, he had a strong desire to learn Japanese and travel to Japan.

“Now, I think it was kind of like the dream Paul had when the Macedonian called him to come over and help,” Steven said.

After the dream, Steven couldn’t stop thinking about Japan. But no Japanese people lived in Salto, the small Uruguayan city where his parents then served. So he began learning Japanese on his own.

Steven’s mom bought him a Japanese phrasebook in her native Brazil, a country with the largest Japanese population outside Japan. He taught himself all the phrases, and also became interested in Japanese cartoons called manga and began drawing his own.

Meanwhile, God was putting another puzzle piece in place.

Moving to Paraguay
When Steven was 16, IMB officials asked the Kunkels to consider transferring from Uruguay to Paraguay. By then, the Kunkels’ two older children had left home for college.

“Steven wasn’t sure if he wanted to (move to Paraguay),” Tim recalled. “And we weren’t sure about the wisdom of moving him to a new country as an older teenager.”

As the family prayed about the decision, Tim took a trip to Paraguay. There he noticed many Asian immigrants; one named Lily Maeda de Martinez waited on him in a store. Tim learned she was Japanese, born in Paraguay to Japanese immigrants. He told her about Steven and asked her to write him a letter in Japanese. Lily agreed.

When Tim returned home with the letter, “Steven was so excited,” Tim remembered. “That sealed it for him on going to Paraguay.”

With plans in place to move to Paraguay, the Kunkels left Uruguay for stateside assignment. In the U.S., Steven made some Japanese-American friends and learned more Japanese. He also rededicated his life to Christ at South Ridge Baptist Church in Jefferson City, MO. It was then God’s call to Japan became clear.

Soon God showed Steven something more: some of the Japanese manga he’d been reading had evil overtones.

“When I realized that, I tore up the bad manga with my bare hands,” Steven recounted.

From then on, he used biblical themes in cartoons he drew himself. Later he began composing sacred piano music.
“The Lord showed me He had given me gifts He wanted to use in Japan,” Steven said.

Preparing for Japan
But Steven needed Paraguay to get ready to go. And there God had people in place to help with that preparation.

Two of them: Japanese pastor Koki Nowada and his Japanese-Paraguayan wife Mari. They mentored Steven in Japanese language and culture for nearly seven years while he served in their congregation.

“We’re just a small house church, but we are a missionary church,” Koki Nowada said. “For the Japanese children (here), seeing Steven go to Japan as a missionary has been a wonderful opportunity to learn (about) the cost of discipleship.”

During Steven’s commissioning service, visiting preacher Jonathan Yao reminded those children – and their parents – that God wants to use them, too.

“If you say, ‘Lord, here I am,’ God will use you,” said Yao, a Chinese-Filipino pastor and a Kunkel family friend. “Don’t limit what God can do.”

God used Yao to open the door for Steven to serve in Japan, Tim noted.

“The missing piece in this whole puzzle was how Steven was going to get there,” Tim said. “That was a piece I just couldn’t figure out.”

In 2011 God provided that piece when Yao took Steven on a survey trip to Japan. Yao knew no Japanese pastors, but before the trip he made a connection with a Filipino congregation in the small city of Shiojiri, Japan. He and Steven visited the church.

Steven made a strong impression on the congregation, who’d been praying for more workers. To help them expand their outreach to the Japanese, the church needed a Japanese translator, someone to teach Japanese to Filipino church members and a worker to teach English to Japanese children. The congregation also needed help in music and outreach to Brazilian immigrants.

As church leaders got to know Steven, they realized his skills matched everything in their prayers – all in one person.

“Steven is a miracle, a grace from God,” the pastor told Yao. “Where God’s grace is, His favor is.”

The congregation then invited Steven to “come over and help them.” He said, “Yes.”

That was seven years after Steven dreamed about Japan as a teenager in Uruguay.

“Since that dream, there have been lots of struggles and tests. But my faith has stayed strong,” Steven says.

“Today, I’m sure Japan is the land God has been preparing me for.”

(April traditionally is Autism Awareness Month. Autism is a general term used to describe a group of developmental brain disorders caused by a combination of genes and environmental influences. In the United States, one in 88 children – and one in 54 boys – is affected by some form of autism, according to the U.S. Center for Disease Control. For more information about autism visit www.autismspeaks.org.)