Black So. Bapt. history said to be ‘at a crossroads’ – California Southern Baptist Convention
Skip to content 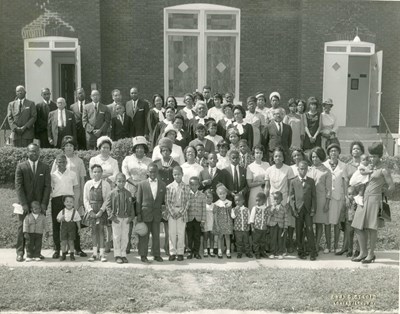 Black So. Bapt. history said to be ‘at a crossroads’

The story behind those numbers, historians say, is a remarkable narrative of slavery, sin, emancipation, struggle and God’s grace — and a challenge for the SBC to do more in terms of racial reconciliation.

“The SBC today is at a crossroads,” said Gateway Seminary professor Leroy Gainey, one of the first African Americans to join an SBC seminary faculty in the mid-1980s. Although race relationships are strained, “I do believe in our convention,” Gainey told Baptist Press, “and I do believe we can do the right thing.”

Together, but not equal

When southern slaveholders and slavery sympathizers established the SBC in 1845, about 100,000 of the 350,000 Southern Baptist church members were African American, according to Baptist historian William Whitsitt’s estimate published in the 1895 SBC Annual. The estimate was based on Whittsitt’s extrapolation backward from 1852 statistics compiled by Baptist statistician J.L. Burrows.

Mostly slaves, those black Southern Baptists often were allowed to vote on matters of church discipline and admission of new members to their churches, wrote Southern Baptist Theological Seminary historian Greg Wills in his book “Democratic Religion.” They also served on church committees and were recognized as messengers by some Baptist associations.

Still, churches expressed their belief in the “social inferiority of African Americans” by making them sit in the worst seats during worship and treating them “like children,” wrote Wills, dean of Southern’s school of theology.

Gainey, J.M. Frost Professor of Educational Leadership at Gateway, said many of those slave church members likely were forced “to be a part of the church” and received incomplete biblical teaching, with sermons and Bible lessons aimed at maintaining subservience on the plantation.

Much of African Americans’ spiritual growth, Gainey said, occurred in “hush harbors,” secret churches in the woods that taught the whole counsel of God.

Consequently, when slaves gained their freedom at the end of the Civil War, black Southern Baptists “looked for a comparable emancipation in their church life,” wrote Baptist historian David Bebbington in “Baptists Through the Centuries.”

SBC ‘lost half its membership’?

Soon, however, African Americans began to form their own state conventions — beginning with North Carolina in 1866 — and their own national conventions, including the National Baptist Convention of the United States of America in 1895.

New Orleans Baptist Theological Seminary historian Lloyd Harsch told BP the SBC may have “lost half its membership when African Americans left to form their own organizations.”

In 1880, the SBC reported nearly 1.7 million members in cooperating churches, according to statistical tables published in the Baptist Sunday School Board’s 1992 “Southern Baptist Handbook.” The number dropped to 934,000 by 1883 and did not rise back to 1880 levels until 1901 — despite “strong baptism numbers” during that period, Harsch said.

“I am convinced,” Harsch said, “that the primary reason [for the drop] is the loss of African American members.”

Statistical estimates published in SBC Annuals do not indicate the 1880s numerical decreases asserted by Sunday School Board statisticians. Nevertheless, Ethnicity, echoing the estimate of some scholars, surmised that “all of the black churches probably had withdrawn from the convention by 1900.”

The SBC remained virtually all white until 1951, when two black churches — one in California and another in Alaska — were received into local Southern Baptist associations and soon thereafter began cooperating with the SBC.

The Redwood Empire Baptist Association in northern California received Community Baptist Church into fellowship despite urgings not to do so by the then-executive director of the California Southern Baptist Convention and the then-president of the SBC, Gateway Seminary professor Rick Durst wrote in a 2004 article for the Journal of African American Southern Baptist History.

When death threats came to Fulfer, he replied, “You can kill me, but you cannot kill what was done,” according to a 2001 interview with Durst.

In a smoother welcome to the Southern Baptist family, Great Friendship Baptist Church in Anchorage, Alaska, was received into its local Chugach Baptist Association without a dissenting vote and also began cooperating with the SBC.

‘Easy not to remember’

Despite African American struggles against Jim Crow laws and other forms of racism, three decades later, the number of predominately African American Southern Baptist churches had increased to 600, with 100,000 members, BP reported in 1981.

A key factor in those gains, Gainey said, was efforts by the Home Mission Board (now North American Mission Board) to build and strengthen ties with black Baptists.

Another three decades later, in 2009, there were 3,434 predominately African American Southern Baptist churches with nearly 854,000 members, according to a 2014 report by the African American Advisory Council appointed by SBC Executive Committee President Frank S. Page.

Byron Day, president of the convention’s National African American Fellowship, told BP the SBC has become “a convention that must take advantage of its diversity and all that every group can bring to the table.”

The convention “must better foster unity in diversity,” said Day, pastor of Emmanuel Baptist Church in Laurel, Md. There remains “a need to be intentional in involving, in this case, African Americans in leadership — whether it be in our Executive Committee, whether it be in our entities.”

Black History Month, Day said, should inspire Southern Baptists to consider the need for greater ethnic involvement. A black history emphasis is needed “because it’s so easy to not remember where we’ve come from.”