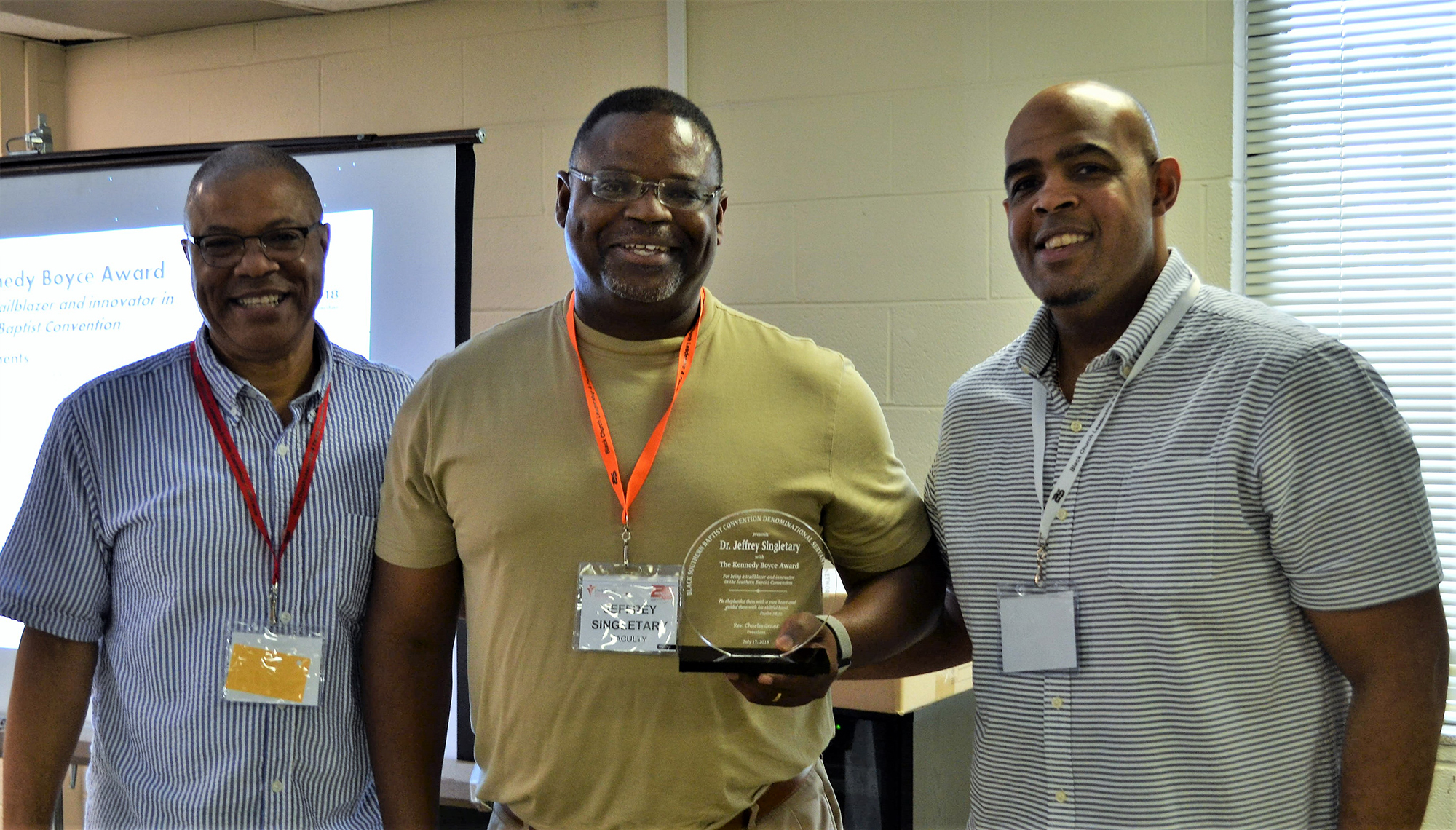 Jeffery Singletary, a regional catalyst for the Florida Baptist Convention, is the 2018 recipient of the Kennedy Boyce Award, named for late pastors who were the first African Americans to link their churches to the Southern Baptist Convention.

The network (BSBDSN) honored Singletary at its July 17 meeting held during the 2018 Black Church Leadership and Family Conference.

Singletary, also elected 2018-2019 BSBDSN president, was noted as a trailblazer and innovator in Southern Baptist life. He was recognized as the founding director of Huddle Touch Ministry that activates churches in reaching up to 8,000 high school athletes and coaches annually. More than 700 have accepted Christ through the ministry, BSBDSN said in honoring Singletary. “Feeding the 5,000” evangelistic crusades Singletary spearheaded through the Florida convention to the U.S. Virgin Islands after the 2017 hurricane season were also noted.

Beverly Sonnier, content editor of the LifeWay YOU Sunday School curriculum now in its 10th year, was the first woman to receive the BSBDSN Hall of Servanthood Award for outstanding career contributions. Sonnier implemented and facilitated an annual writers’ development conference that has trained 52 new writers of color for the YOU curriculum.

James Jenkins, church planting director of the Louisiana Baptist Convention and pastor of Baptist Bible Fellowship in Shreveport, was honored with the 2018 Denominational Servants Award for modeling the highest characteristics of network servants. The award was inspired by Emmanuel McCall, the first African American professional employee of the Baptist Sunday School Board, now LifeWay Christian Resources. Founding the Louisiana African American Fellowship and increasing the number of black churches in the Louisiana Baptist Convention by 450 percent were among Jenkins’ accomplishments the BSBDSN noted.

Byron Day, immediate past president of the National African American Fellowship of the SBC and pastor of Emmanuel Baptist Church in Laurel, Md., was honored with the Denominational Appreciation Award. His former presidency of the Baptist Convention of Maryland/Delaware and his work as a missions team leader to unreached people groups in Tanzania were among Day’s achievements the award recognized.

Roy Cotton Sr., director of African American Ministries of the Baptist General Convention of Texas (BGCT), received the Denominational Leadership Award. His 16 years as a BGCT church starting consultant, 21 years of leadership with the Baptist General Association of Virginia, and his service as founder and immediate past pastor of Centerpointe Church For The Communities in Red Oak, Texas, are among Cotton’s achievements the BSBDSN noted.

Founded in 1996, the group seeks to provide networking, mentoring, fellowship, professional career development and guidance among black Southern Baptist denominational servants. Providing a forum for problem-solving and a periodic news bulletin also are among the group’s stated goals.

How to become a member

BSBDSN membership is open to African American Southern Baptist part-time and full-time employees of SBC entities, state conventions and associations, and the Woman’s Missionary Union. Membership fees range from $25 for students, $250 for institutional memberships and $500 for 10-year memberships.

Join by contacting Singletary at jsingletary@flbaptist.org.