Bill Agee: “The world has come to us” – California Southern Baptist Convention
Skip to content 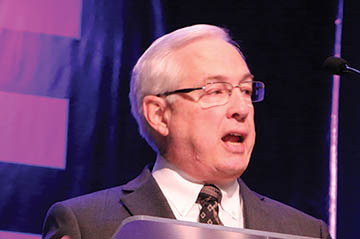 Bill Agee: “The world has come to us”

RIVERSIDE — California Southern Baptist Convention’s new executive director told messengers and guests at CSBC’s 77th annual session that “we have a tremendous opportunity and a tremendous responsibility” to share the gospel.

“The world has come to us,” Agee said of California. “From everywhere in the world, they live here, and we have the responsibility to take the gospel to them.

“What will it take to see hundreds of thousands of people come to Christ?” he asked. “We’ve got to be on purpose about seeing new churches started in strength, not in survival mode.”

California is diverse, Agee acknowledged, but “don’t be worried about the diversity — celebrate it!”

Of his new task as executive director, Agee said, “My job is to hear from you, formulate a plan and make the plan work.”

He has visited with a variety of groups throughout the state, including pastors, directors of missions, church starters, ethnic coalitions, CSBC staff and others.

But of proposed changes in the Convention structure and purpose, Agee was quick to say, “We’re not gonna do it for you — we’re not going to do your church stuff for you. We’ll be right there with you, right alongside you.

“There’s going to be change,” he stressed. “Change is difficult — our staff has had to deal with some of that.”

The Convention restructuring and call to win California for Christ “sounds like a challenge, and it is. I believe in challenge,” Agee said. “At this moment in time we find ourselves poised to make a marked impact for the gospel.”

Describing the pioneers who ventured West, Agee said of California Southern Baptists, “We’re going to be ‘on purpose’ pioneers.”

He said if he had been born in a different time he would have been a pioneer, though the journeys were not romantic — the pioneers faced hardship, sorrow and frustration.

“I don’t pretend to stand here without recognizing that many people have gone before us to get us where we are. I don’t take that lightly. They sacrificed for us.”

The pioneers were pursuing their dream, Agee noted.

“Are we willing to face those kinds of difficulties to see our dream come true?

“I believe we are willing to make those sacrifices to see God’s Kingdom increase,” Agee declared.

“Do we have all the answers? No. But we have a dream. Is it going to be done without sacrifice? No. But it can be done.

“And I want to see it more than anything else,” Agee said with emotion.

Every church and believer has a chance to go on this exciting journey, he added, warning the transition will “cost us something. And if we see this happen, we’ve got to be willing to pay the price.”

Agee said he will provide leadership to the Convention, but it’s “a team effort. I need you, to be a good leader.”

“None of this dream and none of this vision will happen without all the churches in California saying, ‘Yes, I’m gonna play,’” Agee challenged.

“Your state convention is limping by,” he lamented. “You know why? About half our churches don’t play! And until they do, we’re not going to see happen what I’m talking about. We’ve got to see every church play.”

Some are waiting on the sidelines but “the time has gone by for that,” Agee declared. “I need you to be involved. We need you now. We can’t do this without you.

“It’s not going to be ‘take California for Christ’ until you step up and play.

“It’s time for California Southern Baptist Convention to grow up.”

His call to serve in California has given him strength and courage, Agee said.

“But it’s given me a great challenge, and I’m not going to shirk that.

“All of us are invited to join in this pioneering adventure,” he said. “It may look different than we thought it would, but it’s going to be exciting.

“This involves a faith journey. It may mean we have to forget some things we did before. We may have to do some things we haven’t done yet. But we need to remember, God wants us to reach out … and know that He’s there.

“I’m asking you, join me in this journey.

“You called me here, and it’s too late to change your vote!” he quipped.

“We’re going to resource the vision of our churches,” Agee stated. “Will you step up? Will you commit to accept the challenge and go take Christ to California?”

Following the message, AB Vines, CSBC president, asked those in the audience to come forward and pray for Agee and his wife, Pam.