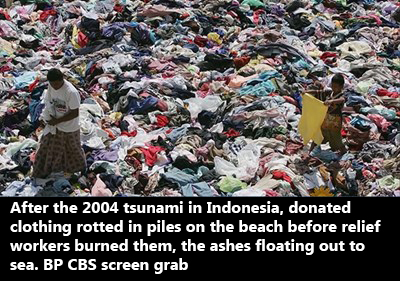 Best ways to give in times of crisis

HOUSTON (BP) — Mickey Caison has seen it many times in his disaster relief career. Well-meaning folks collect a truckload of food and clothing, drive perhaps hundreds of miles to a disaster zone, but can find no place to deliver the goods.

Deciding “let’s put a trailer on the lot and fill it up with goods to take to Texas, is the most ineffective way of providing support,” Caison told Baptist Press from Houston, where he is coordinating the Southern Baptist Disaster Relief (SBDR) response to Hurricane Harvey’s destruction there.

“We’re actually seeing vehicles — vans, pick-ups, rental trucks, there have been 18 wheelers — that are riding around trying to find some place to give goods that they’ve collected in other places,” Caison said. “Out of the goodness of their hearts, they were moved to action in meeting needs.” But they failed to consider such details as actual needs, warehousing, distribution and whether the same goods could be purchased locally, he said.

More effective responses include donating cash through trusted channels and providing supplies expressly requested by churches and other organizations, Caison told BP. Southern Baptists may also receive official response training in advance of disasters, allowing them to volunteer in such areas as feeding or debris removal.

Buying gift cards and bank cards that allow survivors to purchase their own choice of goods is also an option, as it gives the recipient dignity while stimulating the local economy.

“It’s so much better to be done that way,” he said, “and more effective in meeting the [fluctuating] needs of clients.”

These channels are “the best way to help if you want to give a financial contribution,” Palmer told BP. “And we’re [BGR] mobilizing [trained] volunteers, we’re mobilizing resources that are close to the source.”

It’s much more effective to buy goods near areas where a particular disaster occurred, Palmer noted, as it drastically reduces shipping costs and stimulates the local economy. Coordinating responses with Baptist partners in disaster zones improves distribution by making sure the neediest people are helped, Palmer said.

Donating cash to organizations coordinating water purification systems, for instance, is 1,166 times less expensive than shipping water to a disaster zone, and generates no plastic trash, according to CIDI. It costs $350,000 to purchase 100,000 bottles of water in Miami and ship to the Dominican Republic to hydrate 40,000 people for a single day. Conversely, investing in local water purification projects can hydrate the same number of people for just $300 a day, CIDI said.

“Generally after a disaster, people with loving intentions donate things that cannot be used in a disaster response, and in fact may actually be harmful, and they have no idea that they’re doing it,” former CIDI Director Juanita Rilling said on the Sept. 3 edition of CBS Sunday Morning. “The thinking is these people have lost everything, so they must need everything.”

People send anything, Rilling said. After the 2004 tsunami in Indonesia, donated clothing rotted in piles on the beach before disaster workers were forced to burn them, the ashes floating out to sea. After the 2010 Haiti earthquake, mothers in the U.S. collected breastmilk to send to the island, creating the nightmare of keeping the milk fresh and certifying its safety.

When unrequested “stuff” arrives, Caison has a saying for it.

“Stuff stands for <i>strategic things useless to frantic folks</i>,” said Caison, who retired in August as executive director of NAMB’s disaster relief and is working in Houston as a consultant.

“In Hurricane Hugo in 1989, people would bring clothes and dump them into our parking lot at the church, and I literally hauled two truckloads of clothes to the landfill because they were on the parking lot, they got wet, and nobody wanted them because they’d become mildewed and molded,” Caison said.

“During 9/11, I saw pallets of socks stacked on street corners. The mayor said our firemen need socks and literally the nation hauled socks to New York City,” Caison recalled, “where you had less than 300 acres that were affected and the rest of the city was operational. But socks came from all over the country. They didn’t know what to do with them, so they unloaded the socks on the sidewalk.”

“If that’s not being asked for, then donations to your favorite response organization can be given. All of us have a convenient way; churches can take up offerings,” he said. “In reality, it’s going to take years for this community to recover. That means, three, four, five years from now, people are going to be volunteering, and we’re buying lumber to help people get back into their homes.