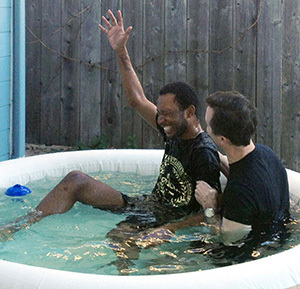 BAY AREA (BP) — California is a changing mission field — but one with a consistent need for new churches.

“However, we are starting to see some momentum.”

Only 7 percent of metro San Francisco residents affiliate with an
evangelical church — one of the lowest percentages of all of North
America’s large cities. The region has only one Southern Baptist church
for every 17,139 people.

Through Send North America: San Francisco, Southern Baptists have
been working together the last few years to impact the spiritual destiny
of the area by starting new churches. Southern Baptists have been in
the Bay Area since the days of the Gold Rush (First Baptist Church in
San Francisco was the first Protestant church in California in 1849).
But the Bay Area has always been a tough mission field — particularly
during the last few decades, Johnstone said.

A new generation of Southern Baptist church planters is trying to
change that, he noted, describing new church planters who are just
beginning evangelistic works throughout the metro area.

Brett Butler, a church planting apprentice in Redwood City, first
felt called into missions a decade ago, not long after he became a
follower of Jesus. Yet for eight years, he said, God left an important
part of his family’s mission call unknown — where He was sending them.

Two years ago, while sitting in Buck Run Baptist Church in
Frankfurt, KY, Butler started reading Annie Armstrong Easter Offering
materials about a San Francisco church planter. Almost immediately, God
began to pull Brett and his wife Patti toward the Bay Area. He had
attended college at the University of California at Berkeley, and his
parents lived in Southern California.

“The whole Bay Area just made a ton of sense, looking back at our
lives,” Butler said. “So we went back home and clicked the ‘Mobilize Me’
button on the NAMB website. And they had a great system — people
e-mailed us and called us. We had trips out here. … It just became
really clear that this is what God wanted us to do.”

The couple led their first person to faith in Christ before they
even arrived on the field full-time. While visiting Redwood City they
met Gina Plute, who asked them why they were there. When the Butlers
told Plute they were interested in starting a church, she said she
thought they should start one in Redwood City.

Although she had experienced much success in life, she said she
felt like something was missing. Finding out more about God, she
thought, might be that missing link.

“So when do we get started?” Plute asked.

The Butlers then had to tell her they lived in Kentucky, and that
it would take some time to get started. Still, they offered to do a
Bible study with her over the Internet. Starting in December 2014, the
three of them studied the book of John together. Last February, as they
studied John 3:16, Plute committed her life to Christ. Three others have
come to faith in Jesus since the Butlers arrived in the Bay Area in
May.

As the county seat of San Mateo County, Redwood City has about 76,000 people and a small evangelical presence, Butler noted.

His partnership with California Southern Baptists — and Southern
Baptists in general — plays a crucial role in his church planting
efforts, Butler said. Besides financial resources through the
Cooperative Program and the Annie Armstrong Easter Offering that make
it possible to live in one of the most expensive areas in the country,
he pointed to the relational support provided by Southern Baptists.

“We’ve gotten hand-written encouragement cards in crayon from
third-grade Bible study classes in Florida that we’ve never met,” Butler
said. “It just brings tears to your eyes. We have people write us from
Virginia, Ohio and Texas and places like that.”

Noting the significant spiritual need in the Bay Area, Rich
Johnstone said partner churches from outside the region play a critical
role in reaching people there. Because of the region’s diversity, many
Bay Area church planters lead language churches or culture-specific
churches.

“We love to partner with traditional large-launch church plants in
the area, but we also have a corresponding need for churches who will
come alongside these planters who speak a different language or come
from a different culture,” Johnstone said.

For more information about starting a church in California contact
the California Southern Baptist Convention church starting group at
559-229-9533, ext. 263 or visit www.csbc.com/churchstarting. Learn more
about the Annie Armstrong Easter Offering at www.AnnieArmstrong.com.