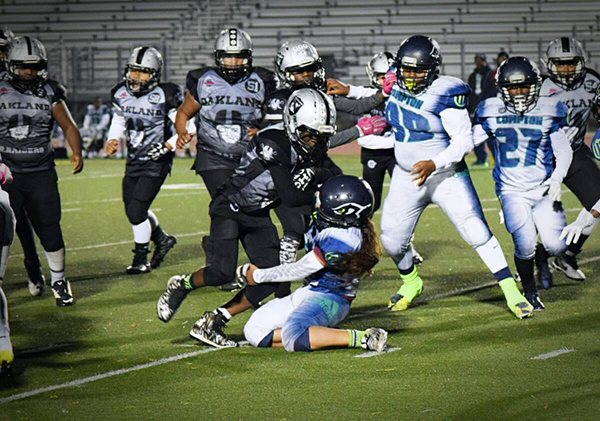 OAKLAND — It’s working for pastor Mustafa Muhyee and the leaders of B.A.S.I.C. Ministry, a seven-year-old church plant in Oakland.

Their youth football program, the Oakland Jr. Raiders, is a team of the Snoop Youth Football League (founded by entertainer Snoop Dogg). In its eighth year, the program accounts, Muhyee said, for “probably half our membership” at the church.

Football as a church planting strategy is devotions and prayer at practice. It’s gospel artists and prayer booths and rap sessions at games and as half-time shows. It’s food distribution and free haircuts at games. It’s a lot of the 150 players and 72 cheerleaders having life lessons and conversations in the car with adults who are committed Christians, on the way to and from practice. Mentoring.

It’s troubled teens like Earl Johnson and Demaria Day, whose lives are turned around by the gospel. It’s 28-plus families, like the Ramirezes, coming to faith and plugging in to B.A.S.I.C. Ministry. It’s hundreds of East Bay residents, about 400 per game, hearing the gospel over the course of a football season.

Snoop Dogg just happens to have founded the league. Last year the Oakland Jr. Raiders won the state championship, earning them a trip to Houston to play in the national championship game — a lifetime highlight for a crew of kids who’d mostly never left the Bay Area, much less flown on a plane halfway across the country.

And the church was recognized by the City of Oakland for their community service through Oakland Jr. Raiders.

“The Lord has placed us here to evangelize and (for) outreach. And football is one of the key elements of our evangelistic ministry,” said Muhyee, an East Bay native who is the high school football coach at Madison Prep Academy.

“Through football, we are sowing into our neighborhood and community. At least eight families, if not more, have come to the church through this football program.”

The Oakland Jr. Raiders (ages 5-14) isn’t your run-of-the-mill church or Pee Wee League. For one thing, most of the players are from rough East Oakland, Richmond or Berkeley neighborhoods — single-parent homes, homes without fathers or maybe any adult male figures; neighborhoods with too many drugs, gangs and crimes, and too little priority on education.

Mustafa and other coaches have to transport most of the players to and from practice because their parents cannot.

When a player can’t afford the cost ($175), program leaders seek sponsors, donors and scholarships, and do their own fund-raising. They award 15-20 scholarships per season.

Muhyee and Solomon Ervin, the B.A.S.I.C. deacon who oversees the football program, have bona fide football backgrounds themselves — a combination of having played in high school, some college and coaching as a career.

“All of our coaches are believers who view what they do as a ministry,” Muhyee stressed. “So many of our kids are coming out of rough places. Our football team is a safe haven for them. They can be embraced by men who love the Lord, they can hear positive encouragement and feedback — no cussing allowed!

“Our staff are people of integrity and character, and this attracts the kids. They can really feel the love of God, they can see men who are raising children, mentoring, visiting them at schools.

“We try to be light and hope in their lives,” Muhyee added. “If we don’t get them, the drug dealers and gang bangers will.”

Muhyee said his favorite part of the program is the drive with players: “I get to sow into their lives, individually, drop nuggets of wisdom, do more than coach football.”

Football is just one aspect of B.A.S.I.C.’s evangelistic focus. There’s also a food ministry (off the field as well), summer services at the park and mentorship.

“I’m involved with this because of the unity it brings among youth, parents and community,” said Ervin, who is himself studying for a degree in sports business management. “If the kids don’t get teaching about God at home we provide it here.

“Ultimately our goal is to see these kids saved, and see them excel, go to college.”

Muhyee adds: “It has been an awesome journey, watching God draw people to Himself, giving us influence with the City Council, growing the church through football.”

Through it, Ervin said, “I see a sense of hope for these kids.”

A church planting strategy any believing football enthusiast can endorse.