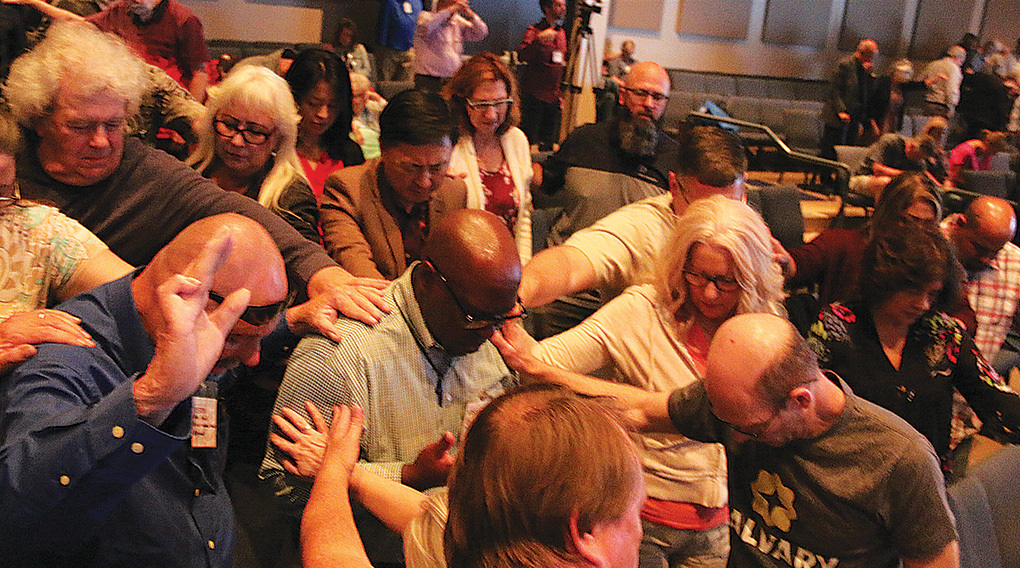 Balancing opportunities and barriers in California

FRESNO — Nearly 2,000 people participate in worship each week at New Vision Church in Milpitas, with services in Korean and English.

“Building God’s people to transform the world” is the church’s mission statement. Evangelism, discipleship and leadership development are major components of New Vision, where Jinsoo “David” Yi has been pastor since 2010.

Members also participate in short-term mission trips to Thailand and Turkey, while others reach out locally and through church programming such as Awana.

“We must continue to build and train God’s people to cultivate leadership that will exert the influence of God’s Kingdom in our homes, churches, neighborhoods and the world,” New Vision’s website says (newvisionchurch.org).

“We have a mission to preach the gospel first, targeting Asian-American diaspora scattered around the world, according to the sovereign situation God has given us.”

New Vision is one of many Southern Baptist congregations in California that are focused on reaching outside their primary culture to other people groups.

Center Point First Baptist Church in Salida, where Gary Dew has been pastor for 36 years, is starting an Hispanic work, reported Rod Earls, director of missions for Central Valley Baptist Association headquartered in Turlock. Center Point also sponsors a child living in an orphanage in Haiti, and locally ministers at the Modesto Gospel Mission.

Dove Christian Ministries in Oxnard, started in 2000 and led since June 2018 by Pastor Lou Rogers, began as an African-

American church but is now “pretty much an Anglo church right smack in the middle of an Hispanic community,” reported DOM Vern Hancock of Gold Coast Baptist Association. “They are reaching out to Hispanics in various ways but very specifically by offering ESL (English as a Second Language) classes.”

In addition to church programming and prayer, Dove serves through a jail ministry and Bikers for Christ, a motorcycle outreach.

Randy Bennett, DOM for Kern County Baptist Association, told the California Southern Baptist, “Valley Baptist Church (in Bakersfield) has a great story that needs to be told. They started working in southern Mexico a number of years ago with an unreached people group (and) discovered that (the people group) had a direct link to Kern County.”

In addition to the sizable group of southern Mexicans living in Taft that Valley Baptist ministers to, they have started five churches — Arabic, a Set Free congregation, one Hispanic and two primarily Anglo churches. Roger Spradlin and Phil Neighbors co-pastor Valley Baptist, where about 4,000 people attend weekly services.

Greg Holmes, DOM in Mendo Lake Baptist Association, reported that Ken Word, pastor for 29 years of Bethel Baptist Church in Fort Bragg, has over the last three years “developed a strong relationship with a Hispanic group that is now meeting in the church in an integrated fashion.”

“There are several of our churches which are seeking to reach ‘the surrounding community,’ which means they are multi-cultural by virtue of the neighborhood makeup,” said Michael Proud Jr., DOM for Orange County Southern Baptist Association.

“Huntington Beach Baptist Church (primarily Anglo) is working to reach Korean-speaking people as a ministry of the church, as opposed to starting a Korean-speaking church plant,” Proud continued.

“Saddleback Church is continually looking for ways to reach other language groups as part of their church. Berean Community Church started from a Korean English-speaking ministry but is reaching many different Asian English-speakers in their congregations,” Proud said.

“It is a great bi-cultural congregation with about a 50-50 split between Anglo and Filipino,” Lawler said. “The pastors are Anglo but the worship team is mostly Filipino and they have an annual mission trip to the Philippines to support pastors, churches and a seminary over there.”

In Sequoia Baptist Association, “the one church that is doing the most in reaching an ethnic group outside its primary culture is the Messengers Church in Visalia,” DOM Sal Fernandez told the CSB.

“They purposely called a bilingual pastor, Nestor Amaya, to be able to reach both the English and Spanish community.”

Southern Baptist leaders across California say there is much left to be done in language work, with many people groups unreached or under-reached.

Long Beach and San Diego have a Cambodia-town; there is a Little Saigon in Orange County; San Jose has a huge Vietnamese area; there are several Filipino enclaves in large cities and lots of large Filipino “cities;” San Francisco, San Jose and Los Angeles have the only remaining “Japan-towns” in the US; and Fresno has the largest Laotian/Hmong community in the United States.

Yuba City is a hub for Sikh Asian Indians, and an area of Los Angeles known as “Tehrangeles” is home to Iranians; nearby are people from Afghanistan.

“Some day every knee will bow and every tongue confess Jesus is Lord,” said a church planting catalyst who asked to not be named because of the people groups they work among. “That means every tribe, every language, every people group, every nation, and we get to be part of that. Wow!”

(Third in a series on ethnic ministry in California.)